One billion illiterates: a challenge for our time

Our world is at once far more populous, more complex and more interdependent than it was thirty years ago when Unesco defined an illiterate person as someone "unable to read, write and understand a brief and simple exposé of facts in relation to his or her daily life".

More populous: the world's population has risen from 3 billion in 1960 to an estimated 5.3 billion today. Efforts to eradicate illiteracy have been colossal but they have not kept pace with the demands of explosive rates of population growth. Almost one billion adults in the world today are still unable to read or write.

More complex: a technological revolution in telecommunications and computers has called in question the very concept of "traditional" literacy. The industrialized countries have discovered that a problem once thought definitively solved by the provision of free and compulsory education is obstinately persistent. Meanwhile, in many of the poorest countries, progress along the road to universal primary education made in the 1970s has been halted by economic crisis.

And yet in some ways things have not changed. Now as then illiteracy goes hand in hand with hunger, poverty and isolation. While it may not preclude knowledge or wisdom, it bars access to modern knowledge and deprives its victims of a means of active participation in the life of the community. There is still a widening "gender gap" between male and female literacy.

At the same time the sense of interdependence has become stronger. Whereas it is for each country to face the problem of illiteracy within its own frontiers there is a feeling that the question of world illiteracy is of concern to all, and a realization that measures to improve the situation will be vain if isolated from attempts to improve conditions of health, housing and employment. 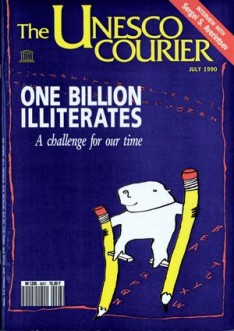