Rare are the ideas that, in response to some hitherto unexpressed popular expectation, trigger a determination for change, mark a break between the past and the future, and quicken the pace of history.

Rarer still are those ideas which have crossed the frontiers of the time and place of their conception, and germinated much later in other parts of the world.

How does the great idea of 1789, that of "man as a citizen", stand up today? Rooted in a specific culture - that of Europe - and a particular century  - the age of the Enlightenment - it is now universally accepted. After, it is true, a circuitous journey which saw it by turn debated and rejected, ignored and rediscovered, tolerated by some and demanded by others, until in 1948 it inspired a Declaration of Human Rights which was adopted by the international community.

Out of this idea, diffused around the world by both French and foreign contemporaries of the 1789 Revolution - Bonaparte, Jefferson, Goethe, Mirand - arose a great hope for universal fraternity. But this hope was gradually thwarted by theories which affirmed the preeminence of the collective spirit over individual liberty. During a long period it was betrayed by the process of colonial expansion, which substituted the notion of the civilizing mission of the West for the dream of the equality of people everywhere.

In some cases modern movements for national emancipation regarded the principle of the rights of man and of the citizen with renewed esteem, but often the concept of the revolutionary state was preferred instead. Finally, in the last decades of the twentieth century, the Declaration of 1789 has come to be seen as a fundamental guarantee of freedom for each people and a framework for understanding and cooperation between all peoples.

This issue of the Unesco Courier attempts to highlight some milestones on the itinerary whereby this idea born in the wildest dreams of a handful of visionaries has become part of the common heritage of humanity. 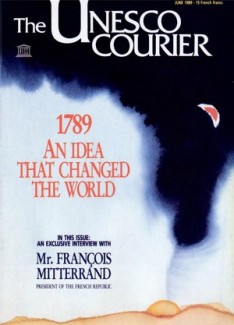