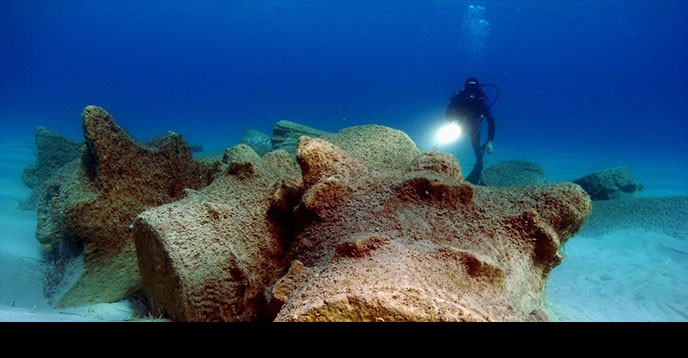 The French writer Jean-Marie Blas de Roblès tells how he pursued his dream of uncovering “fragments of raw beauty long since forgotten” from the depths of the sea, an emotional experience very different from a treasure hunt. Between 1986 and 2001, the novelist took part in underwater archaeological excavations off the coast of Libya, exploring that “unseen part of ourselves” which must be carefully and respectfully protected.

It all began in 1985. Not long returned from his first terrestrial dig with the French archaeological mission in Libya – one of the privileges of friendship – Claude Sintes [Director of the Museum of Ancient Arles] wasted no time in sharing his experiences with me: coming from Apollonia, he had seen Cyrene, Sabratha and Leptis Magna – Greek and Roman remains surpassing in size everything we knew or could have imagined. He said he had no idea that whole towns lay buried under the sand of the seashore in such wondrous and magnificent settings.

But even better was the fact that hardly anyone had ever thought of exploring the seabed off this coastline. Everything was still exactly where it had been in the seventh century B.C.! Imagine the fabulous finds there might be! Ancient shipwrecks for certain – because the shores of the Gulf of Sidra had always been among the most inhospitable coastlines in the world – but also buildings swallowed up by the sea and statuary and materials of all kinds… Furthermore, he had secured permission to organize an underwater archaeological campaign for the following summer!

He dealt with the technical side himself, but there was still the question of recruitment. The Libyan regime did not license small trading operations, so it was extremely difficult to arrange for the expedition’s supplies. As for the conditions of the excavations and the accommodation, they would be even worse: “Spartan” seemed rather a mild euphemism to describe the situation. Therefore, he had to be able to have a technical team in which he had complete confidence, and people he could count on to be available at all times. I had an adequate knowledge of archaeology and genuine experience of the sea, and I was used to living in confined spaces: if I wouldn’t mind doing the cooking as well as working on the digs, then I would be the first recruit…

So that is how it all began. I jumped with joy when I agreed to go – I would even have done the cleaning if it had meant going with him to Libya! – but I never suspected that my contiribution, and that of all the other members of the team, would actually begin with precisely that kind of work.

In August 1986, after a three-day journey, we were ready to get down to work. The first day was spent making our site headquarters habitable. It was a dilapidated house from the Italian colonial period infested with scorpions and huge dark brown cockroaches. The next day, an initial reconnaissance of the site with mask and snorkel confirmed the observations of the American archaeologist Nicholas Flemming; as he had noted in 1957 after his first survey, the buried structures of the port of Apollonia were clearly visible and without doubt they justified the excavations we were going to undertake.

On a more personal level, they immediately prompted me to discover a universe I had hitherto believed to be the preserve of literature. In a single leap I had been transported to the worlds of Jules Verne and H.G.Wells – the worlds of Twenty Thousand Leagues under the Sea and The Time Machine came together in the joyous feeling of knowing for certain that I was swimming over the abandoned city of Atlantis!

It had come to my love of Greece through an acquaintance with the pre-Socratics, and I fell in love with Antiquity through baptism in the warm waters of Apollonia. Practised in hunting with a harpoon since my early adolescence, I had regarded the depths of the sea – the fields of laminaria, the rocky caverns covered with spiky coral, the wavy formations of sand – merely as the hiding places or clearly designated locations of my prey. These all too familiar underwater landscapes assumed a phantasmagorical dimension in reality: in one direction, there would be an alignment of Cyclopean blocks dovetailed together; in another, a square tower, and beyond that banks of oars for triremes sculpted in the rock, and in two metres of water a fish tank described by Vitruvius [the 1st century B.C. Roman architect], with its fitments for octopuses and morays…

Everywhere, between each stone, each structure that was more or less discernible beneath its covering of algae, there lay visible, and easily within reach, dozens, indeed hundreds of objects that were deserving of places in museums or at least in archaeologists’ archives: the bellies and bottoms of amphorae from all periods, stamped Rhodian handles from the 6th century B.C., Roman cups, broken decorative vases…

A world was lying there, set as in the aftermath of a disaster, and on display for the pleasure of those willing to take an interest in it. All that remained of Apollonia, the Greek port of ancient Cyrene sung of in olden times by Pindar or Callimachus, was a tongue of red land bristling with Byzantine columns, a theatre on a hillside and various later developments. But a few metres from the coast, awaiting visitors, was a city that had been swallowed up like Pompeii. An incredible prize for the scientist and a gift from the gods for the dreamer I have never ceased to be.

Underwater archaeology is of course no different from terrestrial archaeology; they use similar techniques even if underwater excavations are more complicated to undertake and require special equipment and even specific skills. n our case, the working conditions were particularly complex. In the absence of a boat we had to transport bottles and equipment to the beach on foot. To reap the most benefit from our time there we had agreed to do two dives a day. Three hours in the morning, followed by refilling the bottles on the shore, and another three hours in the afternoon. We then had to take all our equipment back to the stores, clean it and maintain it, compile an inventory of what we had found… and then cook dinner.

ncluding the land-based team I had about a dozen mouths to feed every evening; the mission had a container of melted cheese, powdered orange juice, spices and biscuits… As it was impossible to obtain any staples in the State shops, we bought from our Libyan friends the sugar, pasta and rice I needed to put together the stopgap recipes concocted by my mother. Although our daily menu was regularly improved by fish – the grouper we caught on Fridays – I still marvel at how we managed to avoid a general mutiny! Especially as we only had water from a tank. It was also best not to think about it too much when you had to remove the mosquito larvae from your glass before you drank from it. After dinner, there was an account of the day’s digs and then we drank mint tea on the terrace, keeping an eye out for scorpions scuttling up towards the light.

In fifteen years of missions, the list of our misadventures would be enough to put anyone off contemplating a career as an archaeologist: the snake under the sheets, the scorpions in the shoes, fishing with hand-grenades not far from where we were diving, warning shots from a heavy machine-gun when we got too close to a restricted zone, shortness of breath in stormy seas, etc. Surprising as it may seem, none of our misadventures ever lessened the joy of taking part.

After the 1986 mission our results were so encouraging that the underwater team secured permission to study the port of Leptis Magna. Prospecting the following year led to our surveying a submerged jetty, and that significantly altered our understanding of the town’s importance in the Severian period [from the end of the 2nd to the beginning of the 3rd century]. Meticulous study of the port of Apollonia made it possible not only to understand the way it had developed from its Greek origins to its abandonment in the seventh century but also to determine the sinkage coefficient of the land involved in its partial engulfing. This work led to the discovery of a Hellenistic wreck and to the unearthing of innumerable pieces of pottery, coins and statuary.

My initial motivations for engaging in this kind of work included a spirit of adventure, friendship and the writings of Albert Camus [Nobel Prize for Literature, 1957] on Tipasa and Djemila [two Algerian sites on UNESCO’s World Heritage List], but I was never attracted by the idea of a “treasure hunt” as such. Although I did once find a very rare gold solidus and the excitement was breathtaking, it was not at all because of the object’s monetary value. It was because of the way in which this small shiny disc was spinning in the blue water, reflecting the sun like a mirror, and because of the inexpressible joy of having brought up from the depths of the sea a fragment of raw beauty long since forgotten. It is a process that is, ultimately, very close to that which is involved in writing, and of which to my mind one of the most truthful metaphors is provided by the French novelist Serge Brussolo’s Le Syndrome du scaphandrier (The Deep Dive Syndrome) in which day after day a hunter of dreams plunges into the darkness of sleep; from this parallel universe he comes up with ectoplasms of various kinds, strange fictions which take root in reality and manage to acquire a real existence.

Fifteen years on, another discovery demonstrated even better the reasons for my perseverance. During the underwater excavation of the Roman fish tanks of Apollonia, Claude Sintes and I had the good fortune to dig up a statue of Dionysus. Once we got it on to dry land it was examined and then it became clear that it matched a statuette of a satyr found in 1957, and which Nicholas Flemming is seen holding, as if it were a newborn child saved from the sea, in a photograph taken after one of his dives. Almost 50 years later we had just reconstituted a “drunken Dionysus” who had crossed the ages and seemingly given some dramatic irony to his surname “twice-born”.

Archaeology renews bonds. More than any other discipline it brings together and reconciles the living who have been separated over the centuries. The sub-aquatic heritage is more directly accessible and often better preserved and more homogeneous than its terrestrial counterpart. Furthermore, it is unexplored. When we think, for example, of the still mysterious 1,500 kilometres of Libyan coast, we are readily persuaded that this invisible part of ourselves must be protected with every bit as much care and respect as the part that has already come to light. 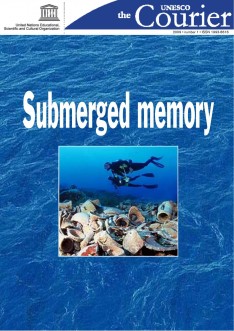