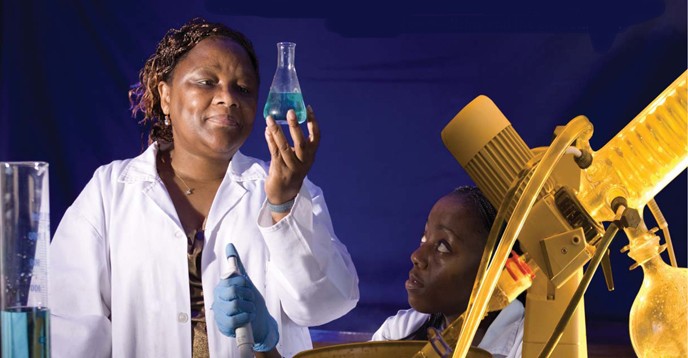 What is the common thread that could possibly link denim jeans, cancer and pesticides? None is evident. Yet when South African chemist Tebello Nyokong describes her fascinating research, the link that emerges is light. Nyokong, a specialist in nanochemistry, loves laser, and is using it in ways that could have a revolutionary impact on medicine and the environment.

Professor Nyokong, you are currently involved in research on a new cancer diagnosis and treatment methodology, intended as an alternative to chemotherapy. Can you give us a simple explanation of your work?

As chemists, we are designers. My research deals with the development of drugs from compounds called phtalocyanines. We call them dyes because their molecules are similar to those of dyes you use in colouring blue jeans. They are used in a treatment of cancer called photodynamic therapy, or PDT. It’s a multidisciplinary approach – chemists, biologists, biotechnologists are working together. As a chemist I am in the centre of it because I make the molecules. I have a big team, about 30 people. And then I have other people all over the world who are doing the preclinical testing.

Look at a plant - leaves are green because of chlorophyll. Blood is red because of haemoglobin. Those molecules are actually almost the same, except the one in leaves has magnesium in the centre, the one in blood has iron in the centre. A small change like that can make the difference between non-medicine and medicine. The molecule in the jeans is the same as mine, with a slight change, a different metal, to make it do what you want it to do.

PDT is a new treatment?

No, what is new is the drugs we are making. PDT is already available for some cancers, in America, Europe and Russia. It works with light. The drug is introduced into the body and activated with light. The problem is that right now the side effects are very strong. The drug must be introduced into the body and it must go to the cancer tissue. If it goes to healthy tissue, which is the case with the drugs now available, the patient has to stay indoors out of the sun or the healthy tissue also begins to get killed, like chemotherapy.

Your molecules are safer?

This is the whole aim. We are making molecules that are cancer specific – targeted to cancer. Also, with my own drugs, you need very little in order to absorb light. And I have gone much further because I am now combining my drugs with drug delivery, which has never been done before. This is the nanotechnology aspect. The molecules have nanomaterials called quantum dots attached to them that can penetrate very easily any part of the body. They are good at drug delivery and secondly they also give off light, so we can see more easily where the cancer is. So it is just beautiful what we do.

Can this treatment be used for all kinds of cancer?

This treatment cannot replace surgery. The light (to activate the drug) is transported with tubes – we are using laser and fibre optics. If the cancer is spread throughout the body, this cannot work. It’s localized treatment. You have to direct the laser exactly where the cancer is.

How did you come to choose this domain for your research?

It was accidental – that’s the beauty of chemistry. Once you have the interest, you are always thinking: ‘what more can I do with molecules?’ The bottom line for me is that I started working with laser, because I just really love light. I love laser. It’s bright, direct and it has different colours. I started finding different applications for it. That was wonderful for me. My interest was laser, not cancer.

I am afraid it is. Because something that can penetrate and enter any part of the body is dangerous. Secondly, the molecules that we have made so far, the nanoparticles, in the centre of them there are heavy metals. If they leak out, they can attach themselves to your haemoglobin, to other parts of the body and can be dangerous to you. With the help of biologists, we are testing to see how toxic they are and trying to develop those that are least toxic. We do research both on applications and their toxicity.

How long do you think it will take before your drugs are in general use?

There are many variables when it comes to using these drugs on people. One thing which is problematic for oncologists is that lasers are expensive and difficult to maintain. I can do nothing on my own. I am a chemist - we can develop things – but collaboration is what’s important to see if they work. The Centre for Scientific and Industrial Research is doing preclinical testing for me in South Africa. Beyond that, a group in Switzerland has developed a very interesting way to test – using egg embryos. You inject the dye into the veins around the embryo and test its activity

Your research also has environmental applications.

These molecules are really magic. They can do so many different things. The process can be used to purify water that has been polluted, particularly by pesticides. In our countries, people still have to have water from open sources – run-off from the fields ends up in household water, and we have to deal with that. Throughout time, light has been used to purify water. You expect bacteria and so on to be killed by light. But if you put these molecules in the water, that process is made faster. And also the products that are formed are less toxic. If you do it just biologically – just the sun - they can form molecules that are more harmful to the body. We have managed, by using this drug and light, to make molecules that are no longer toxic at all to human beings. This is much closer to success – we have just patented how to do it.

Your goal is to develop a product?

That is my mission. It will come more quickly from the pollution side. Dealing with people has so many rules, it will take much longer. But I would like to do it so that young people can see that, in South Africa, they can take science and develop a product. They cannot imagine this, they believe things come from somewhere else.

Did you imagine when you were younger that chemistry would be your life’s work?

Not in a million years, no. We had no role models. But I was always ambitious – I always thought I could be a doctor or a dentist. And teachers are very important. I met a lecturer when I was in my first year at the University (of Lesotho) He was in the Peace Corps from America. He just made chemistry so much fun. He made me feel that chemistry is the place to be, and then I was hooked. I also had opportunities. The university – I originally come from Lesotho – gave me the opportunity to be trained as an academic. I won a scholarship to train in Canada. I took that opportunity and managed to complete my masters and doctorate. And I am doing the same for others now. I have lecturers from all over Africa – from all over the world, in fact - training with me for their universities.

As the first woman in your department at Rhodes University, you have said you get challenged by doing the “impossible”.

This is the reality – it was very difficult for me to progress with very little support. Many women give up because of this. You’ve got to be a little mad to do what I have done. But what I vowed is that I will help other women as much as I can. Their confidence levels are not as high. I don’t know why, but men are confident even when what they are saying does not make much sense!

As a trailblazer, would you say this is a good time to be a woman scientist in South Africa?

Yes, it’s a good time. I have a lot of girl students. I attract them like bees, even though I’m a little bit tough!

To be honest, I think people don’t take the opportunities that are provided for us. We are in a very lucky country. South Africa is both a first and a third world country. There are very poor people, eating from bins out there, and very rich. The infrastructure is there and the government has made a conscious decision that they are not just going to combat poverty, they will also develop science and technology. People must really take advantage of this and work hard…but apparently hard work is not very popular. Funding is available for us to get equipment, to get more students – I’m applying, I’m grabbing.

Tebello Nyokong is a Professor of Medicinal Chemistry and Nanotechnology at Rhodes University (South Africa) and Director of the Nanotechnology Innovation Centre for Sensors (Mintek). She was one of the five Laureates of the 2009 L’Oréal-UNESCO Awards for Women in Science.