In most people's minds the term desert conjures up an image of undulating sand dunes beneath the hot sun. There are, however, many other kinds of desert. Antarctica, Greenland and the polar ice packs are cold deserts where where the water is locked up in ice. As for the Earth's arid regions, they exist both in areas such as Arabia where the climate is permanently hot, and in others such as the steppes of central Asia where the winters are cold. The common denominator between them is that on average more water evaporates than falls as rain, and life has to adapt to the deficit.

Where there is practically no rain, as in the Sahara and the Gobi, there is virtually no life. The only exceptions to this rule are places where irrigation water can be drawn from rivers (as in Egypt, Iraq and the Indus region, all of which saw the birth of great "hydraulic civilizations"), or from underground "fossil" reserves that can be exploited for a limited time, as is currently happening in Libya. Regions in which enough water falls to allow grazing and perhaps some dry farming are described as semi-arid. There are many of these in Africa, India, Argentina and Australia.

Arid and semi-arid regions make up more than a third of the world's land surface, whereas cultivated land accounts only for one-tenth. They are concentrated in two zones straddling the Tropics of Cancer and Capricorn, on each side of the Equator. The main cause of aridity is to be found in the circulation of the atmosphere above our revolving globe. The almost permanent ridges of high pressure that predominate around the 30°- latitude mark stop rain from forming. Great distance from the oceans or the presence of mountain barriers are other factors that contribute to the aridity of regions like central Asia or the American Midwest.

So deserts have not been created by humankind, as is sometimes claimed, though people do contribute to desertification. In our time increased population pressure and over-intensive agriculture and grazing are accelerating soil degradation and worsening the effects of drought in semi-arid regions such as the African Sahel and north-eastern Brazil.

There is another way in which human activity may affect i the evolution of arid regions. It is thought that the I accumulation in the atmosphere of carbon dioxide from automobile engines, heating or industry and other gases of industrial and agricultural origin can lead to global warming through the "greenhouse effect". It is not yet possible to predict the consequences of such global warming for different regions, but it may well be that in a few decades some arid regions will be drier still while others will be less so. In that case, people will have brought about a significant climatic change, comparable to those that have taken place in the course of geological history.

Discover other articles in our Digital Supplement devoted to deserts and desertification. 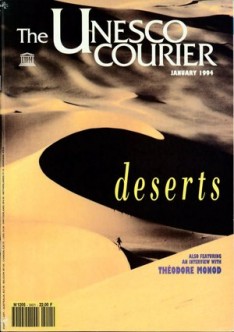