From Franco’s regime in Spain to Hindutva historical revisionism in India by way of South American dictatorships, the dismal memory of the past can contribute to human rights as long as it is revealed and repaired.

To mark the 60th anniversary of the adoption of the Universal Declaration of Human Rights, the UNESCO Courier presents some backward glances that can help us move forward. In our editorial, Pierre Sané, UNESCO Assistant Director-General for Social and Human Sciences, reviews the status of the dignity of the individual in the world today.

All international texts on the protection of human rights are based on the concept of human dignity, as proclaimed in the preamble of the Universal Declaration of Human Rights. Often the concept is understood more through what assaults or opposes it, not what enriches and honours it; undoubtedly this is because of its very particular background, in the aftermath of the Holocaust and Nazi death machine. This strong affirmation of dignity shared by all humankind leads to the first and most famous article of the Declaration: “All human beings are born free and equal in dignity and rights. They are endowed with reason and conscience and should act towards one another in a spirit of brotherhood.”

But equal dignity for all human beings does not generate only rights. In addition, and primarily, it represents a call to action, vigilance and prevention. Recognizing our own dignity makes us answerable to everyone else; there can be no dignity without genuine solidarity and brotherhood.

Sixty years after the adoption of the Declaration, where are we regarding fundamental respect for human dignity and integrity, these cornerstones of human rights? We must recognize that today half the people in the world do not benefit even minimally from due consideration of their identity and their status, despite well-known international advances in domains as basic as the fight against torture, legal sanctions for assaults on women, or the recognition of the rights of refugees and migrants.

The poverty that causes billions of people acute suffering obviously violates the ideals promoted by the Declaration and calls into question Article 28: “Everyone is entitled to a social and international order in which the rights and freedoms set forth in this Declaration can be fully realized.”

Defending the ideals and missions contained in the Universal Declaration of Human Rights requires above all fighting poverty, this tentacular phenomenon. We know its causes, sometimes rooted in the social and cultural reality. The fight must first tackle prejudices, particularly the idea of human dignity as a mere refuge in face of the combined effects of discrimination, exclusion, inequality and injustice. The concept of human dignity goes far beyond that. It is inconceivable without the right to education, decent housing, sanitation. And it rejects resignation and helplessness in the face of situations experienced as inevitable.

A single example to stress once more – the fight against extreme poverty – represents a problem that UNESCO, the NGOs, political decision-makers and civil society must put as first priority on their agenda. Their cooperation is a decisive element in the fight to eradicate poverty and to ensure an international order that guarantee the observance of the rights contained in the Declaration. More than ever it is our duty to ensure the effective implementation of all the human rights in the Declaration. We must concretize this respect for human rights, which means simultaneously respect for the other in his difference and self-respect.

Other issues on human rights 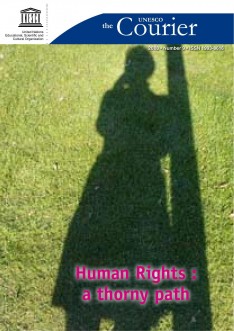