All societies, past and present, seem to have had their feasts and festivals, their high days and holidays when people could abandon themselves to the spirit of the occasion and momentarily forget the trials and tribulations of their daily lives. Today however it is often said that some spark, some element of mystery that enlivened the festivals known to our ancestors seems to be dying out.

The world's festivals form a variegated tapestry in which many different threads are woven: ritual and spontaneity, tradition and licence, the sacred and the profane, rich and poor, individual solitude and collective warmth. They have always been occasions when differences could be reconciled, if only temporarily. At once chaotic and planned, they were times when the usual rhythms were periodically disrupted and the group rediscovered the secret of the origin of the world. The need for order triumphed over disorder.

It is understandable that feasts and festivals should perform such functions in rural societies with a strong sense of community spirit, societies where life is punctuated by the unchanging cycle of the seasons and human lawsreem implacably to reproduce a cosmic design. But how do they fit into life in modern cities where the individual is a lone face in an anonymous crowd, discovers that there is a difference between the laws of nature and the laws of society, and has to assume responsibility for his own destiny that of his community?

While the religious meaning of many traditional festivities is fading, functions with mass appeal such as popular music festivals and sporting events are proliferating, and private conviviality seems to be as widespread as ever.

Festive occasions thus respond to a need which is universal but not easy to define. Do they perform the same function in the modern world as they did in traditional societies? What values are celebrated today by the colourful events which, as the following pages show, are still going strong? 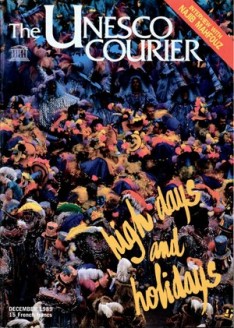