It is the most natural thing in the world to want to simplify things and see them in schematic form, and to break complex phenomena down into their component parts. Surely, before starting to look for order in a chaotic world we should make an effort to set our own minds in order. But though this may be a necessary first step, it can be misleading. If we go no further, if we regard the point of departure as the destination, if we consider as certainties what are at best only approximations, if we mix up the parts with the whole, we adopt a reductionist outlook on the world. And sooner or later a price must be paid.

In politics freedom is one casualty of a reductionist outlook, as twentieth-century totalitarianism has shown on many occasions. Whether it is rightwing or left-wing, religious or secular, rooted in ideology or the expression of an identity, totalitarianism regards one human group a race, a nation, a class, or a religious denomination more favourably than all others and systematically highlights the virtues of the former and the defects of the latter. By so doing, it glorifies the collective destiny of the group and denigrates the individual experience of its members. Those who have such a biased, hémiplégie perception of themselves and of others not only end up by doing harm to others but by mutilating themselves.

What can be seen in the social arena also occurs in all the other spheres in which human intelligence is exercised. Oversimplification is always infertile because it imposes a straitjacket of rigidity on what is constantly changing, because it compartmentalizes what is naturally interlinked, and because it is suspicious of the chaotic, contradictory and random elements that are intrinsic to nature.

This approach leads to a dead end and must be superseded by an effort to move from the simple to the more complex, to turn from the study of simple units and examine the complexities of their interactions. For much of the time, most people manage to ignore the science of complexity and rely instead on plain common sense. Now, however, as Edgar Morin says in this issue, non-specialists cannot afford to leave the privilege of complex thought to scientists. We must learn to fathom the mysteries of complexity because the substance of daily life has itself become so complex.

This is a challenge that life in the late twentieth century compels us to accept. If we refuse to do so we may lose the thread of reality and find ourselves victims of new forms of totalitarianism. 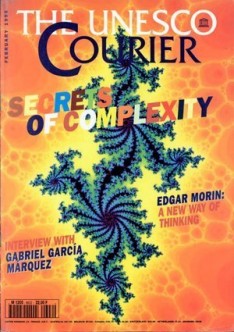