Apartheid: the beginning of the end

Racism has deep roots in human history. It emerges wherever groups of people in situations of conflict defend their freedom and their culture without respecting those of others, set themselves apart, isolate themselves and attack one another in the name of ethnic criteria. It speaks a language of exclusion, which leads naturally to contempt and even hatred.

Institutionalized racism is a variant which is particularly odious because it attempts to justify the business of enslavement in terms of a philosophical and legal terminology which pretends to be "civilized". I am thinking here of the slave trade, which bled Africa so that the cotton fields of the Americas could bloom; and also of Nazism, which brought devastation to Europe for the greater glory of the purported Aryan race.

During the Second World War, racism was unleashed in all its murderous folly. The conflict was brought to an end thanks to the mobihzation of the forces of freedom throughout the world and to a growing realization of the danger this new form of barbarism represented for humanity. The United Nations system was itself an offspring of this new awareness. As the preamble to UNESCO's constitution declares, "the great and terrible war which has now ended was a war made possible by the denial of the democratic principles of the dignity, equality and mutual respect of men, and by the propagation, in their place, ... of the doctrine of the inequality of men and races".

However, this doctrine was soon to reappear in the shape of apartheid. A challenge to the universal values of human rights, it was able to survive for almost half a century with the help of external complicities and reprehensible self-serving. But now the pillars of apartheid are crumbling in their turn, beneath the blows of those who have fought and are fighting for freedom in South Africa, in a world 14 context in which democratic values are finally coming into their own.

For all those who, since the Second World War, have fought unceasingly against racism, this represents a great victory for freedom. It is also a clarion-call to pursue with increased confidence the struggle against insidious new forms of racism that appear in the everyday life of societies in the North and the South ahke whenever people find it impossible to resolve their differences in a spirit of mutual respect.

Only education brings freedom. It alone nourishes the roots of behaviour and shapes attitudes of tolerance and solidarity. Only education in the love of others will one day lead to dialogue between cultures and enable all the people of the Earth to live together in peace. May that day come soon. 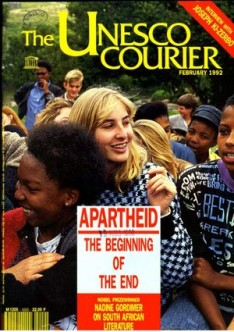