Lasers: 100 million messages on a beam of light

Our modern technology, all aspects of our highly technical civilization, may be poised for a forward surge that is unimaginable in scope. All this is based on the re-stimulation of an old science, the science of light, by a new device, the "optical maser" or "laser". So new is this device that is first prototype was put Into operation less than three years ago.

A laser does this: it produces a narrow beam of light, which is "monochromatic" of a single, sharply defined colour or wave lengthrand "coherent", that is, with all the light waves marching in regular order, like the waves of a smoothly running sea. Light with these characteristics has never before been available to man. Being available now, it opens the way to major developments in com¬ munications, radar, surgery, power transmission without lines, and so on. All the possibilities have not even yet been imagined.

These possibilities are particularly amazing in the field of communications. A single laser-produced light beam has inherently the ability to carry all the information transmitted by all the television stations, radio stations, teletypewriters, and telephone lines in the world, op¬ erating at the same time. Developing the technical means to use this amazing message-carrying ability is a major problem facing scientists; but the first steps have already been taken. Television pictures and voice messages have already been experimentally carried on light beams.

Light for communications will come Just In time. The entire radio spectrum Is already vastly crowded. More¬ over, the demand for additional communications channels will multiply many times during the next decades. 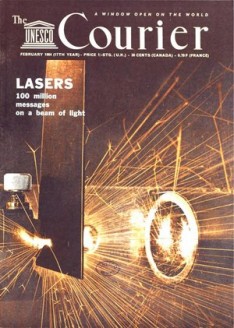