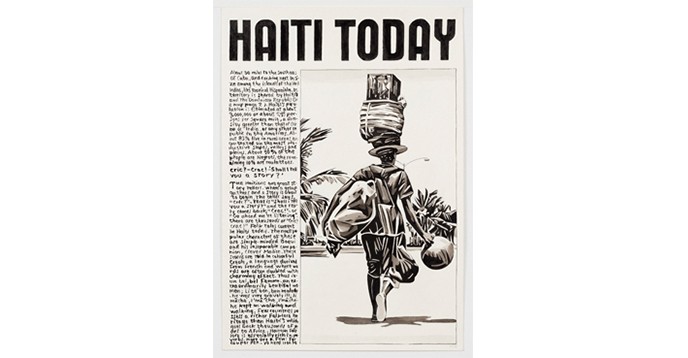 About 50 miles to the southeast of Cuba, and ranking next in size among the islands of the West Indies, lies tropical Hispaniola. Its territory is shared by Haiti and the Dominican Republic (see map page 2). Haiti's population is estimated at about 3,000,000, or about 295 persons per square mile, a density greater than that of China or India, or any other republic in the Americas. About 83 % live in rural areas, noncentrated on the most productive slopes, valleys and plains. About 90 % of the people are Negroes, the remaining 10 % are mulattoes. […]

Haiti is primarily an agricultural country. Because of the mountain-and-plain character of the land and the varying rainfall and water supply, agriculture has developed in fairly distinct zones: coffee is cultivated on the humid mountain slopes ; sugar-cane in all irrigated plains; bananas in the plains and well drained slopes; cotton on the semi-arid plateaus and plains. However, the Haitian farmer is extremely poor, much of the land is worn out and the earth has been "bled to the bone".

Erosion, small-holdings and over-population these are the three main and closely interrelated causes for-the decay of the rural areas. An extreme, but by no means rare case is the Valley of Marbial, in the south of Haiti, where Unesco set up a fundamental education pilot project. In a report on conditions in Marbial, published in 1951, this is what the anthropologist Dr. Alfred Metraux, had to say: "The earth in a land deforested and converted into savanna, has become a brittle substance. Exhausted by two harvests a year and stripped by erosion, the soil of Marbial is dying. With every rainy season, hundreds of tons of humus are swept down by the rivers to the sea. 'That is our life ebbing away', say the peasants as they watch it go."

But since that report was written a change has taken place in Haiti. - In Marbial, the peasant has found that his precious top soil need not be swept down the mountain during the rainy season. He has been shown how to terrace the land; how to alternate rows of food-bearing plants with rows of grass to hold down the earth. To replace the lost trees he has been given seedlings which are cultivated in nurseries and then planted on the denuded hillsides. - The efforts to save the soil and increase its yield which have been made in Marbial are also taking place in other parts of Haiti as part of the five year development plan, stressing agriculture, which was announced by President Magloire in 1951. Technical aid has been given by the U.N. Food and Agriculture Organization.

The most ambitious feature of the plan is the damming of Haiti's biggest (and only main) river, the central Artibonite, and the irrigation of some 80,000 acres that are now dusty desert in the dry season and muddy lakes during the rains. It is planned to distribute the controlled waters of the Artibonite through canals so as to better the lives of 160,000 peasants. The main plan of the Haitian Government also calls for agricultural schools, the co-operative use of tractors, a farmers' bank, reforestation grain storage and the construction of roads to linkfarmers with the markets.

Knowledge to Reshape a Land

Since the declaration of. independence, Haiti has attempted to organize a complete educational system but efforts have been hindered by lack of funds and the shortage of teachers. Illiteracyestimated at 80 to 90 % still casts a gigantic shadow over the peasant masses. Vocational education, so important for training skilled workers, is a relative newcomer in the educational system.

Until recently there was a great difference between urban and rural education. Urban schools, modelled after French education and using imported textbooks, were little adapted to local requirements; rural schools, run by the" Department of Agriculture, have sought to link curriculum to peasant life and problems. UNESCO and other U.N. agencies are helping Haitian authorities in an effort to surmount the formidable obstacle the country faces to eradicate ilhteracy, provide vocational training and improve the economic and social retardation of its rural areas. For the major educational problem in Haiti remains that of the rural school. An agricultural country, depending almost exclusively on its production of coffee, sugar, bananas, cotton, and similar crops for subsistence, Haiti is compelled to try to intensify its agricultural effort through educating the peasants in modern methods of cultivation and soil conservation.

Until the problem of rural education is satisfactorily solved, fa People's Art Reborn Haiti seems destined to remain a desperately poor country. The converse of this statement is also true, for Haitian economics and education are inextricably linked. Progress has been made in recent years but the facts remain that four out of five peasant children never attend school; that teachers' salaries are inadequate; that many school buildings are hopelessly unsatisfactory; that equipment and textbooks are often unobtainable.

Only in recent years has real attention been paid to the provision of schools. The present five-year plan callng for an additional 327 elementary, 12 secondary and 15 professional schools cannot meet the full needs of the people. But to have established this goal and appropriated $ 5,000,000 is a tremendous stride forward in the battle against illiteracy.

Education is compulsory for children of seven to fourteen years but the law is rarely enforced. The reasons: A shortage of schools; the dispersion of rural communities; the crowding of existing schools ; a serious teacher shortage.

Moreover, the language problem continues to plague Haitian educators. The official language of the Republic is French, but all Haitians understand, and most Haitians speak, Creole. Creole is now becoming a written language for the first time, but there are four different spellings and a great lack of textbooks for teaching it.

Another major problem has been the transformation of the teaching methods and subject matter. Today such subjects as health, sanitation and home economics are being given equal emphasis with the three R's. Schools in both urban and rural areas serve as adult centres in the evening. Students may range in age from 12 to 75.

What have these efforts achieved so far? Superficially the results aré not immediately apparent. A closer look reveals striking changes. For the first time, peasants have feelings of pride and dignity as they sign their own names. The toil and austerity of life is slowly alleviated as they learn new techniques of irrigation, soil conservation, planting and economics. As health fundamentals are explained to parents, fewer children die and energy is no longer sapped by disease. The protection of law and the rights of the citizen are made known. Men begin to understand that knowledge gives them power to control their way of life. Mechanization, only possible with a literate population, is within grasp. A new energy ‒ knowledge ‒ is reshaping the face of the land.

During the past decade Haiti has achieved fame by a veritable explosion of artistic talent which has amazed critics from New York to Paris and beyond. The original exponents of this art were simple men. They included a cobbler, a taxi-driver, a voodoo priest, a book-keeper, a carpenter and a tailor, aU of them making a scant living, but with one thing in common. They were able to translate their sorrows, their beliefs, their joys, their patriotic and emotional experiences into pictures of powerful simplicity, utter sincerity and enchantingly decorative effect.

The man responsible for bringing together all this talent, guiding it and revealing it to the world was an American, De Witt Peters. When he founded the Centre d'Art, at Port-auPrince in 1944 this American painter had only a slight interest in the Haiti's contemporary "primitives". Then, following an exhibition in which the works of three of the "popular" painters were shown, he began to follow and encourage their work more closely. From this has grown a powerful movement of popular art in Haiti in which the names of men like Hector Hyppolite, a former voodoo priest, Philome Obin, Louverture Poisson and Wilson Bigaud stand out.

Haiti has produced an interesting body of Uterature, particularly in the field of poetry. Haitian poets have been influenced by French styles, but their rich local colour gives their poetry a distinctively national character. Oustanding poets are Jacques Roumain, Léon Laleau. The MarceUn brothers Pierre and PhiUppe Thoby won fame in 1943 when their peasant novel Canapé-Vert was awarded first prize in a Latin American Novel Contest and was translated into English. 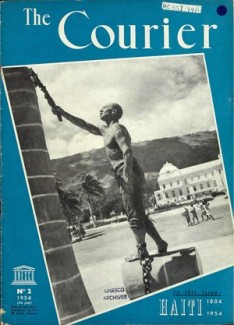