Rabindranath Tagore, philosopher, educator, novelist, poet and painter, is without challenge one of the greatest and most noble figures of modern times. Not only was he awarded the rare honour of the Nobel Prize for Literature, but he also won the distinction far more rare, less spectacular but much more significant, of having his works translated into different languages by writers of equal glory, Nobel Prize winners in their own right, such as André Gide in French and Juan Ramon Jimenez in Spanish.

India today does not celebrate merely the thinker and writer. Above all, India reveres Tagore's generous, universal soul, open to the problems not only of his own land but of the world, the son of the Maharshi Debendranath Tagore, who had been one of the guiding spirits of the Brahma-Samaj. For one of his greatest works, the monumental novel Gora, Rabindranath was to choose as theme the trials and problems of this movement. It is not merely by chance that Unesco, among its many undertakings towards the celebration of Tagore's Centenary, has decided to publish the first French translation of this very novel. For in this book the poet stresses with great fervour and by moving scenes depicted with all his skill as a writer, his zealous devotion to the ideal of a casteless world, a world without cruel, irrational discrimination between one human being and his fellow men. His hero, Gora, cries out: "It is you who are my mother. The imaginary mother whom I long sought during my wandering and vagabonding was sitting at home, waiting before my own room. You have no caste, you make no distinction between men, you know no hatred, you give flesh to nothing but the good that is in all of us. It is you who are India." And then come these words of Gora, which one might well apply to Tagore himself: "No longer is there opposed within me the Hindu, Moslem and Christian. Today all foods are my food." For indeed, Tagore took nourishment from what all the world had to offer, and his message of mutual understanding and tolerance is directed far beyond the boundaries of India, to all cultures and to all men. A message of freedom too, not merely freedom for oneself, but for all: "He who wishes freedom for himself", he affirmed," yet fears freedom for his neighbour, is not worthy of freedom." It is only fitting that the entire globe should unite with India in rendering solemn homage to a man whose glory ennobled ¡ndissolubly both his own country and the world.

Writing days after Tagore's death in August 1941, Jawaharlal Nehru said : "Both Gurudev and Gandhlji took much from the West and from other countries, especially Gurudev. Neither was narrowly national. Their message was for the world." Tagore was in truth a living link between East and West. And so he willed it. His entire life he fought against narrow distrust of foreign cultures. He had faith in the fruitfulness of cultural intercourse and friendship. With this message he was and remains a Guru to Unesco, and it is both fitting and imperative that Unesco's homage to Tagore should join that of the rest of mankind.

Message from the Director-General of Unesco, to the Tagore Centenary celebrations in Bombay in January. 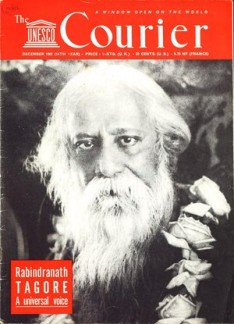