Climate change: where are we going?

On 30 October this year, the European Union Summit in Brussels was unable to reach a decision on who should pay for what to help developing countries cope with climate change. There is a similar risk that the UN Climate Change Conference (COP15) that kicks off in Copenhagen, on 7 December, will come to an a minima agreement that does nothing to guarantee future mastery of greenhouse gas emissions.

Yet no-one, or hardly anyone denies the urgency of taking measures that are both ambitious and mutually agreed upon. So it is difficult to understand why it is so hard to find the consensus to take action, whether it is making drastic cuts in greenhouse gas emissions or helping those who are most vulnerable to adapt to impending changes.

One significant reason is that the ethical terms of the international response to climate change have not clearly been laid down. Agreed, the scientific and ethical issues are complex. And it is true that powerful interests are at stake. But, since the adoption of the Kyoto protocol in 1997, we have been searching for a way for all nations to share the costs of reducing emissions and of adapting to their consequences. Without agreement on the terms and modalities of what is equitable, no solution can be found.

Knowing, but doing nothing – this is the ethical knot at the heart of the matter. It is time that the international community gave itself the means to cut this knot.

In what ways, exactly, does climate change pose an ethical challenge? It seems to me essential to take account of at least four dimensions: climate change invokes responsibiities; it has to be based on scientific evidence; it calls for international solidarity, and it implicates every one of us as individuals.

Climate change is more than just greenhouse gases. It also has a human – and tragic – face. In Papua New Guinea, the Carteret Islands are drowning, its population forced to live in exile and a whole culture destined to die out. Other islands will also soon be submerged, with millions of homeless, condemned to seek shelter and asylum in an increasingly inhospitable world. Then there is the desertification of Africa and the fifty million refugees that it will create in the next ten years, according to some predictions. If the very scale of these figures makesthem seem abstract, let us remember the women of sub-Saharan Africa who have to walk several kilometres each day to fetch water. And the more developed countries are not immune either: Hurricane Katrina, by devastating New Orleans and its coastal region, created a population of climate refugees, within the USA itself.

Finding a way out

Faced with these ever increasing risks, it is our duty to ensure that we are informed, at all levels, so that we can act more wisely, for the benefit of those who have the greatest need. This brings us squarely to the heart of ethics.

What is more, the victims’ faces only express part of the challenge. Human life is just one form of life on Earth, which also includes the animal and vegetable kingdoms. The melting glaciers of the Arctic endanger entire ecosystems. Its not only the polar bear that faces extinction, but an entire marine fauna, which now feeds in polluted waters. And our actions will also affect future generations, who have no say in the matter. Is our epitaph going to read: “It’s your problem, you sort it out”?

An ethical approach to climate change, then, presupposes listening to all voices, taking all interests into account and drafting an agreement that is based on principles that everyone can endorse. We are far from this today.

So, how to get out of the impasse we are in?

UNESCO’s mandate is ethical in its very essence. And the Organization has taken a major step in this direction by initiating, at its General Conference in October 2009, a process that could lead to a universal declaration of ethical principles in relation to climate change. This presupposes an international consensus which may appear impossible. But, on other controversial issues, such as bioethics, UNESCO has demonstrated its ability to give birth to an agreement by consulting all parties.

Discussions between States, while essential, are not sufficient - the people have to be actively involved, too. And difficult subjects have to be tackled frankly, including the inherently ethical responsibilities that result from knowing what is happening and having the ability to act. Without a recognition of this ethical dimension of climate change, there is a danger that all the technical agreements never implemented, all the endless political compromises, will just be foam on a wave that, gradually, will submerge us all.

Alain Pompidou (France), Chairperson, Bureau of COMEST (The World Commission on the Ethics of Scientific Knowledge and Technology). 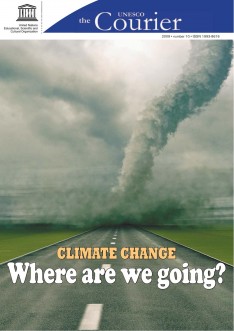