Seven writers in a world of wonders

As the third millennium begins, the notion of world heritage continues to break new ground. Influenced by Western tradition, UNESCO’s World Heritage List long gave pride of place to monuments. Gradually, natural sites have gained their rightful place, along with those described as “mixed” (both cultural and natural). Finally, sites singled out for the exceptional vitality of their traditions are now attracting recognition. In this dossier, seven writers share their vision of a small selection of these global wonders.

This voyage is a personal one:seven writers share their vision of a small selection of wonders chosen from the 630 cultural and natural sites on UNESCO’s World Heritage List.The Senegalese poet Charles Carrère sets forth his approach to heritage, as both an inheritance and a gift to be passed on, a fruit of many meetings and exchanges, an expression of memory and hope (p. 17). As Professor Léon Pressouyre explains (The past is not just made of stone), the criteria for selecting world heritage sites have considerably evolved since the adoption in 1972 of an international convention to protect these treasures of humanity, now spread across 118 countries (pp. 18-19).

Our journey begins with the wanderings of Chinese writer Lu Wenfu in the gardens of Suzhou (pp. 20-22). Serge van Duijnhoven recalls his childhood near the Kinderdijk windmills, forever threatened by the sea (pp. 23-25). Mauritanian writer Moussa Ould Ebnou describes how his country’s 12th and 13th century cities are inexorably being reclaimed by the desert sands (pp. 26-28). Rafael Segovia of Mexico testifies to the unwavering tenacity of Guanajuato, a town that surged from the belly of the mountain in the 15th century with the discovery of silver and gold mines (pp. 29-30). In the Philippines, Alfred A. Yuson admires the rare complicity forged between nature and the indigenous tribes who have patiently sculpted the rice terraces of Luzon Island over the past 2,000 years (pp. 31-33). And finally, Juan Goytisolo brings life to the notion of oral heritage by inviting us to Morocco to hear the legendary storytellers of Jemâa-el-Fna square, in Marrakesh.

The past is not just made of stone by Léon Pressouyre

The soul of Suzhou’s gardens by Lu Wenfu

Irrigating time with the Kinderdijk windmills by Serge van Duijnhoven

The treasures in Mauritania’s dunes by Moussa Ould Ebnou

Guanajuato: fortunes made of silver by Rafael Segovia

Dancing anew on the stairways to heaven by Alfred A. Yuson

UNESCO to the rescue of the halaquis

Learn more about Intangible Heritage in the UNESCO Courier

Preserving the magic by Richard Kurin, in the UNESCO Courier, n° 2001-9 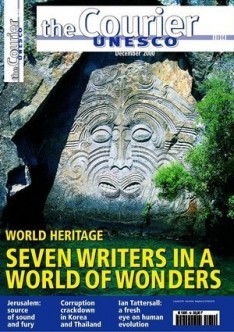