Why should the history of al-Andalus-the eight centuries during which the Iberian peninsula lived under Muslim influence-seem to many people today to be that of a golden age ? Why is it attracting growing interest from modern scholars, one of whom has even gone so far as to talk of it as a " paradise lost ".

The exceptional coexistence of three cultures-Islamic, Christian and Jewish-which was a salient feature of al-Andalus during part of its history occurred within a historical context marked by asperities and outbreaks of violence. From Its beginnings in the eighth century until the fall of Granada, the last bastion of the Muslim presence, in the fifteenth, the history of aI-Andalus was complex and tumultuous.

But It was exceptional all the same. Al-Andalus seems to have been a very special place where groups of people met, talked and worked together, whereas had they lived elsewhere at that time they would have been locked in hatred.

In spite of constant tensions, a mysterious and lasting accord was made between a place, the people who lived there, and the ideal they tried to put into practice-that of tolerance. This is the extraordinary achievement of al-Andalus.

Unique in Its time, this coexistence enriched not only the Iberian peninsula but also the Maghrib and Europe, In ways that are only now beginning to be fully appreciated. Through al-Andalus the foundations of Greek culture, and elements of philosophical and scientific knowledge from India, Persia and China were transmitted to Europe. This Arab Spain linked Orient and Occident, past and future, Antiquity and the Renaissance.

The present issue is an attempt, not to make a definitive statement about a remarkable episode In world history but to show some of its many facets. We have focused largely on one period, that of the caliphate of Cordoba, the brilliant city which was the setting for the golden age of al-Andalus. 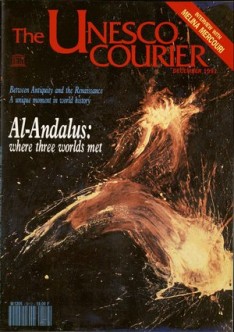