Civilizations of the sea

Just as the latest scientific discoveries tend to confirm that all life originally came from the sea, so some ofthe more startling developments in modern technology seem to suggest that the sea 's resources may be the key to the-future of the Earth.

Between these two observations, between the abyss of the past and the dizzying possibilities of the future, lies the history of humanity, which is inseparable from the story ofthe oceans. How manifold, therefore, are the complexities that beset any attempt to encompass and quantify such a reality, how inexhaustible the prospects of study which it offers! From thousands of possible themes and angles, we have been obliged to select a mere handful to illustrate this issue on Civilizations of the Sea.

Our investigation ofthe marine environmentfocuses on the sea as the cradle of civilizations, the sea as a vector of cultural transmission and exchange, and the sea as an issue facing the world of the twenty-first century. Instead of attempting to present a panoramic picture, a task which would in any case have been impossible, we have endeavoured to heighten our readers' interest in and concern for this fundamental element of life on earth in a coverage which ranges from the invention of the humblest techniques to theflowering of the richest myths, from harsh sufferings endured in history to the routine of everyday life in the modern world, from the Eskimos to the Melanesians. We have not tried to sum up the extent of human knowledge about the oceans but to show some fruits of the impact which they have had on our imagination.

Not surprisingly, this approach has led us to examine some of the "problem areas" of the ocean today: marine pollution, shores and islands, the international law of the sea, the sea as common heritage of mankind.

Some of Unesco's fundamental preoccupations lie in this area in which it is striving to promote scientific research and action in the modern world. 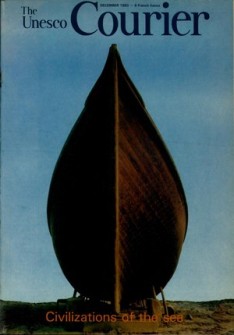