The Changing face of China

In preparing this issue of the Unesco Courier, entirely devoted to Chinese culture, the editors could not pretend to encompass within the limited number of pages at their disposal, still less to analyse, one of the world's oldest civilizations and one of humanity 's richest cultures. There was no question of tracing the path traversed by a society whose origins may perhaps be said to go back to Beijing Man halfa million years ago, nor of following the development of the arts and sciences, which count among their earliest inventions the compass and the seismograph, paper manufacturing and printing, the solar quadrant and gunpowder, and among their discoveries that of the relationship between the circumference and the diameter of a circle, as well as many other brilliant achievements. As far as the ancient history of China is concerned, we evoke in our pages only China's cultural contacts and relations with the West which always began along the trade-routes, in this case the Silk Road and the current which bore westward the arts of Chinese ceramicists. On our central colour pages we also present some of the great landmarks of Chinese art from prehistoric times until the fifteenth cen tury; as well as scenesfrom everyday life in China today.

It was decided to focus the articles on contemporary China, born of the great transformations which came about in the middle of this century after several eventful decades of struggle. These economic, political and social changes have affected every aspect of Chinese society: the traditionalfamily structure; the interpretation of history and what was considered to be the country's philosophy; the conception ofartistic creation and scientific progress. IfNew China still counts a rural population which constitutes 80 per cent of the total, it is on this immense source of human vitality, and on the manual and intellectual workers of the towns and cities, that the country is basing its efforts to construct an original economy which will enable it to go forward successfully with bold scientific and technological programmes for education and development, many of which constitute an example for other regions of the Third World.

The historical conditions which determined these fundamental and definitive changes in the organization of society and in the culture which derivesfrom it, appear in ourpages through the testimony of three of modern China's most famous writers: Lu Xun, Ba Jin and Ding Ling, who were eyewitnesses of and to a degree protagonists in, a period of history whose course they helped to change.

This radical transformation of society was possible because the Chinese people, scorned and oppressed during centuries of feudalism, wereforthefirst time in history taken into consideration. Some of the oldest and most deeply rooted traditions of the Chinese people, such as the martial arts and acupuncture, have thus been respected and encouraged and are today not only practised in China but have won adherents in other Asian countries as well as in Europe and the Americas. Other time-honoured forms of expression discussed in this issue include ceramics and calligraphy, an art which holds a special place in China and for whose uniquely close relationship to poetry andpainting it is difficult to find a parallel elsewhere. Finally we shouldlike to point out to our readers that wherever possible we have followed the Chinese Pinyin transcription of proper names. 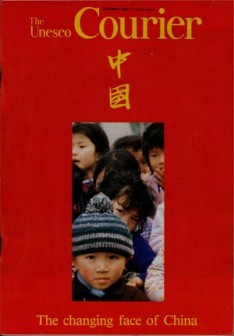