Few men have achieved such renown or have made such an impact on the twentieth century and its art as Pablo Picasso, who was born almost a hundred years ago, on 25 October 1881, at Málaga in southern Spain.

His life was long and prolific. When he died in 1973 at the age of 91 he had produced some 20,000 paintings, engravings, sculptures, drawings, constructions and collages. But he was remarkable not only for the prodigious volume and variety of his output; perhaps no other artist of modern times has responded so intensely and so imaginatively to events, to the changing conditions and challenges of this century.

Although after his early years in Málaga, Madrid and Barcelona Picasso moved to France where he spent three-quarters of his life, he always remained in his habits, his temperament and his outlook fundamentally Spanish (perhaps the greatest genius his country has produced since Goya). And yet his art achieved a universal significance, as an expression of the triumphs and tragedies, the vitality and the restless searchings of twentieth century man. It was nourished by many tributaries from the past, including the work of his great Spanish predecessors and the painters of the late nineteenth century. At the same time, Picasso absorbed many lessons from art outside the classical, European tradition - archaic Iberian art, the art of Black Africa. His vast work reveals not only its creator's sensitivity to wider issues and to purely artistic problems, it also tells much about Picasso the man. It is a compelling personal record of his everyday life, his moods, his rages, and his dilemmas. From beginning to end this man of unflagging creative vitality embodied many paradoxes and contradictions, both in his life and in his art, yet he was never false to himself or to his inspiration. One distinguishing quality of this revolutionary, iconoclastic artist was, for instance, the way in which he constantly returned to tradition, confronting time and again the work of the great painters of the past. Another seeming paradox: while he relished life and loved the human body with an ogrish vitality, his depictions of the body are characterized by brutal distortions of an expressive power unmatched in Western art. Expression is everything! - his work seems to proclaim. For Picasso life and art were one.

This issue of the Unesco Courier is devoted to this inexhaustible, contradictory, astonishing creative genius. 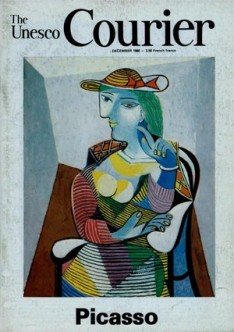