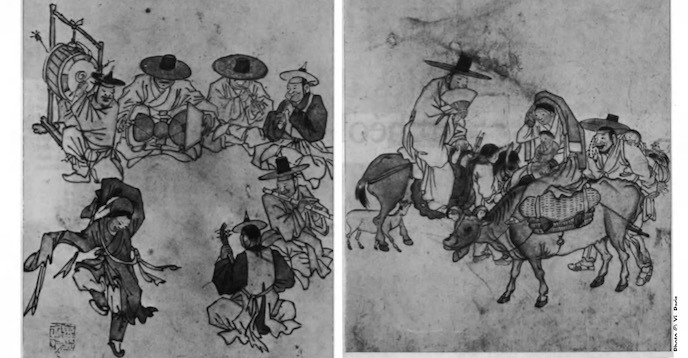 A painting of an old pine tree which Solgo executed looked so real that birds flew into the room to perch on its' branches. Solgo was a Korean painter from the second half of the 6th century.

Down the ages, Korean painting has been strongly influenced by Chinese painting, both because of the geographical proximity of the two countries and the long-standing cultural ties between them. Yet Korean artists were not content with mere imitation. They created a uniquely Korean art by harmonizing Chinese influences with their own native genius.

Korean art goes back to the tomb murals which were a prominent feature of the culture of the ancient kingdom of Koguryo (37 B.C. to 668 A.D.). In its early days, the kingdom was open to the influence of north Asian civilization through its contacts with a number of peripheral tribes, such as the Huns. But the dominant influence was that of the north Chinese culture developed under the Han dynasty (206 B.C. to 220 A.D.) and the Six Dynasties (280 B.C. to 589 A.D.), and the murals of the ancient Koguryo tombs, both in conception and in style, drew their inspiration from Chinese painting of this period.

This tradition had its counterpart in the kingdom of Paekche (18 B.C. to 660 A.D.). The murals in the stone tomb in Nungsanni, Puyo, which depict in a refined and delicate style lotus flower designs, cloud patterns, and portraits of the Four Gods are an excellent example of Paekche art. Another excellent example is the tomb of King Muryong which was discovered in Kongju in 1971. The tomb contains delicate lotus designs and colour representations of the Red Phoenix and animal deities. A beautiful landscape painting executed on a brick wall in a ruined Paekche temple which dates back to the first half of the seventh century confirms the notable development of landscape painting during the Paekche era.

The kingdom of Silla (57 B.C. to 668 A.D.) was by far the most conservative of the three ancient kingdoms as far as painting was concerned. Up to 1950 no trace of Silla painting had been found, but excavations in recent years have turned up some exciting findings, notably the birch bark paintings discovered in Tomb 155 in Kyongju in 1973. A form of oil painting, it would seem that the contours were first drawn rather freely on the surface of articles made from white birch bark and that the colours were then added.

The Samguk Sagi (Historical Records of the Three Kingdoms) has an interesting anecdote about a painter named Solgo who was active from the middle of the sixth century to the beginning of the seventh century. "A painting of an old pine tree which Solgo executed looked so real that birds flew into the room to perch on its' branches. After the passage of time the colours in the painting began to fade and it was retouched by an old priest. From then on, the birds were no longer deceived." So, even though no actual Silla paintings k are extant, with the exception of those associated with tombs, one can see that, by contemporary judgement at least, works of outstanding artistic merit were being produced.

There were two schools of painters during the period of the Koryo dynasty (918 A.D. to 1392 A.D.), one comprising professional painters and the other made up of aristocrats, scholars and literati who regarded painting as a hobby.

Yi Nyong was one of the representative professional landscape painters of the Koryo era. Two of his landscapes, one depicting the Yesong River and the other depicting the Chonsuwon Pavilion, won great praise from Emperor Huitsung of Sung China who was himself an accomplished artist.

Outstanding among the literati painters of the day were Chong Chi-sang, famous for his landscapes and paintings of flowers, Haeae and Hyeho, both Buddhist monks, who gained renown for their Buddhist paintings and their bamboo paintings in Indian ink, and King Kongmin (1351-1374) who excelled in landscape painting, paintings of flowers and birds, and portraits.

The division of the painting world into two schools mentioned earlier was intensified under the Yi dynasty (1392-1910). The professional painters centered their activities around the Tohwa-so (Office of Painting), a government office which had been set up in the Koryo era but was reorganized under the Yi dynasty.

The leading professional landscape painters during the early Yi dynasty were An Kyon and Yi Sang-jwa, and the outstanding literati landscapist was Kang Huían. All three painted in the style of the old Sung academy, showing the conservative taste of the royal court and the nobility. A factor in this trend towards conservatism was the enormous collection of Sung and Yuan paintings which Prince Anp'yong, the fourth son of King Sejong, had in his possession. Prince Anp'yong was a young man of refined taste and artistic leanings.

Around the middle of the sixteenth century a group of painters, notably Kim Che, Yi Pul-hae, and Yi Kyong-yun introduced the Northern School style of painting to the Korean art world. The Northern School continued to exert its influence until the end of the seventeenth century, numbering among its adherents artists of the calibre of Yi Chong (1578-1607) and Yun Tu-so (1668-?)

The eighteenth century saw the emergence of a number of remarkable painters. Among them was Chong Son, a landscape artist, who introduced the Southern School and thus boldly challenged the conventional Northern School style. Chong Son was the first artist to successfully adapt the Southern School style to paintings of Korean scenes and this innovation may be attributed to the awakening of a new national consciousness, which ultimately led to the emergence of the Sirhak school of practical learning, a popular literature written in Han'gul, and genre painting based on themes taken from the daily lives of the people.

Director of the National Museum of Korea, Seoul, Ch'oe Sun-u is one of the contributing authors of the book Korea, its Land, People and Culture of all Ages, Seoul, 1963. 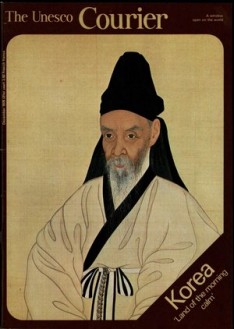