Three years ago, on 10 December 1948, the General Assembly of the United Nations adopted the first Universal Declaration of Human Rights in the history of the world. The anniversary of this historic event will certainly be celebrated with even more mark than in previous years. Not only on this day, however, but on all days. Unesco's campaign makes itself felt through books, the press. the radio, the film, exhibitions, and teaching in schools, for the purpose of disseminating the Declaration as widely as possible and making its scope and meaning known throughout the world. This year, one of the major themes has been the denunciation of racial prejudice, based on a thorough and critical study of the facts.

By seeking thus mobilize the opinion of to the world, Unesco shows that it is faithfully carrying out its obligations. With all its resources, and an increased effectiveness due to the dynamic concentration of its activities, our Organization is joining in the work of the United Nations to establish Human Rights in men's minds, as in their everyday lives.

The objectives aimed at by the Declaration are at the very centre of the mission which our Constitution has assigned to us. The world which we are trying to build through education, science and culture perceives its features in this bold outline of a community of free men, men enabled to perform in full their services to humanity. But I would like to rapid survey of the rights with which Unesco is more espcially concerned and, in so doing, to underline the increasingly universal nature of our work. In making it universal we are, surely, practising enlightened realism, for it is by giving all human beings a worthier and fairer share in life that we shall bring about that true peace lor which the world yearns - peace based on solidarity between the peoples.

In that vast column of humanity which is on the march in search of knowledge, can we reconcile ourselves to seeing the advance guard taking giant strides while half the world lags behind in a cloud of ignorance and is thus condemned to a miserable existence? This initial inequality, with all the dangers it implies, points to our most urgent duty, which is to give these masses of the people minimum of technical and civic knowledge wherewith to secure their emancipation. This as I have said more than once, is the purpose of the international enterprise in fundamental education which Unesco has launched this year, on largest scale that its limited resources permit, bearing in mind that it may later receive help which will enable it to make the project more consonant with the immense needs it has to meet. The establishment of a centre for Latin America has opened the way to the creation, without further delay, of a world network of schools where, within the space of a few years, training will be imparted to thousands of teachers who will then be called upon, in their turn, to train future leaders in their own countries.

The extension of free and compulsory primary education to all children of the world still encounters too many obstacles arising from the unequal distribution of wealth between the peoples. Here, too, international co-operation must intervene decisively. The XIVth Conference on Public Education, which met this year at Geneva under the joint consonant with the immense needs it has to meet. The estab has invited governments to draw up national plans for a steady increase in school attendance, and it goes without saying that such plans will receive our full support.

For its part, the Inter-American Cultural Council has already decided, at its inaugural meeting recently held in Mexico, in which Unesco took part to undertake a literacy and fundamental education campaign, of which it regards the universal extension of primary education as an indispensable prolongation, and it has provided for the support of this campaign a whole series of economic, civic, and trade union measures. Thus the battle against ignorance is to be waged on all front. with ever-increasing forces.

In the field of science and culture, Unesco's many activities are directed towards the double aim of increasing the world's inheritance of creations of the mind and sharing it out between all human beings. Research becomes a service to humanity when we so facilitate and guide if that it is brought to bear upon problems of world interest, like the development of the the Arid Zone, or the tensions created by the rapid introduction of modern technical processes into countries of ancient culture.

It is important to safeguard the eeqom and rights of creative artists, and we hope that our patient work in this direction will soon be crowned by the adopotion of a Universal Copyright Convention. But we should be failing in our duty if we did not try to open the horizon of a liberating culture to the ever increasing multitudes. To spread among the public at large a knowledge of the scientific discoveries that are changing the face of the world, to equip libraries and museums so that they shall become centres of intellectual and artistic initiation, to disseminate reproductions of masterpieces of painting throughout the world, to help musicians and spread a knowledge of their work - such tasks as these, upon which we are now engaged, illustrate what is the keynote of our programme.

This is the place to mention the planning of the future Covenant of Human Rights. It would be of outstanding significance if this legal instrument were to cover, not only civic and political freedom, but the rights to education and a share in cultural life and the benefits of scientific advancement. States ratifying the Covenant would be undertaking clear obligations, and the difficult process oi applying these rights, which Unesco has already begun but with inadequate resources, would thereby be immensely facilitate. It is our hope that the provisions dealing with these rights, which in accordance with our suggestions were accepted by the Human Rights Commission at its recent meeting, will figure in the draft Covenant when this appears upon the final agenda of the United Nations General Assembly.

The implementation of Human Rights is inseparable from access to information, which has become so essential in modem life in connexion with the spreading of knowledge and with effective freedom of expression. But information can only be spread freely and universally if all sections of humanity have the necessary material resources at their command. This emphasizes the whole gravity of the newsprint shortage which is today hampering the production of newspapers and books, and imparts urgency to the appeal launched by Unesco for immediate international action to increase the production of newsprint and distribute what exists more equitably between the various countries.

This is a threat of reaction which must be dispelled before it is possible to envisage fresh progress. In a distracted world which is apt to let its energies be diverted from work in the service of peace and humanity. circumstances all too often compel us, in many fields, to mark time. But our faith is not shaken. History will, in the end, vindicate men of goodwill, provided they persevere in their efforts and never lose that thirst for justice and magnanimity, which is another way of saying that they never lose their power to believe, dare and achieve. 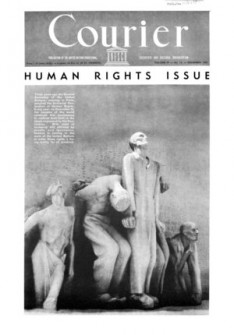