The Challenge of democracy

Montevideo in 1990, Prague in 1991, and Tunis in 1992three capitals on three different continents have served as the venues for meetings marking three successive stages in the debate on democracy in the present-day world on which UNESCO has embarked. This geographical diversity is not fortuitous, since democracy is no longer the historical privilege of any one continent. To quote the celebrated phrase which Jean-Paul Sartre used long ago to describe Marxism, democracy has become the ""boundless horizon" of our time. Hopes for renewal are increasingly being vested in democracy, not only in Latin America and Eastern Europe, but also and this is not stressed often enough outside the orbit of European culture, in Africa and Asia. With waning nationalistic fervour and the fading of socialist mirages, individuals in the South are aspiring to a form of citizenship that protects them both from the pressures of the community and from state oppression.

In societies where individuals are required to perform many duties, they are now intent on enjoying rights, discharging responsibilities and availing themselves of the freedom to think, to speak, and to choose and dismiss their leaders.

But as the ideal of freedom spreads to the entire planet, it is meeting hitherto unknown obstacles and raising new questions. It arouses different expectations in different places. Some define it in essentially negative terms as the end of dictatorship. For others, it satisfies a hunger for individual emancipation and is synonymous with a democratic system whose contours have yet to be traced in today's fast-changing political, economic and cultural landscape. For yet others, it is coming to mean the establishment of a specific set of legal and political institutions.

Democracy can only exist in places where people are free to choose those who rule them. It is also vital that its ground-rules should be respected by all concerned and that no-one should be able to use universal suffrage to gain power and then deprive others of access to power. In other words, democracy must be rooted in a set of values, rules and priorities which are broadly shared and allow acceptable compromises to be made between divergent interests.

In a context in which crucial economic and technological choices are being made at the world level and no longer by nations and regions acting individually the fate of democracy in any country is bound to be influenced by international developments. The economic balances and social solidarity that are the prerequisites for building democracy in individual countries are becoming increasingly imperative on a global scale. In other words, the fate of freedom can now be said to depend, to some degree, on each and every one of us. 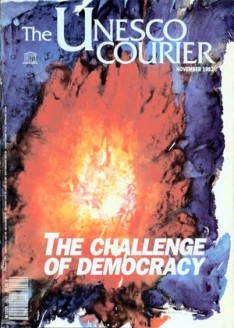