What better way into the heart of a country could there be than the streets of its towns and cities? Here time-worn labyrinthine alleyways...there busy modern thoroughfaresstreets endow cities with their personality, in some cases balanced and harmonious, in others overwhelming.

In many parts of the world the urban environment is changing rapidly through pressures of industrialization, the influx of newcomers from rural areas, and the incursions of the automobile. Old streets are being torn apart and the memories of the past enshrined in them are fading. And yet the life of a city is rooted in its streets and neighbourhoods. Without this fabric etched with so many traces of the past, what would cities look like and what sort of places would they be?

Many city-dwellers today are organizing themselves to defend their cities against the threat of dehumanization, and the widespread creation of neighbourhood defence committees has been a striking urban phenomenon of recent years. What can be done to encourage urban populations to identify more closely with their environment and to defend it more effectively?

One answer to this question may be found in a UNESCO-supported project entitled "Memories in a Street" in which seventy cities throughout the world took part three years ago. The project, which originated in an idea put forward by Robert Delpire, director of France's National Photography Centre, was organized by the International Association of Art (IAA) and France's National Academy of Street Arts. It began in Paris with displays in ten Metro stations which presented a pictorial history of the French capital. Cities taking part in the operation were invited to select centuryold photos of their historic streets and display them on the spot where they had been taken so many years before. "Memories in a Street" evoked a wide response as citizens ransacked their family archives in search of old documents and photos, while their children combed avenues and alleyways photographing historic features that caught their eye.

In Paris, Tokyo, Abidjan, Baghdad, Colombo and other great cities people thus got together to celebrate the life of their streets, past and present. For them perhaps the rediscovery of the street was a first step towards making their city a more human place to live in. 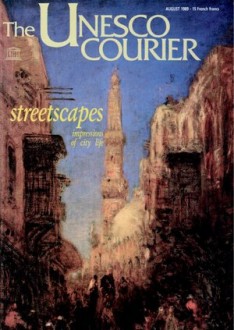