Nature and culture: the human heritage

This special issue of the Unesco Courier presents the first fifty-seven entries on the World Heritage List of cultural and natural "properties" recognized by the international community as of outstanding universal value.

The list has been drawn up by an international committee on the basis of proposals submitted by the States (fifty-three so far) which are party to a major international agreement, the Convention concerning the Protection of the World Cultural and Natural Heritage, which was adopted by the General Conference of Unesco in 1972. The Convention, which came into force in December 1975, has been welcomed all over the world as a new departure in international co-operation. It sets up a system whereby the international community can participate actively in protecting those parts of the cultural and natural heritage which have great universal value.

Traditionally, the preservation of the cultural heritage and the conservation of nature have been regarded as two quite different problems, with responsibility for the protection of important cultural or natural sites being considered to lie exclusively with the country in which they are located. Where the Convention breaks new ground is in linking together the protection of the cultural heritage and the natural heritage and in providing a permanent framework legal, administrative and financialfor international co-operation in this protection. It also introduces the specific notion of a "world heritage" whose importance transcends all political or geographical boundaries. In addition to the World Heritage List, the committee is also establishing a "List of World Heritage in Danger", featuring property for the protection of which major operations are necessary. 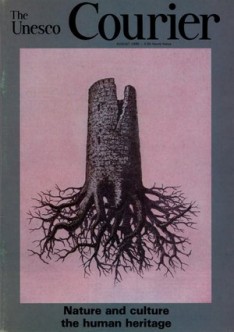