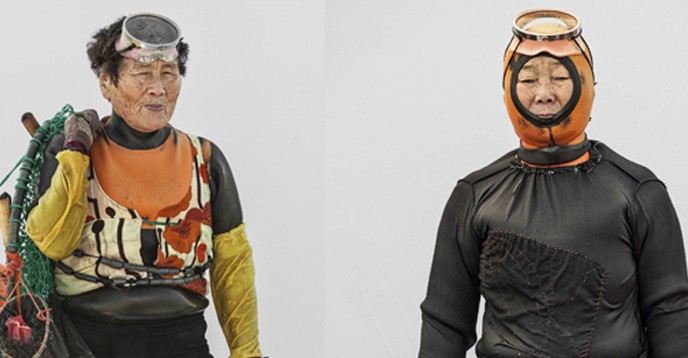 The photographs are amazing. Women divers over sixty, wearing old-fashioned diving suits stare at the camera lens. These rare images do not fail to raise questions: “Her face looks like she’s going to breathe fast at any moment […]. The person is a haenyeo,” explains Hyung-sun Kim, not without emotion. He has long observed “the water drops [falling] from the surface of her [the sea women’s] diving suit, which is greasy like the skin of marine animals”.

This South-Korean photographer has been to Jeju Island — located just off the southern shores of the Republic of Korea — on several occasions between 2012 and 2014 to photograph the haenyeo. These women dive as deep as ten metres underwater without oxygen tanks to fish for seafood. This particular form of diving is called muljil. In the daily lives of haenyeo, the term refers to seven hours of free-diving per day, ninety  days a year, all year round.

The photographer chose to take these women out of their context by presenting them in front of a white canvas. Their pictures were taken as they emerged from the water after the muljil. “There is no ocean, [which] is their workplace, [or] shoreline where seafood is scattered from their net bags. There is just a haenyeo,” explains Kim. Free of any disruptive visual elements, the spectator is able to concentrate on the faces and bodies in the photographs which, according to the photographer, are authentic “illustrated guides to haenyeo”. These photographic guides testify to the difficult living conditions of these women who are  seen as symbols of  Jeju Island.

This  extraordinary phenomenon -- which emerged in a Confucian society centred on men -- the culture of Jeju-haenyeo was inscribed on the UNESCO List of Intangible Cultural Heritage in 2016. Its inscription contributes to improving the status of women in the community and to ecology, with its environmentally-friendly methods. The community, organized into fishing cooperatives, prohibits the use of modern technologies to avoid overfishing.

While they were once drawn to the sea because of the island’s arid volcanic soil which was unfit for large-scale agriculture, the women are now turning towards other sectors, such as the booming tourism industry.. Only 4,500 women of  Jeju Island’s 600,000 inhabitants still practice underwater fishing. There are 2,500 divers who are still truly active and the vast majority of these are over the age of sixty, according to the New Yorker. Since the 1970s, the work of the haenyeo is no longer an imperative; it has now become a conscious choice.

With the intention of preserving this rich heritage, local authorities have put in place a series of measures, the most appreciated of which are free medical coverage since 2002 and the free distribution of diving suits.

“The sea’s water surface is a border between life and death. Haenyeo frequently cross over this boundary,” commented art critic Park Young-taik. Surprisingly, the haenyeo, who are as modest as they are intrepid, do not seem to be aware of the “importance of their contribution to the lives of their families and the local economy,” explains Lee Sun-hwa, a member of the Jeju Special Self-Governing Province Council, to the Korea Times newspaper. Through their inscription to the list of intangible cultural heritage, international recognition will undoubtedly restore the self-esteem and confidence of the haenyeo.

Learn more on Intagible Heritage in Republic of Korea, in the UNESCO Courier