Information: a game of hide and seek

Journalists can help change the world. As proof, Mexican reporter Lydia Cacho Ribeiro (45) whose courage impressed the members of the jury of the 2008 UNESCO/ Guillermo Cano World Press Freedom Prize. In an exclusive interview granted to our colleague Lucia Iglesias on the day the Prize was announced, the laureate explains how she has contributed to the evolution of legislation with respect to child pornography in her country and the abolition of legal detention of journalists following accusations for slander and libel.

But it is precisely because they detain real power that journalists have many enemies, some of whom don’t hesitate having them killed to silence them. Although international laws obligate States to punish these crimes, justice is often powerless. Yet when a journalist is killed we are all victims, explains Toby Mendel, Director of “ARTICLE 19”, an International Human Rights Organization that protects freedom of expression throughout the world.

To illustrate the tragedy of these murders, our Lebanese colleague Bassam Mansour portrays his famous compatriot Gébran Tuéni, assassinated in Decembre 2005. For 17 years this Director of the “AnNahar” newspaper published a supplement devoted to the young generation he saw as a “daily mirror of an entire generation no-one has paid an attentive ear to, either in the past or in the present.” His silence weighs down on their future.

The American journalist Susan Moeller also addresses the young. She believes that the fight for the diversity of expressions starts with the education of students. Teaching them how to account for events and problems of the present is not enough. Director of the International Center for Media & the PublicAgenda, she explains that the young also have to be made aware of the importance of a free and objective press.

But how can a free and objective press be guaranteed, if journalists themselves don’t have access to the information that interests them and often have to rely on rumours to write their articles? «With the exception of South Africa, Angola and Uganda, Africa has been lagging behind in the global movement towards the adoption of Freedom of Information Laws which should guarantee journalists the access to information held by public authorities,» explains Togolese journalist Gabriel Baglo, Director of the Africa Bureau of the International Federation of Journalists.

Paul Taylor adds: “For a long time they refused to give us the lists [that] show that particularly in the United Kingdom, the royal family and the big aristocrats are among the main beneficiaries of European agricultural subsidies.” Who is “they”? The European Commission claims it’s the Member States.

It took journalists – otherwise flooded with information - ten years of campaigning to access certain files considered sensitive by Brussels’ European Institutions, explains this journalist at Reuters. Access to information for all, but first of all for those whose job it is to make it public – this is what the journalists and experts, who have contributed to this issue devoted to World Press Freedom Day celebrated on 3 May in Maputo, are asking for.

Besides the award of the World Press Freedom Prize to Lydia Cacho Ribeiro, UNESCO has organized on this occasion an international conference entitled “Freedom of Expression, Access to Information and the Empowerment of People” in the capital of Mozambique.

Towards the end of the month, UNESCO will also celebrate World Day for Cultural Diversity for Dialogue and Development. To mark this day, the Courier is publishing an article entitled “Koyo, a place for dialogue between two cultures.” For almost eight years, a French poet and six Malian painters have created, in a small village, works that belong neither to Western nor to Dogon culture, neither to poetry nor to painting….They open a new space for dialogue and creation.

Finally, the Courier tells the sad and funny adventure of a rebel genius, the Croatian Marin Držić, considered one of the major playwrights of the Renaissance. He was born 500 years ago, in Dubrovnik, a jewel on the Dalmatian coast, now on the World Heritage List. He died in May 1567, in Venice, without having succeeded in convincing Cosme de Medici to overturn the Senate of his birth place, “this 20-headed monster tyrannizing the people.”

Discover this issue. Dowload the PDF. 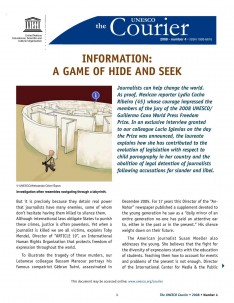