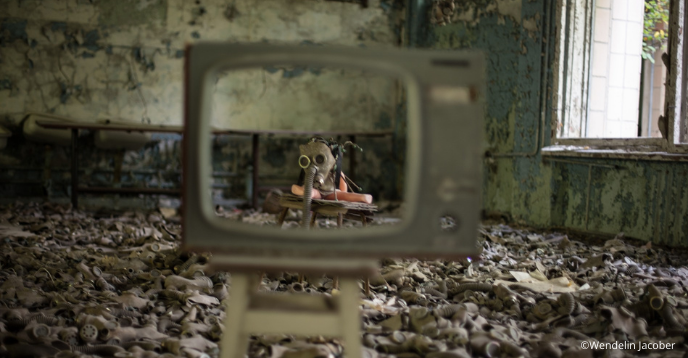 A radioactive mask left on the remnants of Chernobyl, seen through an empty television frame.

In the aftermath of the explosion of reactor no. 4 at the Chernobyl (Ukraine) nuclear power plant on 26 April 1986, more than 4 million people living in Belarus, Ukraine and Russia were exposed to radiation. “The Chernobyl disaster is now recognized as having been the greatest technological catastrophe in human history,” writes Belarusian geneticist V. K. Savchenko in his recently published study The Ecology of the Chernobyl Catastrophe.

More than 1.7 million persons are estimated to have been exposed to higher than normal levels of radiation; 850,000 of them still live in the contaminated areas, and 280,000 should be relocated but have nowhere to go. For ten days on end burning graphite in the reactor spewed radioactive gas and aerosol particles into the atmosphere. Nearly 50 million curies¹ in all, or 77 kilograms of various radioactive substances (the most lethal being iodine-131, caesium-134 and -137, strontium-90 and plutonium-239) were cast over extensive distances (from 300 to 400 kilometres), while lighter air-borne particles drifted to countries as far away as the United States, India and Kuweit.

The full impact of the ecological disaster can be measured by studying the half-life² of iodine-131 (8 days), caesium-134 (8 days), strontium-90 (28 days), caesium-137 (30 days) and plutonium-239 (24,100 years!). The half-life of a substance has to be multiplied by an average of 10 or 15 to understand how long it will take for radioactive substances to disappear entirely from the environment.

Despite its short half-life, iodine-131 is the most harmful element for the moment. The human organism needs iodine, but unfortunately it does not distinguish between the stable element and the radioactive one. Merely inhaled or lodged in the food chain, it settles in the thyroid gland where it can cause cancer. Children and babies are especially vulnerable.

Because of their high solubility, caesium-137 and strontium-90 are the principal culprits in contaminated soil and plants, which they enter via the root-system. Concentrated in the food chain, they settle in the muscles (caesium-137) and on bone surfaces (strontium-90). Strontium-90 replaces calcium in the bone marrow, thereby opening the door to blood diseases such as anaemia and leukemia.

Plutonium is, however, the most dangerous element by far (the intake of a single microgram is lethal to human beings). The heaviest of the elements released by chernobyl, it is not easily absorbed by plants and is radioactive only over a short distance. Its fallout was minimal and affected the immediate vicinity of the power station, an area thereby condemned to several tens of thousands of years of dangerous sterility.

The disaster's ecological effects―apart from the harm done to human life―are still largely unknown. Grassy plains and fields and flat, bare ground are the kinds of terrain that are most seriously contaminated. Some 144,000 hectares of agricultural land and 492,000 hectares of forest have been withdrawn from normal use over a long period. Radionuclides concentrated in the sediment at the bottom of standing water (lakes, swamps, reservoirs and the like), are absorbed by animal and plant life. In the forest radioactivity concentrates in tree bark, moss, lichen and mushrooms and in leaves and pine needles, which contaminate the soil when they fall to the ground. In some areas it is forbidden to gather firewood. When burned, the wood contaminates ovens, and its ash used as fertilizer contaminates soil and crops.

A lot of pastureland is unusable. Forage from the wet plains, which is extremely contaminated, can only be used as a last resort. Dairy products must not be consumed before being specially processed. Around Chernobyl, milk is used as an indicator of the contamination level; when milk is acceptable for consumption, other products from the same farm can also be consumed.

In response to the thousand and one questions asked by the stricken populations, Belarus has produced a 55-page booklet entitled Radiation: How to survive in the Radiation Contaminated Areas. Potatoes and grain crops are the food crops least prone to contamination. AMong fruit and berries red and black currants are more liable to contamination than apples and pears. The booklet strongly urges people who grow their own produce to use mineral (phosphorus and potassium) and organic (manure, guano and humus) fertilizers in their gardens and orchards because these seem to prevent the plants from absorbing radionuclides.

The booklet gives a lot of down-to-earth advice on the best methods for washing, cooking and preserving food. Salting and marinating meat, for example, is one of the best ways to rid of caesium-137, which stays in the brine. Generally speaking, poultry and cattle may be consumed if they have been penned in and fed only uncontaminated (imported) food for a month or a month and a half before being slaughtered. Meat and animal byproducts must undergo a radiological test. A network of labs and monitoring centres has been developed for his purpose.

It is strongly recommended to keep houses dust-free, to leave working clothes outdoors, to wash often with soap, not to wash clothes in rainwater, to wear face-masks for certain activities, to drink plenty of diuretic and laxative infusions and eat food rich in protein, vitamins and mineral salts in order to strengthen the body’s defences. It takes several months for the human body to eliminate caesium.

Obeying this advice is unfortunately not possible for the 400,00 displaced persons who are now penniless and jobless in a region they do not know. They are tortured by the fear that they are harbouring some terrible disease caused by radiation. Is their pessimism justified? Are they right to fear the worst?

To help Chernobyl victims cope with psychological and social disorders triggered by the disaster, since 1991 UNESCO has opened nine community centres for children and adults in the resettlement areas near the stricken region. A World Health Organization (WHO) Conference on the health consequences of Chernobyl, held in November 1995, noted that the increase in psychological problems has been accompanied by a marked rise n thyroid cancer in children under fifteen in Belarus (a thirty-fold rise since 1986), and in Ukraine, where the numbers of such cases have increased at least ten-fold.

Scientists believe that the rates of leukemia and other blood ailments, as well as breast cancer, bladder cancer and kidney diseases could also increase over the next few years. Studies carried out in Japan ten years after the atomic bombing of Hiroshima and Nagasaki showed a sharp rise in the incidents of these diseases. Although preliminary reports on the state of health of the workers (some 600,000 “liquidators”) brought to Chernobyl in the first weeks after the accident show no increase in death-rates, they d reveal a big jump in the incidence of common ailments, a high rate of neuropsychological disorders and premature aging.

The psycho-social effects experienced by the affecter populations were singled out for priority at the WHO conference. “In particular,” noted Dr. Hiroshi Nakajima, Director-General of WHO, “these have included anxiety over the possible effects of radiation on their health in the long term. Originally, much fear and mistrust had occurred because of the lack of information immediately after the accident, which caused many psychosomatic disorders.” Headaches, chest pains, intestinal disorders, sleep disturbance, loss of concentration, and alcohol abuse are commonplace. Similar psycho-social effects can be observed in the wake of earthquakes, fires, floods and other natural and man-made disasters.

According to psychologist Lubow Horich, coordinator of the nine rehabilitation centres, “People… continue to be suspicious of most information available.” Fact-gathering in the nuclear field is hard; tempers flare quickly; fact and fiction intertwine. Some people believe, for example, that radioactive contamination is contagious; others believe that red wine and vodka neutralize radiation!

Chernobyl is the eight nuclear accident of which glaciologists have found undeniable traces in glaciers. Glaciers have also recorded all the atmospheric nuclear tests carried out by the major powers between 1954 and 1963. Snow and ice imprison all radioactive elements carried by air currents. Moreover, it is impossible to confuse natural and artificial radionuclides. Radioactives fallout acts as a reference level for glaciologists, enabling the different layers of snow to be accurately dated. This means that it is futile to try to hide or minimize the facts: nuclear safety goes far beyond mere national boundaries.

²Half-life: the time required for a decrease by half in the activity of a radioactive body.

Chernobyl: beofre and after, The UNESCO Courier, September 1990 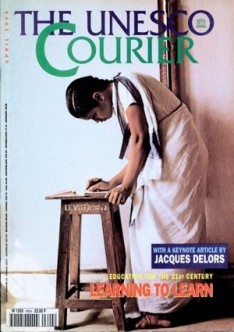