Travelling is one of the oldest and most important of human activities. The reasons for the traveller's quest have been many and varied, ranging from early man's search for new hunting grounds to modern man's attempts to conquer space. Impelled by commercial, religious or political motives, travellers have crossed the face of the earth in search of territory. Through initiatory journeys they have sought communication with the invisible world.

This issue of The UNESCO Courier does not pretend to be a catalogue of all forms of travel, past and present. It focuses instead on the ways in which travel can reveal people and cultures to each other. To show travellers discovering other peoples and other worlds the Editors have compiled an anthology of extracts from travel literature written in many different ages and places. Through anecdotes and reflections chosen to represent the widest possible geographical and cultural spectrum, we see travellers noting the similarities and differences between themselves and those they "discover", in some cases feeling the impact of profound cultural antagonisms. We see them recognizing, often in unexpected forms, the common bond of human experience. We see a slowly emerging realization of the extent of human diversity.

To comply with this general criterion we decided to exclude from the anthology "objective" descriptions of climate, landscape, plant and animal life, customs and forms of political organization, the kind of scientific observations which are made in the course of anthropological and ethnological studies.

The extracts have been grouped in a number of sections. Clearly, many more passages could have been chosen from the rich harvest of world travel writing, but if such great names as Marco Polo, Louis-Antoine de Bougainville and Alexander Kinglake are missing from our anthology, it is because we have sought to use the limited space at our disposal to present travellers such as Olaudah Equiano and Jan Myrdal, who are perhaps less well known to an international public, and above all to show that the appetite for travel has taken man to every point of the compass.

Our goal has been to bring together writing which reveals the images, sometimes distorted, which men create of each other when they meet. 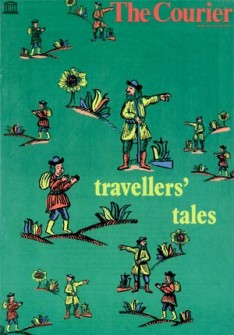