Today, twelve hundred million human beings are living under the constant threat of malaria. It Is not a spectacular disease. Its victims show no wounds or mutilations to excite our pity ; it comes upon them as they sleep, In the stillness of the night, carried by a silent attacker, the mosquito. It is the "'fever" long believed to be inescapable in tropical countries, more of a nuisance than an illness people said. The truth is that malaria is a disaster!

World Health Day this year is devoted to the world's most costly disease, malaria, and the world campaign for its eradication.

Never before in history have the nations concerted their efforts on such a scale against a single disease. Without a dissenting voice the ninety Members of the World Health Organization have resolved to pool their knowledge and resources to achieve nothing less than the complete elimination of this disease from our globe. This year's World Health Day will, I hope, serve to recall to all peoples the urgency of this great undertaking.

Malaria remains in 1960 a constant threat to more than 1,000 million human- beings. For the most part these are people who already have more than their share of sickness and poverty, and can least afford to be further weakened in their struggle against misfortune. 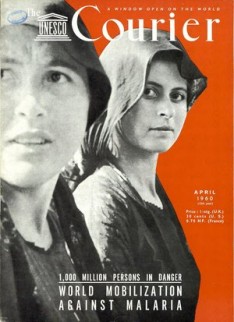