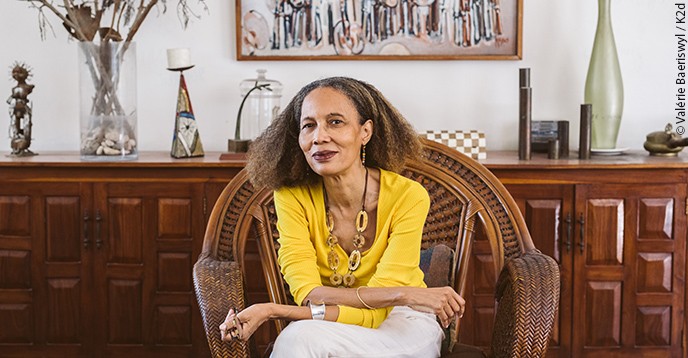 A leading figure on the Haitian literary scene, Yanick Lahens discusses her work. Inspired by the popular and vibrant culture of her country, it is a far cry from the usual miserable clichés that abound. Through her singular and poetic stories, she also recounts the history of the world’s first Black Republic, which is both “a product of modernity and a response to this modernity”.

How does one decide to choose this very particular way of living that is the world of writing?

Like the Haitian poet Georges Castera, I believe that “words choose us because we are alone”. Words become a way of communicating with our own mystery, our intimate knowledge, and of communicating with those who, by reading us, explore their own mystery and the intimate knowledge that is theirs. Writing involves accepting solitude, and, at the same time paradoxically, trying to escape it.

To be a writer is to feel the need to make sense of reality, to put it into perspective in order to fill a fundamental void with words, as others might do through music, or through drawing and colours.

Could you describe the place where you write?

There are many places in the house that I write in – I often carry pieces of paper in my pockets – but my favourite place is my bedroom. On my desk, I have a fetish object, a pebble on which a fish and seaweed are drawn on an ochre background. I think it sums up life well – mineral, fauna and flora all at once. It’s the human hand that has made it an objet d’art.

Port-au-Prince is the central character in your book Douces déroutes [Gentle diversions]. It is also at the heart of Failles [Faults], which was written in the aftermath of the earthquake that struck the Haitian capital in January 2010. How do the city and the country inform your work?

I am a daughter of this city. In my very first collection of short stories, Tante Résia et les dieux [Aunt Résia and the Spirits and Other Stories], there is a story called “La Ville” [The City], which describes the long journey of a character trying to catch a woman wearing a red dress. This wandering is a pretext for evoking the history of this city – its myths, its powerful, disconcerting, and lively present. From there, I reflect on myself – I question history, myths, geography, the life force, the world as it is, with its inequalities, its misfortunes and its beauty, against all odds.

What role have women played in the literature of Haiti?

I think their role has become much more obvious since the late 1980s. This is thanks to the work of feminist groups that have highlighted the historical and political role of women in  Haiti. This has enabled us to revisit our literary heritage – especially the work of the novelist and playwright Marie Chauvet, who truly introduced the modern novel to Haiti with her trilogy Amour, Colère et Folie [Love, Anger, Madness: A Haitian Triptych]. Since then, two generations of female writers have emerged. It is interesting to note that they also write in Creole.

As the first person to hold the Francophone Worlds Chair at the Collège de France in Paris, you called the course you gave there in 2019 “Urgence(s) d'écrire, rêve(s) d'habiter” [Urgency to write, dream(s) of living]. What is the urgency that you referred to?

We were born in Haiti during an emergency that has never left us. The Haitian revolution [1791-1804], the third revolution in modern times after the United States and France, pushed the Enlightenment project further with its radicalism. It is anti-colonial, anti-racist and anti-slavery. We are the mould and the matrix of the North-South relations established by this modernity.

If our elites tried to reproduce the model of the old metropolis, an anti-plantation culture developed in parallel – with a religion, voodoo; a language, Creole; but also a way of occupying space, matrimonial relations, etc. The first writers who came from the elite, wrote in French to say that we exist as Blacks and as human beings. For over a century, an oral literature has been developed in Creole, and is now appearing in the written word. We are leaning on these two pillars of support.

Today, we are still in this state of emergency because, as far as I am aware, North-South relations have not fundamentally changed. Also, the complicity of the elites in maintaining these relations is still just as obvious for countries in the South. Writers, and artists in general, have created against a backdrop of distress and anger, but with the will to write “in a state of poetry”. As the Haitian poet René Depestre says: “The state of poetry is flourishing, light years away from the states of siege and alarm”.

In your essay, L’Exil: entre l’ancrage et la fuite [Exile: between anchorage and flight], you show that Haitian literature is marked by a paradoxical movement between a longing to be elsewhere and a desire to stay. How does this oscillation manifest itself?

It has always existed. First, we are all transplanted people. Next, many people have worked hard to make this country uninhabitable. And finally, in the imagination of the ex-colonized, there is this idea – that must always be resisted – that the best can only be found elsewhere, in the North. The combination of these three factors has created this oscillation between anchoring and flight.

The Haitian revolution made the country the world’s first Black Republic. How does it continue to question modernity?

We are both a product of this modernity, and a response to it. We are a recent civilization born from the mixing and meeting of the Atlantic and the Caribbean seas. We question  modernity because we see its contradictions and limitations. From the very beginning, our existence has been a way of rethinking the universality of the Enlightenment.

What does Haitian literature have to say today?

Migration is one of the major destinies of countries in the South, whose lands have been rendered uninhabitable. Many Haitians have therefore migrated since the beginning of the twentieth century – taking with them this culture, which was formed in the nineteenth century, and of which literature is one form of artistic expression among others.

These literatures are a prefiguration of the multiple world that is emerging, and of the multilingualism that Édouard Glissant evokes in Le Discours antillais [Caribbean discourse].

A major figure in Haitian literature today, Yanick Lahens was born in Port-au-Prince, where she returned after attending school and university in France. Author of essays, short stories and novels, she has won many awards, including the prestigious Prix Fémina in 2014, for Bain de lune (Moonbath). Lahens’ work has been translated into English, Portuguese, Japanese and Italian. She previously taught literature at the university in Port-au-Prince, and worked for France’s Ministry of Culture. She is also involved in numerous projects dedicated to the fight against illiteracy in her country, and a project addressing the issue of slavery through art and literature.