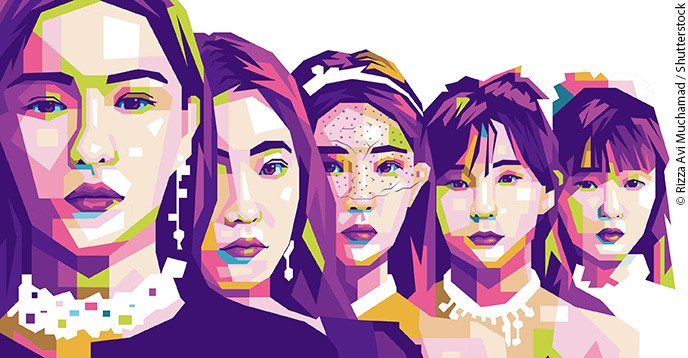 While large parts of the cultural sector have come to a grinding halt due to the pandemic, K-pop – the South Korean music genre that’s become a global phenomenon – has continued to flourish.

‘Dynamite’, the first song from K-pop band BTS to be sung entirely in English, was such a big hit when it was released in August 2020, that it was estimated to have contributed over $1.4 billion to the economy of the Republic of Korea, the Ministry of Culture, Sports and Tourism estimated.

The feel-good music video from the hugely popular boy band smashed all previous YouTube records – with a total of 101.1 million views in a single day, twenty-four hours after its release.

K-pop, arguably the country’s most successful cultural export, has not suffered due to the pandemic. Quite the contrary. The genre’s influence, which can be measured by the popularity of its online concerts, has grown steadily in recent months. For instance, KCON:TACT 2020, a week-long online concert in June 2020, attracted over four million viewers.

Nearly forty per cent of those who attended these virtual events said they would purchase tickets again, the Korea Creative Content Agency found. Seeing the potential of the economic contribution of online K-pop concerts, the government announced that they would allocate 29 billion South Korean won to build a studio – to encourage entertainment companies to organize more of these events.

Deprived of outings and activities, the country's young people are over-invested in their screens, which have now become the only way to access culture and information.

In a survey by consulting agency 20s Lab on the media consumption of Generation Z, 88.4 per cent of respondents indicated that their media usage had increased during the pandemic. YouTube, streamers, and television programmes were among the most common types of content that these young South Koreans watched.

In one of the world’s most-connected countries – with an internet penetration rate of over ninety-five per cent in 2018 – it is no surprise that nearly eighty-seven per cent of young people between 20 and 29 are hyper-connected and addicted to social media, according to a 2019 study by Statista, a global business data platform.

Nearly a quarter of young people surveyed in a 20s Lab study in October 2020 were  categorized as “heavy users” – they were on social media for over three hours a day. The study also revealed that each platform was used for a different purpose: Instagram, for  updates from friends and expanding personal interests; Facebook, for finding useful information or sharing interesting content, and Twitter, for expressing feelings or thoughts throughout the day.

Minjeong Kang, a professor at the College of Fine Arts, Hongik University, Seoul, says Gen Z “want to be connected all the time, and express their convictions” on social media.

Another distinctive feature is that today’s younger viewers prefer short videos that focus on reality – as opposed to older generations who enjoy longer, mainly fictional, content. In her research, Kang found that over eighty per cent of the country’s Gen Z population used YouTube as their main source of information.

Coping with the Coronavirus blues

K-pop has even had a beneficial effect on the psychological state of young people. Many say that these frothy videos have helped them cope with the Coronavirus blues – a term that describes the anxiety caused by the pandemic.

In response to the popularity of music programmes and short formats, the industry has adapted. Content related to K-pop has helped channels such as Dingo Music on YouTube to amass over 2.7 million subscribers. Launched in 2015, the channel targets the 18 to 24 generation, and features the country’s most trending idols and artists – including singer-songwriters Hyuna, Taemin, and Chung Ha.

Before using YouTube as its main platform, the company started on Facebook, and specialized in one-minute “snack videos” – bite-sized pieces of content with fast-paced editing. This format catered to the short attention spans of young people, explains Jay Yeon, a former producer for Dingo Music. He attributes part of the company’s success to its fast adaptation to trending social media platforms.

K-pop has also given a boost to paid music streaming sites such as Melon, the country’s most popular music streaming app among youth, followed by YouTube Premium, according to Statista. People in this age group streamed an average of 137 minutes of music a day, 20s Lab noted.

Capitalizing on the popularity of this music among the younger generation, new social networks have emerged – such as Clubhouse, an invite-only social network based on audio-chat – where members from all over the world can talk in real time.

Driven by the huge success of K-pop groups, these new trends in cultural consumption did not originate during the health crisis, but the pandemic has amplified and accentuated them. And we can only imagine that they are here to stay.