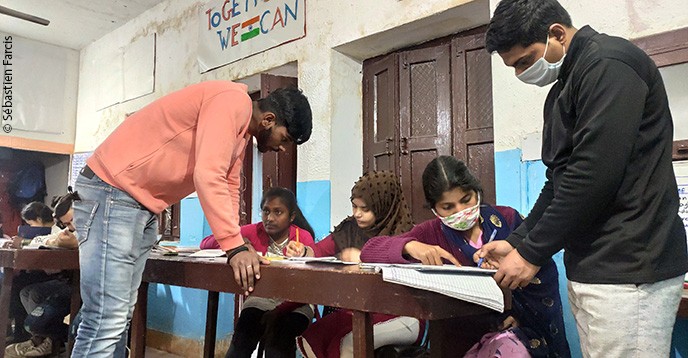 Shabri (seated, with a mask), finishes her training at the Life Project 4 Youth Alliance centre in New Delhi, after an interruption of more than nine months due to the lockdown.

Soaring unemployment, distance learning in conditions that are often difficult, feelings of isolation, a return to domestic work for girls from disadvantaged backgrounds. In a country where almost half the population is under 25, young people are paying a disproportionately heavy price during the health crisis.

The year 2020 had started well for Gaurav – in February, he was hired as a salesman in a sports shop in the Pul Bangash area of Old Delhi. It was the first job for this 20-year-old amateur boxer who had left school early.

But the coronavirus epidemic brought all this to a brutal end. “Public transport became less frequent, and then stopped completely,” Gaurav recalls. “I couldn’t afford to take a taxi to work every day, so I had to quit.” In any case, he would not have been able to keep his job because of the strict lockdown imposed from 25 March that year. This paralysed the Indian economy for over six months, and shattered the dreams of many young people.

India has one of the youngest populations in the world. Over 600 million people, or almost one Indian in two, are under 25. And, like Gaurav, many are now finding it hard to enter the labour market. According to projections based on the latest census in 2011, 11.5 per cent of the Indian population, or 157.7 million people, are between 18 and 23. This inexperienced workforce is most at risk in the event of an economic downturn.

Urban youth on the front line

The crisis caused by the pandemic is the most serious ever recorded since the country's independence in 1947. India's gross domestic product (GDP) fell by 8.5 per cent in the 2020-2021 fiscal year. According to a three-year survey of 170,000 households by the Centre for Monitoring Indian Economy, 41.2 per cent of those surveyed had lost their jobs between December 2019 and April 2020.

This figure rises to 58.5 per cent for young people aged 15 to 24. “Urban youth have been much more affected than rural youth,” says Paaritosh Nath, a research fellow at the Centre for Sustainable Employment, Azim Premji University, in Bangalore. “The agricultural sector has continued to function, and the guaranteed public employment programme in rural areas has made it possible to offer work to more people there. But such a programme does not exist in the cities, except in a few states.”

The lockdown has also delayed the path to economic independence for young Indian women, like Shabri, a high-school graduate from a New Delhi slum. In December 2019, she began vocational training with the Life Project 4 Youth Alliance (LP4Y), which trains youth aged 17 to 24. She had a difficult time when she returned home to her family during the lockdown. “We went to my grandparents' house in rural Bihar [a state in the country’s east], where I had to do all the household chores,” says the 24-year-old, squinting over a face mask. “I was scared, because that's not what I wanted to do with my life.” But the ordeal has only increased her motivation. While her father was slowly resuming his business as a tea vendor, Shabri returned to her studies.

The LP4Y NGO has become a lifeline for those affected by the pandemic. But before it could resume its activities after the lockdown, its volunteer staff had to restore their premises, which had been devastated by the monsoon. “In September, when we were allowed to reopen, all the balconies outside our offices were covered in mud,” says Romain Butticker, manager of the Paharganj centre, which is spread over three cramped floors of a building in this working-class district of Old Delhi.

After considerable efforts to contact the participants, around thirty trainees found their way back to the centre in December. “The epidemic has been a disaster for these young people. They come from the slums, where six or seven people sometimes share a single room,” Butticker says.  “Before the lockdown, they were studying, and had a future to look forward to. And then, all of a sudden, everything stopped.” They came back worn-out, but also very eager to make it through.

Students have also borne the full force of this crisis. For the quarter of young Indians who attend  university, classes became virtual during lockdown. While the transition to distance learning has gone fairly smoothly for students at private colleges, it has been more difficult for those attending public universities, and for students who are less fortunate or live outside major urban centres. “All our courses were delivered by voicemail on WhatsApp,” says Munazza, who was completing a master's degree in English at the Jamia Millia Islamia Public University in New Delhi, at the time. “It was the only way that students who had returned to their homes in Kashmir [a northern Indian state] could continue their studies.”

The pandemic has also increased social inequalities, and caused millions of students to interrupt their studies. In the Mysore region in the country’s south, for example, forty-three per cent of students in public universities were no longer following their bachelor’s degree courses in December 2020. The drop-out rate for girls has been as high as sixty-five per cent. “Hit by the crisis, many parents have preferred to marry off their daughters,” explains sociologist and feminist writer and activist Manjima Bhattacharjya.

Students who have managed to continue their studies often suffer from a sense of isolation. When Munazza's roommates left during lockdown, the 24-year-old found herself alone in New Delhi. “After they left, I found it hard to keep studying. Even cooking was an effort,” she recalls. Her hopes of finding a skilled and well-paid job have also receded. “I was offered three hours of work a day for less than what a taxi driver earns,” she complained. “Why study for an extra five years if that is the case?”

Munazza managed to bounce back, by joining the students who helped feed the thousands of migrant workers from rural areas who had lost their jobs in the city, and could not return to the countryside because of a lack of transport.

Finally graduating in June 2020, Munazza now plans to enrol her thesis for further studies. But universities that are still in lockdown, or have inadequate staff, could take months to release the registration forms. The year of crisis has not just been negative for her. It has helped her become more mature and get to know herself better, she admits. “I'm a person who worries by nature. I now  realize that I have to learn to stay calm. If I am calm, everything will be okay.”

UNESCO warns of a generational catastrophe

The pandemic: Mirroring our fragilities, The UNESCO Courier, July-September 2020

The school under a bridge in New Delhi, The UNESCO Courier, October-December 2019