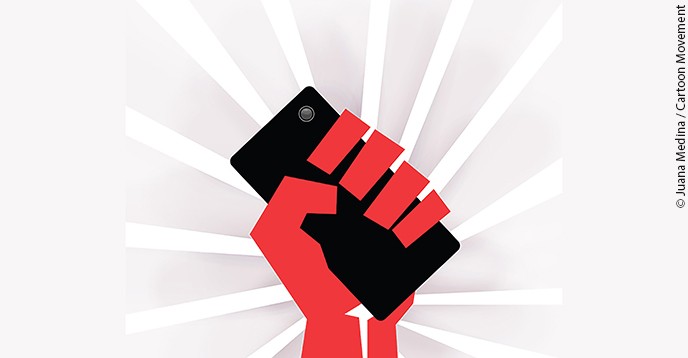 Hopping from one social network to another, young people in the Middle East and North Africa (MENA) region now get their information from YouTube, Instagram and Facebook. To be able to distinguish between reliable information and fake news while navigating this flood of information, it is urgent to develop critical thinking.

Hadil Abuhmaid
A doctoral candidate at the School of Journalism and Communication, University of Oregon, United States, she is co-author of How The Middle East Used Social Media in 2020, an annual review.

Some days ago, my nephew asked me who my favourite YouTuber was. Without hesitation, I said “no one”, because I rarely watch YouTube. He gasped and asked, “Then what do you do on your laptop all day?”

Well, I am a 34-year-old Ph.D. student, not an 11-year-old. But his reaction reflects the power and influence that platforms like YouTube have on many young people around the world – including the Middle East, the region where I am from and which I continue to study.

In one of the most youthful regions in  the world – where over twenty-eight per cent of the population is between 15 and 29 – it should come as no surprise that nine out ten young adults use at least one social media platform to converse, access information, and share content,  according to the 2019 Arab Youth Survey.

“I check my Facebook and Instagram about fifty times a day,” Tabarek Raad, 28, a translator  from Basra, Iraq, said. “I use these two social media accounts to connect with friends and keep myself in the loop of what’s going on in the world,” she added.

Using social media platforms to check the latest news, watch and interact with friends’ stories, share something, or just passively browse through the newsfeed, is universal among youth everywhere today. But what is interesting about internet users in the Middle East is that they have an average of 8.4 social media accounts, according to GlobalWebIndex (GWI), the market research firm.

Mohammed Haraba, 28, who works for a large oil company in Al-Ahsa, Saudi Arabia, has nine social media accounts – including WhatsApp, Snapchat, Instagram, and Facebook. “I check WhatsApp every hour, unless I am too busy. It is the only platform on which family and friends gather. I don’t know anyone who doesn’t have an account,” he said.

Facebook, which used to be Haraba’s main platform for socializing four years ago, now ranks low on his list. With over seven out of ten Arabs using Facebook and WhatsApp, the platform still has a big presence in the region, with 45 million Facebook users only in Egypt, Statista reports.

Social media platforms are now the dominant source of news for young Arabs. Statistics from the Arab Youth Survey show that in 2020, seventy-nine per cent of young Arabs receive their news from social media, compared to only twenty-five per cent in 2015. “Facebook is one of my main sources of news and communication with friends. I check it more than ten times a day,” Pamella Hadawar, 24, from Palestine said. “And depending where the news comes from, I check with other news agencies and sources to make sure it is accurate.”

This trend has resulted in a decline in news consumption through newspapers and television. Saudi Arabian youth, for example, reported an almost thirty per cent decline in TV news watching in the past four years.

The widespread use of social media in the region is both fascinating and scary – with information bombarding us constantly, it has become harder to filter the content. Fake news and misinformation have become especially prevalent during the pandemic. False and inaccurate news has spread even more rapidly on social media, resulting in an infodemic.

The deluge of information has been overwhelming for some. “I used to get most of my news from Twitter, but I deactivated my account when the pandemic started,” says Tala Zabalawi, 31, a digital marketing specialist in Amman, Jordan. “It was so stressful to read about the pandemic, that I decided to focus on happy thoughts instead.”

The growth of media consumption and the increasing affordability of new technologies point to an even further expansion in the use of social media in the MENA region. Big tech companies have been quick to take advantage of this emerging market. This has initiated an important discussion around media literacy.

Realizing the value of media education for young adults, several organizations in the region have been offering training and workshops to increase awareness. Other initiatives – like Jordan’s Fatabayyano platform in Arabic – offer fact-checking services.

This is a start. In order to develop critical thinking that allows us to distinguish between truth and lies, between facts and opinions, we need the widespread introduction of media education, particularly in schools.