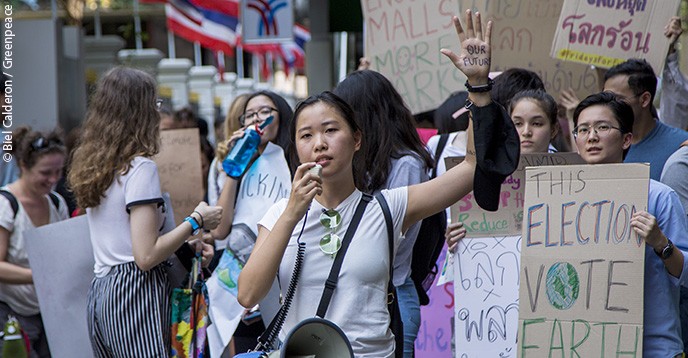 A Fridays for Future school strike for climate in Bangkok, Thailand, 15 March 2019.

For the new generation, changing the world means saving the planet, above all. They are proclaiming this loud and clear – on social networks, in the streets or through civic disobedience movements, such as school strikes. The scale of the worldwide  mobilization of under-25s is commensurate with the urgency of the environmental challenges we face.

Since she first sat down in front of the Swedish parliament in August 2018 and went on strike from school to raise awareness about the climate crisis, Greta Thunberg has galvanized millions of followers around the globe. Today, the youth climate movement is considered by many to be a loud and unified voice – which has found a tremendous resonance around the world among Generation Z, born after 1995.

Fifteen-year-old Holly Gillibrand has been striking from her school in Fort William, Scotland, every Friday since January 2019. “It’s all about rebellion – this sort of civil disobedience will change everything. We need more people, adults and children, demanding change and rebelling against the system that’s caused this crisis,” explains Gillibrand, who volunteers for the global climate movement Fridays for Future, started by Thunberg.

“We’re all working together for a common goal, to create a different future, and that brings me hope, but it’s frustrating when adults tell me what I’m doing is great – then don’t actually do anything about it themselves.”

While youth activists play a key role in amplifying the call for a step change, Gillibrand knows there isn’t time to wait for the youth of today to become the leaders of tomorrow. “It’s important that young people understand they can change something right now – we can be a powerful influence on parents who vote, or connect with other people concerned about the same things,” she insists.

For Gillibrand and many others, the fight against climate change is a collective experience. Global strikes give individuals a sense of agency, and a feeling that they’re part of something much bigger than themselves. This leads to connection, and ultimately more potential for change, according to professional climate coach Charly Cox.

Based in Oxford, she helps people to transition into greener careers. “Isolation is a massive threat to any activism, and young people tend to congregate en masse at school or university, so they can share their vulnerabilities and work together,” says Cox who feels that the whole system is moving towards a new paradigm, and that there’s a sense of readiness for change. “As parents and young people, we have a very defined stake in the future, and the pandemic  has given us a massive imaginative capacity that we didn’t have previously, to consider new possibilities. Now, I think the activist voices are chiming with the shift in beliefs in the general system.”

So many solutions start with a fundamental need for better understanding of the crisis, something that is lacking in many schools around the world. In the United Kingdom, the student-led Teach the Future campaign is calling for an urgent overhaul of the education system to better reflect the climate emergency and ecological crisis – from improved and climate-relevant teacher training, to more energy-efficient school buildings, and a curriculum that covers the crisis and vocational courses that offer training in green skills.

Sowing a sense of confidence

While writing his book, Eddie Reynolds, co-author of Climate Crisis for Beginners (Usborne, 2021), made a conscious effort to provide children – and their adults – with the tools they need without telling them they have to do anything. “People underestimate kids’ ability to understand the concepts and deal with it emotionally. We just tried to make every aspect of climate more tangible – from economics to politics – by explaining that they are the result of lots of different peoples’ individual choices. Everyone’s small actions are really significant,” says Reynolds, who hopes books like his will spark new conversations about climate.

Sarah Goody, a 16-year-old student who lives in San Francisco, United States, says she “found her purpose” after learning briefly about the climate emergency in school. She started striking and researched the subject in more depth, then went on to found Climate NOW, an organization that aims to educate and empower young people. She has presented talks to classes in over seventy schools so far.

“We provide schoolchildren with tools and resources but it’s also about sowing a sense of confidence, so that young people feel like their voices do matter – because my generation is the one that will face the worst effects of climate change,” Goody explains.

Now, Goody is optimistic that she and her peers will succeed as change-makers. “Gen Z is the compassionate generation, looking to change the world,” she says. “The future is exciting – we can restructure our society to reflect the ideals we have for a better planet. So many innovations can come out of this movement.”

At the international level, Climate Cardinals is a youth-led non-profit platform that makes environmental information more accessible to everyone through translation. “The climate- crisis clock is ticking, but any motivated bilingual student can start making critical information accessible during this climate crisis,” says volunteer Cristina C. Leon, 17, a student based in Lima, Peru, who speaks Spanish, English, and German. She understands that language is a huge barrier to the global transfer of scientific knowledge.

Since launching in spring 2020, more than 8,000 young volunteers like Leon have translated climate information into over 100 languages, from Hebrew to Urdu. “Our translations directly empower the most vulnerable communities to prioritize the climate agenda. It’s a matter of leaving no one behind, regardless of their language or education,” she adds.

Being bold and creative

It’s not all about the science either. Climate will increasingly become a huge part of our culture – allowing communities to create a safe space to explore and deal with the raw emotions associated with the crisis. Serayna Solanki, a 25-year-old climate justice advocate based in the UK, is curating a creative intergenerational programme called Grandmothers’ Garden for ethnic minorities, focusing on climate change, nature, and environmental loss. “Art is a powerful tool for stories, and takes many shapes in different global communities. From traditional songs and tapestries, to creative writing and design, it´s a vehicle for emotions, guiding wisdom and complexity,” describes Solanki.

“Youth activism is so powerful because there is no verbal camouflage or vagueness when speaking to systems of power. Stop ecocide. We say it how it is because we understand what's at stake. Climate change is a result of colonial capitalism,” Solanki states. In her opinion, the mobilization of Gen Z has far from peaked. “While youth activists have been raising awareness of climate change, I believe that the next push will be raising awareness of false and unsustainable solutions. With the confidence to be bold and creative, there's still a lot of energy to come.”

Rebels with a cause, The UNESCO Courier, July-September 2011

Prescriptions for a sick planet, The UNESCO Courier, July-September 2011