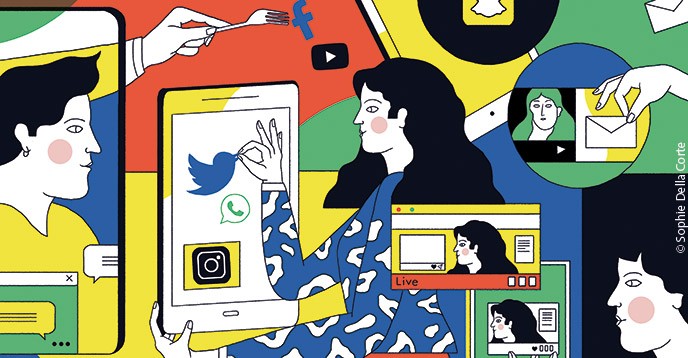 In the space of two decades, young people have moved away from traditional media – television, radio, print – to digital media. But beyond the change of format, it is their whole relationship to information that has changed. Latin America is a good example of this move towards a more social, interactive and responsive web.

Elìas Haig, 15, dreams of being a science popularizer. To learn about the subjects that interest him, this teenager from Los Teques on the outskirts of Caracas, began by consulting the platforms he found on the internet. He also regularly consults Twitter. “It allows me to have a more comprehensive view of what's going on,” he explains.

In 2018, at the age of 12, Haig created a blog, La Noción de la procrastinación (The concept of procrastination), where he talks about video games, science, social networks, films, and even fake news. He has now decided to focus on his blog and his Twitter account, another social network where he already has over 4,400 followers. To establish more direct contact with his audience, he has also started creating a podcast on YouTube.

In his quest for information, Haig is fairly representative of his generation – hyper-connected, favouring social networks to the detriment of traditional media, and a transmitter of information on his favourite topics.

Young people have gradually appropriated media to the point of converting them into laboratories for the construction of identities and the social world, according to Jorge Alberto Hidalgo Toledo, president of AMIC, Asociación Mexicana de Investigadores de la Comunicación (Mexican Association of Communication Researchers). They are now both consumers and producers of content, he explains.

Although young people continue to consume political, social and economic issues in the media, they generally use this information as a mechanism to answer the existential questions that concern them, adds Hidalgo Toledo, who is also academic co-ordinator of the School of Communication at the Anáhuac University in Mexico.

“There are many, many ways of being young,” he continues. “We generally imagine youth as a  unitary, uniform group, a mass. But some of them have a strong political awareness, which comes mainly from the fact that they are concerned about a fundamental issue: the future. And they can visualize this future from a political, economic, family or work perspective.”

Will my family be okay? What will the world be like when I finish my studies? These are some of the questions that young people ask themselves in socio-digital spaces, according to the expert.

But this interest in political or economic issues in young people comes much after their interest in sports and entertainment – as shown in a 2020 study by the Instituto de Investigaciones de la Comunicación (Institute for Research in Communication) of the Central University of Venezuela (ININCO-UCV).

Another study by ININCO indicates that young people focus on information concerning their daily lives – such as urban public transport services, or the exchange rate of the dollar. “Information is increasingly about content of practical interest. For young people, this paradigm shift has led to a diversification of sources, or a replacement of traditional media in favour of emerging media – where even a meme can now serve as a source of information – such as a Twitter feed or a podcast,” explains Morella Alvarado, a faculty member at ININCO-UCV.

Faced with these changes in the habits of the new generations, traditional media are trying to adapt. Some journalists are making an effort to produce content aimed at people under 30. In Brazil, Evandro Almeida, 23, a member of the Latin American Network of Young Journalists, favours formats that appeal to his peers. He recently produced a series of long-form videos for Instagram TV (IGTV) and YouTube, about Latin Americans living in zones of war and armed conflict.

“I created this specifically for social media, to inform young audiences in the region about what’s happening in other countries,” Almeida says. “Since 2019, all my reports have a social media focus, to attract new young audiences.”

A similar story is that of Noelia Esquivel, 25, a reporter for The Voice of Guanacaste, an independent media outlet in Costa Rica. She has increasingly abandoned traditional media sources in favour of digital media. Her preference is for news bulletins received by email.

While she believes that young people in her country are turning to social networks to find information, Esquivel recognizes that more needs to be done to capture young audiences with more engaging formats. “They spend a lot of time on social networks,” she notes. “That's where they find out how their friends are doing, but also what’s happening in their country, their region, and the world.”

The switch to digital media appears to be justified, considering that fifty-one per cent of internet users surveyed in Latin America say the main reason they use social networks is to keep up with the news, according to a 2020 GlobalWebIndex report. All the more reason to strengthen internet access in the region – to reduce the gap between those who have easy access to news content and the “information- poor”.