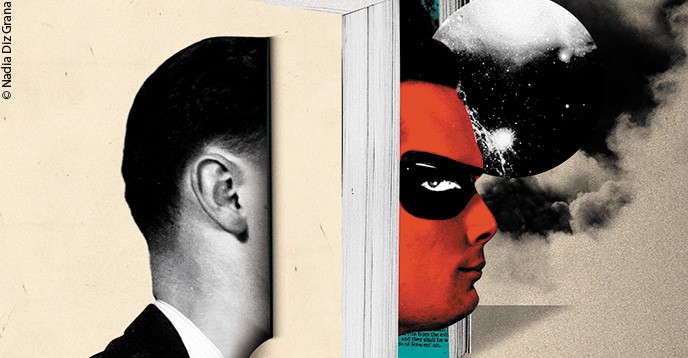 Literary plots have long been connected to conspiracy theories, which are, in essence,  acts of the imagination. But these fictitious notions – often created under the guise of making sense of the world around us – can sometimes have very real, even tragic, consequences on our lives, the author explains.

Peter Knight
Professor of American Studies at the University of Manchester, United Kingdom, and  visiting professor at Leiden University in the Netherlands. He is the author of Conspiracy Culture (2000) and The Kennedy Assassination (2007), and co-editor, with Michael Butter, of the Routledge Handbook of Conspiracy Theories (2020).

Literature has long had a fascination with esoteric knowledge, secret societies and conspiracies – from Euripides’ Bacchae to Dan Brown’s The Da Vinci Code. A good conspiracy by definition leaves no traces, and so a conspiracy theory is an imaginative speculation about the existence of a secret group behind the scenes, cunningly manipulating events. Conspiracy theories create a narrative that promises to make sense of otherwise random events, seeing them as part of one vast, overarching plot.

While many conspiracy fictions merely provide entertainment, they can sometimes have a surprising effect on the real world. The storming of the Capitol in Washington DC on 6 January 2021, for example, was in part inspired by The Turner Diaries, a conspiracy-infused novel from 1978 that imagines an apocalyptic, white supremacist uprising. That anti-government novel also influenced Timothy McVeigh, who blew up the federal building in Oklahoma City in 1995, killing 168 people.

Although conspiracy theories about the Illuminati date back to the 1790s, many of the most fantastical versions of this story circulating on the internet today are unwittingly derived from The Illuminatus! Trilogy (1975), a madcap, counter-cultural novel written by Robert Shea and Robert Anton Wilson, two editors at Playboy magazine. Intrigued by the endless letters to the magazine asserting all manner of unbelievable conspiracy theories, Shea’s and Wilson’s starting premise for the novel was imagining what if “all these nuts are right, and every single conspiracy they complain about really exists”.

The most significant example of a fabricated conspiracy text being taken for real is the Protocols of the Elders of Zion. This forged document was first published in 1903 in Russia, and was presented as the record of a secret meeting of Jewish elders who are plotting world domination. By 1921, it was shown to be a forgery, but that did not stop it from becoming part of the Nazis’ justification for the Holocaust.

Protocols still circulates in many countries today, and underpins many contemporary conspiracy theories directed against “elites”, “globalists” and “financiers” – often code words for Jews. Research has demonstrated that parts of the text were adapted from an obscure nineteenth-century German novel – Biarritz, published in 1868 by the anti-Semitic German writer, Hermann Goedsche – while other elements were taken from Dialogue aux enfers entre Machiavel et Montesquieu (The Dialogue in Hell Between Machiavelli and Montesquieu), a satirical French pamphlet published by Maurice Joly in 1864, attacking the regime of Napoleon III. Plagiarized from fiction, Protocols presents a fictional conspiracy, which in turn has – with tragic consequences – come to be taken as fact.

For readers, fictional texts – including forgeries like Protocols – have the advantage over the modes (such as the exposé, the pamphlet, the documentary) in which conspiracy theories more often appear, because they can dramatize the supposed moments of conspiring in smoke-filled rooms. Although literature had long dabbled in conspiracies and secret societies, it was not until the nineteenth century that they became a central element of the drama.

The genres of the Gothic and the melodrama, for example, regularly feature lurid tales of villains secretly manipulating their innocent victims in evil schemes. The nineteenth century in Germany saw the emergence of the Geheimbundroman or secret society novel, while British writers were both fascinated and revulsed by the spectre of Masonic, Italian and Irish secret societies plotting against the government.

But it was with the detective story and the thriller that conspiracy fiction really came into its own around the turn of the twentieth century. These genres were anchored in the suspicion that there is a deeper reality hidden beneath the confusion of surface detail.

Identifying with a heroic figure

However, conspiracy fiction does not merely show the inner workings of the conspiracy in a way that eludes the paper trails of more supposedly factual versions. It also often encourages readers to identify with an individual character – usually a lone, heroic detective figure. In detective fiction and conspiracy thrillers there are actually two stories, pulling in opposite directions. One narrative is the detective’s journey of discovery, the page-turning story that rushes ever more rapidly forward – from the initial realization that everything he or she believed is a lie, to a final exposure of the plot and the hoped-for restoration of order in the present.

At the same time, however, there is the story of the original crime, which happens before the book starts. Often in conspiracy fiction, the more the detective discovers about the conspiracy, the more the imagined plot becomes vast. The tension between these two narrative structures helps explain why the path to the final discovery in conspiracy fiction is endlessly delayed, as we discover repeatedly that what we thought to be the truth was merely a false clue planted by the evil conspirators. Much of the pleasure of conspiracy fiction comes from wanting to get to the grand revelation, but also wanting to never quite reach that destination.

The literary focus on suspicion and interpretation has its roots in nineteenth-century writers such as Edgar Allen Poe and Henry James, and became a mainstay of modernist writing in the twentieth century. However, conspiracy fiction reached its full flowering in post-Second World War American literature. The theme of conspiracy is a central concern in some of the most prominent post-war American writers, including William S. Burroughs, Don DeLillo, Joseph Heller, Ken Kesey and Thomas Pynchon.

They repeatedly create scenarios in which the hero (nearly always a white man) feels that his liberty, identity and agency – and even his body – are in danger of being controlled by vast, shadowy forces. In order to understand What Is Really Going On, these fictions wilfully embrace a form of what Pynchon has called “creative paranoia”. They present conspiracy theory as a way of understanding impersonal systems in the age of state power, corporate capitalism and mass media. The conspiracy is no longer an easily detected foreign plot to infiltrate the nation, but a more ambiguous and pervasive threat from within.

Given this situation, it is not surprising that much of this fiction focuses self-consciously on the question of how we know what we think we know. There has been a shift from conspiracy narratives that dramatize plots, to conspiracy theory narratives that ponder the possible existence of such plots. These more recent fictions often have ambiguous, inconclusive endings, as the detective surrogate is never entirely sure if the clues have merely been red herrings.

If modernist writing invites a form of paranoid reading – because it encourages readers to discover hidden significances and concealed allusions – then postmodernist writing demands what has been called “meta-paranoia”, a self-reflexive focus on questions of radical suspicion. As conspiracy fictions by sci-fi writers such as Philip K. Dick or films such as The Matrix suggest, what we assume to be reality might itself be a deceptive construct designed by an evil conspiracy. Trust no one, as The X-Files television drama series puts it.

The focus of postmodern conspiracy literature on the uncertainty of knowledge is also in keeping with the dominant mode of literary and cultural criticism in recent decades – fuelled by what the French literary critic Paul Ricoeur called the “hermeneutic of suspicion”. The tradition of critique begins with Marx, Nietzsche and Freud, who sought to reveal the hidden economic, moral, and psychological forces that govern human behaviour and the unfolding of history.

Nothing is as it seems

This mode of interpretation starts from the assumption that there is a deeper reality that lies beneath deceptive surface appearances, and it is the task of the critic to detect it. In a similar fashion, conspiracy theories start from the assumption that nothing is as it seems, nothing happens by accident, and everything is connected. Conspiracy theories often involve dangerous delusions, and the literature of conspiracy has at times contributed to those harms.

But at its best, conspiracy fiction creatively explores the blurred boundary between justified interpretation and paranoid over-interpretation. It forces readers to think about the nature of free will, especially in an increasingly complex global economy – leaving us to make an impossible choice between a world of pure randomness in which nothing makes sense, and a world of total conspiracy in which everything has been planned in advance.

By placing the reader in the position of the detective, the literature of conspiracy can help us understand the seductive attractions of conspiracy thinking, while also providing a thoughtful reflection on the problems of conspiracy as a way of making sense of the world.

Coming to terms with time, by Paul Ricoeur, The UNESCO Courier, April 1991