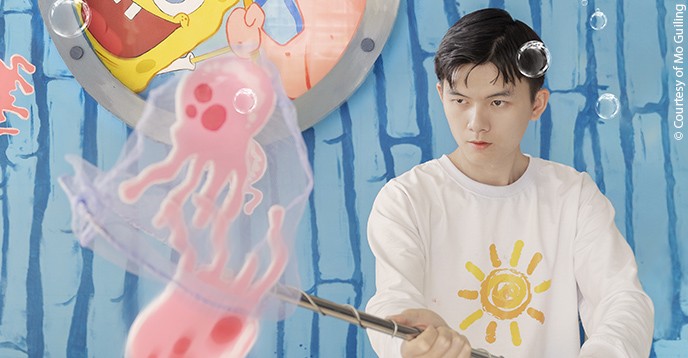 An artwork by Mo Guiling, inspired by the animated television series SpongeBob SquarePants.

Juggling jobs comes naturally to these city dwellers, who are educated, well-travelled, and at ease with digital technologies. Slashers, unlike earlier generations, do not hesitate to try their hand at different professions and careers – all at the same time. Following their dreams, these young people are quick to acquire new skills – whether it is painting murals or playing ancient instruments, hip-hop dancing or creating fashion – and share them via social media.

Zhang Yiwu
Professor of Chinese Literature at Peking University, literary critic and author, his most recent book is Strict and Honest Spirit: The Profound Force of Chinese Spirit, 2016.

Jiajia, a 26-year-old fashion design graduate from China’s Anhui province, has tried her hand at many things. She has been a cosmetics model, donned a mascot suit to hand out flyers, worked as a reception greeter, and as an English typist. This young artist is now an art influencer with 6 million followers on Douyin – the Chinese version of TikTok, the short-form video platform – where she now documents her skills as a muralist.

When Jiajia  first started sharing videos on the platform, the idea was merely to document how she painted murals. But that changed with her increasing popularity – the artist, whose real name is Zhang Lijia, now goes by Muralist Jiajia. Live-streaming her work and interacting with her fans is now a full-time job.

Jiajia represents the best of China's Generation Z. Born between 1996 and 2010,  Zoomers – as Gen Zs are sometimes called – are digital natives who grew up with the internet. In many ways, their lives echo China's internet boom in the past two decades.

For this generation, social media is the main form of communication, entertainment, and news. It can also lead to very lucrative careers. The total views of art-related videos on Douyin hit 2.1 trillion as of December 2020 – approximately 300,000 times the visits to New York’s Metropolitan Museum of Art in 2019.

Like Jiajia in the early years of her career, when she tried different jobs, more and more young Chinese are choosing to adopt a freelance lifestyle that enables them to have more than one job or identity. Known as China’s slash generation [the term “slash career” was originally coined by The New York Times columnist Marci Alboher in 2007, and popularized in China by writer/dancer/entrepreneur Susan Kuang and her 2016 book, Slasher Generation], the term refers to people who enjoy having multiple work identities and the “/” symbol in their job description.

Growing up at the height of China’s economic growth, Gen Z represents a cultural shift from previous generations. For the slash generation, individuality, flexible working hours, creativity and entrepreneurship are more attractive than the conventional career path – that ideally included a state office job, with a long tenure, social benefits and stability – their predecessors valued.

According to a 2019 report from the state-owned Xinhua News Agency, China’s slashers have exceeded 80 million – a number which is expected to grow. The majority of these youth are well-educated urban dwellers with a global perspective, more choices in life, and  instinctively familiar with technology. The slash lifestyle gained such popularity as a cultural phenomenon that a Slasher Festival was organized at a luxury shopping mall in Xi’an in 2019.

The rise of Guochao

Mo Guiling, a visual communications graduate and freelance photographer, is a typical example of the slash generation. He spends part of his time enacting his unusual ideas at home – such as imitating Mr. Bean (a British TV series from the 1990s, starring Rowan Atkinson), or covering the walls of his room entirely with newspaper – before recording them on video.

Mo’s first video went viral on Douyin, with 2.2 million likes. This encouraged him to produce more visual stories – depicting not only his personal life, but also popular culture, such as Japanese anime and American movies. His imaginative photos and videos are hilarious and thought-provoking.

Others like Mo are working to revive their traditional cultural heritage. One of the major influences shaping China’s consumer culture is the rise of Guochao (literally, Chinese style) – with fashionable retro homegrown Chinese brands of clothing. Contributing to the rise of domestic brands, Guochao has also provided a boost to the country’s fashion industry.

Fascinated by the richness of their cultural heritage, China’s young zoomers and influencers are keen to promote it. Peng Jingxuan, a 25-year-old from Wuhan who has been in France since 2017 – studying for a master's in musicology at the Bordeaux Montaigne University – is one of them.

Realizing that people outside China knew very little about traditional Chinese musical instruments, she decided to introduce them to the sounds of the guzheng – a Chinese zither, a plucked string instrument dating back to the Qin dynasty, over 2,000 years ago.

Dressed in a traditional Han Chinese gown, Peng started performing on her beautiful guzheng in front of the Grand-Théâtre, Bordeaux’s opera house. She has recorded her music and travels across Europe, where she has performed on her guzheng at many places – including the foot of the Eiffel Tower, the banks of Lake Geneva, or at a wedding in a French chateau.

Peng has over 7.7 million fans on Douyin. “When I hear people clapping at the end of the show, I am always filled with national pride,” she told the China Daily in April 2020.

With opportunities to connect with the rest of the world through the internet, China’s Gen Z is more open and approachable. They are often well-travelled. Like their peers in other parts of the world, they have a strong interest in issues like the environment and climate change, are concerned about vulnerable populations and animal welfare, and actively seek social change.

China’s youth are involved in community affairs, and often volunteer, as a result. The recent renaissance of traditional culture and lifestyle changes demonstrates that their voices are actually being heard. We have every reason to believe that their vision for a more diverse society will prevail in the future.

Nüshu: from tears to sunshine, The UNESCO Courier, January-March 2018

Prescriptions for a sick planet, The UNESCO Courier, July-September 2011