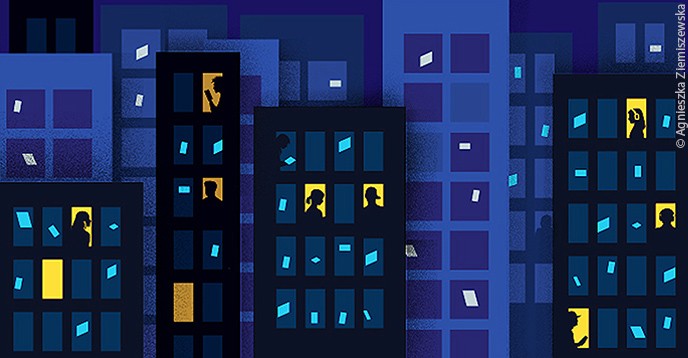 It is easy to believe that young people, born in the digital age, would naturally be better equipped with the necessary skills to use new technologies. Beyond the cliché, however, the reality is much more complex. The ability of the younger generation to master new digital tools depends very much on their socio-economic backgrounds and family environment.

Sue Bennett
Head of School, Faculty of the Arts, Social Sciences and Humanities, and at the School of Education, University of Woolongong, Australia, with an expertise in information and communication technologies in education.

The idea of young people being ‘digital natives’ – a term coined by education consultant and author Marc Prensky – first became popular twenty years ago. They have also been referred to as the ‘net generation’ and ‘smartphone generation’, seeking to capture the same central idea that younger generations are fundamentally different because of their exposure to technology.

It was claimed that young people could multitask more easily, had shorter attention spans, preferred visuals and interactivity, and liked using technology more. As a consequence, a radical change would be needed to ensure that old-fashioned ideas and institutions did not limit the capacities of these young generations.

The problem was that much of this early commentary was based on observations and anecdotes, with little hard evidence to back up these claims. But the idea soon began to attract the attention of researchers who were keen to investigate whether the claims stacked up. From the mid-2000s, studies were done around the world to look at how young people used technology for their education and in their everyday lives.

Researchers conducted large-scale surveys asking about what devices young people had access to, what apps and platforms they used, and how often. Detailed, smaller-scale studies to observe technology use were also carried out in school and higher-education classrooms, homes and community settings.

The results from this extensive and careful work have repeatedly pointed to the same conclusion – that young people are not as easily categorized as the ‘digital native’ label suggests. They are, in fact, very diverse in the ways they use and think about digital technology. Also, comparisons between generations have not provided evidence that younger people have an inherent advantage. Older people can and do become skilled and confident using the same technologies.

Even more importantly, within the younger generation, socio-economic factors were found to play a major role in the opportunities young people have to develop technology skills and knowledge. These affect their opportunities for education, work, and social connection.

A 2007 study in the United Kingdom of 1,500 9- to 19-year-olds, for example, found that higher-income households had better quality of access, allowing more frequent use – which allowed them to develop greater confidence and proficiency with technology. And a 2008 study in the United States of 18- to 26-year-olds found that those with higher levels of education undertook online activities that were more self-enhancing.

The continuation of these patterns was captured in the 2015 Organisation for Economic Cooperation and Development (OECD) report, Students, Computers and Learning: Making the Connection. It suggests that while material access to technology has increased, young people from more advantaged backgrounds spend their time online doing activities that develop more comprehensive and beneficial skills. This reveals ongoing ‘digital divides’ between those who have been able to develop the capabilities to use the technology effectively to achieve their desired outcomes, and those who have not.

Breaking away from stereotypes

We must resist making generalizations and assumptions about young people and technology. There is an undeniable attraction to generational traits, and there is no denying that we are all shaped by the times we are born into. But that overlooks much more important contextual differences that influence our development and shape our life chances. Ascribing characteristics according to age is misleading, and may actually be harmful because it causes us to overlook barriers and inequities.

Taking a more nuanced view would allow us to delve deeper into how socio-economic circumstances play a role in technology use – and the opportunities that being skilled and confident with technology provide us.

Appreciating that technology access is variable is a next critical step. As the cost of purchasing technology has come down, more young people have access to devices, and often devices of their own. But there are distinct differences between what can be accomplished on a mobile phone compared to a laptop, and between the quality of limited mobile data access and high-speed broadband. Well-equipped homes made the transition to learning and working from home fairly easily. It was much more challenging for households with limited devices and connectivity. And as the pandemic restricted movement and capacity, many young people lost access to free public Wi-Fi, or fast access at school, college, university or workplaces.

We must also recognize that social contexts shape technology use. This includes how families, educators, friends and communities use technology for learning, work, and play. These social contacts shape how young people see the possibilities for technologies in their lives. With the Covid-19 pandemic keeping us physically apart, we have become more dependent on technology than ever. As a result, better access and richer social networks are distinct advantages.

Even before the pandemic, technology had become increasingly essential to educational attainment, working life, social engagement and leisure. The rapid shift to emergency remote teaching, working from home, and socializing online, has only accelerated the trend.

Ultimately, ‘digital as default’ has brought the digital inequalities that have long existed into sharp relief. This should provoke us to further scrutinize those differences, and to act to create a more digitally inclusive society for people of all ages.

An opportunity to reinvent school, The UNESCO Courier, July-September 2020