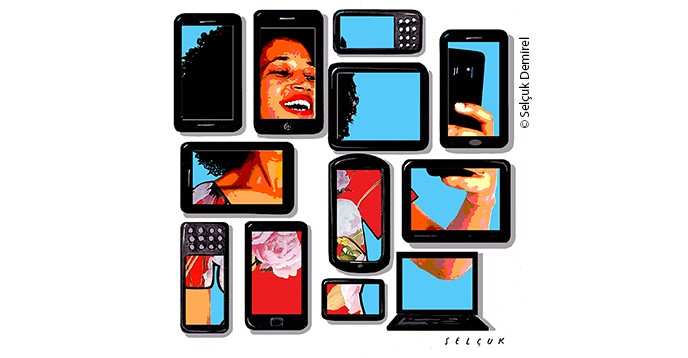 Unheard of until recently, the profession of influencer is enjoying growing success on the continent. Eager to acquire a young and connected clientele, companies are now eyeing the most popular of these new social media celebrities.

Kesia Ebale
Journalist based in Kinshasa, Democratic Republic of the Congo.

A year ago, Elsa Majimbo led an anonymous and quiet life as a journalism student in Nairobi, Kenya. Caught off guard like much of the world by the Covid-19 pandemic, she started posting comedy sketches on her Instagram account, to counter the monotony of the lockdown. With her poorly-framed videos – punctuated by bursts of laughter and handfuls of potato chips consumed between gags – the 18-year-old saw the number of her followers soar.

Shared tens of thousands of times, her messages caught the attention of Rihanna, the megastar singer, actress, and businesswoman. That was quite a coup for Majimbo, who now boasts 2.2 million followers, and recently went into partnership with Italian fashion designer Valentino to promote her brand.

In just a few months, Majimbo has become one of East Africa’s influencers – someone who has the power to affect the buying habits or quantifiable actions of others, using social media. She  has joined the exalted ranks of “content creators” who monetize the fame they have acquired on Instagram, YouTube or Twitter.

Fashion, lifestyle, music, humour, cooking, and beauty are the most popular – and therefore the most profitable – topics for influencers. In Africa – the world's youngest continent, where the smartphone market has exploded in recent years – this new career is attracting a growing number of young people enticed by the digital spotlight and the promise of significant wealth for some. The mega influencers – those who have more than a million followers – remain a miniscule  minority.

A phenomenon that has evolved

The influencer phenomenon, which started about a decade ago, has evolved since. While many of the social media stars started out as activists for change, they now target local or multinational companies, such as telecommunications providers, hotel chains, airlines, etc. “Influencers born on Twitter in the 2010s began by demanding an internet for all, and denouncing the digital divide,” explains Kahi Lumumba, founder and CEO of Totem Experience, a digital marketing agency in Abidjan.

“In Côte d'Ivoire, for example, [content creator, web activist, blogger and brand influencer] Edith Brou, one of the most followed personalities in the country today, began by relaying information on the 2010 political crisis,” he adds.

The practice of using digital platforms to advocate a cause has not stopped. In fact, it is  encouraged by some private companies involved in the fight against inequality, discrimination or global warming. “Every year, the Ivorian Electricity Company gives awards to the country’s best students. Influencers are recruited to advertise the initiative. We have also worked with the International Organization for Migration (IOM) to make young people more aware of issues related to illegal migration,” continues Lumumba.

But today’s social media stars are mainly sought-after by companies wanting to attract a young and connected urban audience. Totem Experience connects brands – keen to promote their new services – with influencers followed by a loyal community. For instance, about fifteen influencers recently posted videos on their personal accounts, featuring delivery men to promote a home delivery app created in Abidjan. “For companies, it's a way to increase sales and get closer to their customers,” says Lumumba, whose agency will soon expand from thirty to fifty employees.

These stars of the web are usually paid for promoting  and advertising photos or videos. Depending on the number of clicks they attract, a bonus is often added to their fee. Influencers who work in fashion, travel or tourism also receive benefits in kind – such as clothing or free stays in luxury hotels, which, of course, they must in turn promote among their followers.

It is difficult to estimate how many influencers make a living by relying solely on the profession in Africa. Most of them have another job or side business to fall back on. The very limited circle of mega influencers are more likely to be A-list celebrities known for talent in their own right, like singers, actors, sports stars or fashion icons, rather than those who have gained fame only through the internet.

In French-speaking West Africa, “Dudu fait des vidéos” is a popular web influencer. Known for his depictions of daily life in Dakar, Senegal, Dudu – whose real name is Mouhamadou Ndiaye – has struck a deal with a mobile phone company with a strong presence in Africa to promote his videos.

On the other side of the continent, South Africa's Kefilwe Mabote – who has 1.1 million followers on Instagram – has built a solid reputation in the fashion and luxury market. A formidable businesswoman, she has forged partnerships with prestigious international brands. In April 2020, she published a book, Kefilwe Mabote: Influencer De Luxe: From Soweto to Milan, which recounts her success story.

While many of the same trends can be observed throughout the continent – particularly regarding  the popularity of the topics covered – significant disparities still exist from one country to another, and from one African region to another. Not all countries have the same level of digital  infrastructure and network quality. The influencer business reminds us of a truth that is often ignored by marketers – that there is not just one Africa, but many.

Experts believe that the situation will become more equitable  in the coming years. “Once Central Africa has the infrastructure it currently lacks, there will be a tidal wave. In the creative world in general, the Democratic Republic of the Congo [DRC] makes a difference,” predicts Lumumba. The grandson of Congolese independence leader Patrice Lumumba, he is banking on Kinshasa – the largest city in French-speaking Africa – to become a hub for digital creativity.

The young entrepreneur hopes that the Congolese singers Innoss'B, Gaz Mawete, and Moise Mbiye – whose Instagram accounts are currently the most popular in the DRC – will soon share the spotlight with new network stars, boosting the promising market of influencers in this country of over 80 million people.