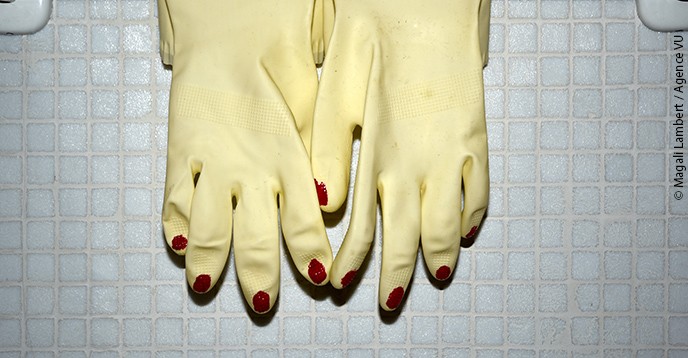 “The pandemic has highlighted the invisible and unpaid service labour that is usually performed by women.” Photo from the series At home, March 2020.

The higher value placed on human life, the rise of the influence of health services, the medicalization of our lives, the extension of state power – these phenomena did not arise from the crisis caused by the pandemic, but were revealed by it.

Associate professor at the Moscow School of Social and Economic Sciences (MSSES), and Associate Fellow, Russia and Eurasia Programme at Chatham House, The Royal Institute of International Affairs, London.

While it is too early to discuss the consequences of the pandemic, we can already see trends emerging that did not arise from the crisis, but which the crisis has made salient. Societies, governance systems, businesses and citizens can only react with the tools they had before the emergency. As it is often said, generals are always fighting the last war. From this perspective, we are all generals, individually and collectively.

What the recent global health crisis has revealed is that governments can no longer afford to allow an epidemic to spread. If they want to ensure their political survival, they must show they are doing everything possible to preserve human life.

In the past, the emergence and spread of a disease like COVID-19 would have been considered inevitable. However, in view of our current ethical requirements, this is no longer possible – because of the higher value placed on human life.

The primacy of human life

In the twentieth century, citizens could accept having their freedoms restricted in the name of high ideals or superior goals – victory over the enemy, the construction of a great work or the promise of a golden age. In the twenty-first century, it is not the prospect of a bright future that leads people to accept a curtailing of their freedoms, but the desire to avoid a large number of casualties. Today, the constraints that we are under – and which many perceive as a sign of increased state violence – are in fact the corollary of our need for security.

Life has become so precious that no government in the world can afford a loss of life that society considers preventable. Moreover, it should be noted that states – whether democratic or authoritarian – have taken measures that are quite similar in terms of restrictions on freedoms.

They have, however, adopted very different strategies to support the economy, shattered by the shock of the epidemic and lockdown. The modern economy is based on services, and not on the exploitation of resources. It is therefore rational to preserve people – producers and consumers of services – even if it may seem unprofitable in the short term, from a strictly economic point of view.

During this crisis, humanist culture has revealed that it is ready to make concessions on freedom  in the name of public health. The increase in life expectancy, medical progress, the cult of healthy living and the narcissistic valorization of social networks have favoured this phenomenon.

The medicalization of everyday life

The imperative of “security”, a notion to be understood as both “survival” and the “preservation of health”, has resulted in the medicalization of our daily lives. This does not refer only to the circulation of medical expressions and practices in our lives. Tomorrow, it could well extend to political processes and governance – if the international community were to decide, for example, that the fight against diseases requires the same level of co-ordination as the fight against terrorism.

Medical knowledge – and with it, the pseudoscientific representations that flourish, particularly online – has invaded everyday language and entered our daily lives. Soon, no one will be surprised by the presence of temperature-measuring devices in public places, in the same way that we have become accustomed to metal detectors. Soon, we will hardly remember the time when consulting a doctor was a matter of free will. Perhaps tomorrow, people with fevers will be placed under house arrest, as we have just been.

The medicalization of everyday life also means an increased role for the health services, including in the political field. This process can be observed at the state level, but also at the global level. The political importance of the World Health Organization (WHO) is measured not only by the number of countries that implement its epidemiological recommendations, but also by the harshness of the political resistance to these recommendations.

The resumption of international trade, air transport and travel will necessitate the development of a new set of global health rules and regulations, in the near future. The supranational body responsible for formulating these recommendations and monitoring their implementation, if it is created, will become an important player in international relations.

While the world has suddenly closed in on itself, it has never been more connected. This common  tragedy has united humanity around a shared cause. Such a communion of destiny may not have occurred since the race for the atom bomb – with the difference that today, citizens are much more involved in world events.

It is at these pivotal moments that alliances that will shape the world of tomorrow are forged – as was the case after the two world wars that shook the twentieth century. Who will be the winners? Who could be the new members of an Anti-Virus Security Council? It is too soon to say.

What is certain, though, is that the industrialized countries will have to assume greater responsibility for addressing the shortcomings of the health systems of poorer countries.  Otherwise the efforts made to combat a pandemic will be in vain. The benefits of drastic measures such as lockdowns will be negated if a new outbreak occurs in a country that is unable to contain an epidemic.

We have just lived through a common experience – one that was lived and shared by a very large number of people at the same time. It is similar to what happened when the Twin Towers collapsed in New York, nearly twenty years ago.

The 11 September 2001 attacks in the United States marked a turning point. After that date, extensive powers were granted to security services around the globe, and the surveillance of citizens was intensified. Practices such as the installation of cameras in public places, the use of  facial recognition software and wiretapping systems became widespread after the attacks. Our daily lives – especially our air travel, with its series of controls that we now consider normal – have also been altered.

During this crisis, certain states have taken advantage of the coronavirus epidemic to legally expand their powers of surveillance and use of citizen data. We see thus, how extraordinary circumstances justify and legitimize surveillance and control, in the eyes of societies. The same applies to democratic regimes. The epidemic threatens to erode privacy even further. In democracies at least, counterbalancing powers exist to limit this intrusion into our data. This is not the case in autocratic regimes.

The threat is all the more real in times of an epidemic, when everything favours the power of the state – starting with the economic crisis generated by the health crisis, which makes public companies and institutions almost the only solvent employers. The crisis also strengthens the welfare state, which acts as a safety net – perhaps turning workers into recipients of a universal income tomorrow.

While the world was in lockdown, millions of people realized that working remotely, in all its forms, is more beneficial to the employer than to the employee. Thanks to this new organization of work, the costs of heating, maintenance, rent, and even equipment, were now borne by the employee.

Moreover, the boundaries between working time and personal time, between workspace and living space, tend to become blurred. Such a trend undermines the hard-won rights acquired by social and trade-union movements in the nineteenth and twentieth centuries. It brings us back – albeit at a new technical level – to an earlier situation, when relations between employees and employers were poorly regulated, work was often carried out at home, and paid for on a piecework basis.

During this unprecedented lockdown period, employees also found themselves obliged to take on service functions normally performed by others – such as childcare, care of the elderly, cooking or other domestic tasks. The pandemic has highlighted this invisible and unpaid service labour – sometimes referred to as a “second GDP”– that is usually performed by women. The crisis may provide an opportunity to discuss the need to pay for these forms of invisible work.

It is always in the wake of major disasters that the international relations system has been reorganized. The First World War gave birth to the League of Nations, the Second World War, to the United Nations. On the basis of a common experience, humanity united and designed for itself new instruments, new mechanisms of governance. New institutions could emerge from the current crisis.

Unlike other past tragedies that pitted humankind against each other, the pandemic confronts us with only a virus. So, we have no one to hate. In the face of this crisis, we have no other choice but to show solidarity.

The ethical risks of AI, The UNESCO Courier, July-September 2018

Humanitude, or how to quench the thirst for humanity, The UNESCO Courier, July-September 2017

The impact of social change, The UNESCO Courier, November 1959