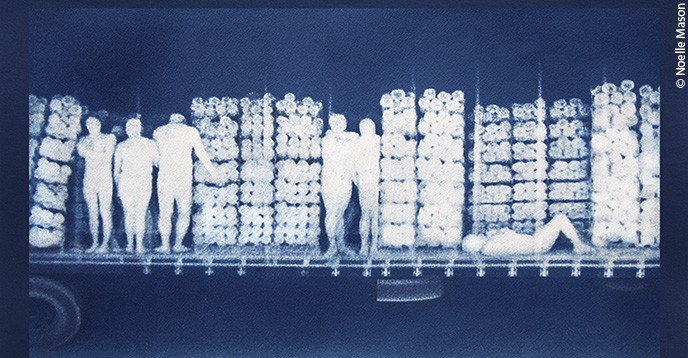 Backscatter Blueprint (Primavera), cyanotype based on an X-ray image that reveals human cargo in trucks. Noelle Mason, the artist, questions the imagery produced by surveillance technologies.

Today's borders are no longer necessarily made of bricks and barbed wire. They are increasingly becoming moving barriers that rely on cutting-edge technologies and complex regulations to impose travel restrictions on citizens. The COVID-19 pandemic has further accentuated this phenomenon.

Ayelet Shachar
Director at the Max Planck Institute for the Study of Religious and Ethnic Diversity, in Göttingen, Germany. The Shifting Border: Legal Cartographies of Migration and Mobility is her most recent book.

In 1989, with the fall of the Berlin Wall, many predicted that sealed gates would soon become relics of a bygone era. Today, we find a different reality. Instead of disappearing, borders are metamorphosing. The border itself has evolved to become a moving barrier, an unmoored legal construct. It has broken free of the map; it may extend beyond the edge of territories or into their interiors. The unmooring of state power from any fixed geographical marker has created a new paradigm: the shifting border.

The shifting border is not fixed in time and place; it consists of legal portals rather than physical barriers. Responses to the global pandemic have accelerated this trend.

In January 2020, when a cluster of mysterious viral pneumonia cases struck in Wuhan, China, neighbouring Asian countries – that had already borne the brunt of the SARS and MERS outbreaks – wasted no time. In addition to public health responses, they introduced travel bans that restricted access to their territories.

Regulation of entry can now happen in foreign transit hubs, located even thousands of miles away. In Canada, for instance, anyone – including its citizens – presenting with COVID-19 symptoms were barred from boarding a Canada-bound plane. With this move, the country  stretched its borders outwards both conceptually and legally – relocating its border-control activities to overseas gateways, primarily in Europe and Asia.

Remarkably, on the latest count (May 2020), nearly 200 countries have imposed such travel restrictions by banning inbound and outbound travel. At the height of the crisis, ninety-one per cent of the global population were living in countries that had introduced travel restrictions in response to COVID-19. None of these legally mandated bans on entry (and in some countries, exit) required even one battalion of soldiers to move to the edge of the territory, or a single sack of cement to be placed at the border. Instead, governments shifted the border to regulate mobility by blocking travellers before they embark, and even after they reach their destination – by being told to wear GPS wristbands, for example. Experts in the travel industry have suggested that individuals may prefer to pre-quarantine in their home countries.

Until a vaccine is developed, it is clear that the management of mobility and migration will be deeply altered. What resembled science fiction is now a reality. Israel’s Ben-Gurion airport, already known for its strict security protocol, is now in the process of developing a “seamless” check-in process, whereby no human agent is involved. The goal is to create “coronavirus-free transportation hubs” and insulated “zones” or “bubbles” in which travel will resume. Only the healthy will be permitted through these “sterile” corridors.

These developments raise significant ethical and legal dilemmas. Health will become an invaluable asset, a prerequisite to travel. Countries including Chile, Germany, Italy and the United Kingdom are exploring the idea of “immunity passports” – granting access to public life and mobility for some, while reducing it for others.

Even prior to the pandemic, governments were increasing their reliance on the biometric regulation of migration – which provides unprecedented technological “see-all” eyes to monitor and track everyone’s mobility everywhere.

With the simultaneous rise of big data and the creation of vast databases that record biometric information of travellers, our bodies will become our admission tickets as biometric borders expand their reach. Countries including Australia, China, Japan, the United States, and the United Arab Emirates are leading the way. Dubai International Airport has introduced a pilot of new “biometric borders”– known as smart tunnels – that identify passengers through scans of a user’s iris and face.

To achieve this Orwellian vision, the location, operation, and logic of the border have to be redefined to allow governments or their delegates to screen and intercept travellers earlier, more frequently, and more distantly. Thus, travellers are tracked as they move through multiple check-points along the travel continuum.

As part of the effort to achieve migration and mobility management, an “electronic travel authorization” will now be required for the European Union – even for those who benefit from visa-free travel and are in possession of internationally coveted passports. The European Travel Information and Authorization System (ETIAS), to be launched in 2022, will serve as a clearing-house for pre-travel authorization for visitors to all twenty-six countries in the Schengen area.

Linked to their passports, this additional layer of information-gathering creates a powerful yet invisible shifting border that is operational anywhere in the world – prior to departure, adjusting itself to the location and risk profile of the traveller.

A border in each of us

Other projects, such as the EU-funded pilot project called iBorderCtrl, add futuristic dimensions to mobility regulation. Incoming travellers are required to “perform a short, automated, non-invasive interview with an avatar [and] undergo a lie detector.” The data is then stored in large interconnected databases – allowing authorities to “calculate a cumulative risk factor for each individual.”

The calculated risk factor will appear in any future border crossing and may lead to further checks, or even a denial of entry. The iBorderCtrl avatar is trained to detect human deception by looking for “micro-gestures.” Similar developments may soon be operational in the US, where AI-powered screening systems can track changes in blood flow or subtle eye ticks. The once-fixed border is thus not just shifting, but also multiplying and fracturing. Each person effectively “carries” the border with them.

These developments bear dramatic implications for the scope of rights and liberties. Treating the body as the site of regulation is no longer solely a purview of national governments. Major tech companies are heavily involved in data-mining and geolocating those who have tested positive for the virus (sometimes without consent).

But the very same crisis has shown us that another future is within reach. In response to the pandemic, the Portuguese government declared that all immigrants already on its territory – including asylum seekers – would gain access to the same rights as citizens to “health, social security, and job and housing stability as a duty of a solidarity society in times of crisis.” Here, sharing the same risks, in the same place, at the same time, created camaraderie and community.

When the day comes that we can better treat this deadly virus, we will be left with the task of undoing its harsh, exclusionary impacts.

The other side of the coin, The UNESCO Courier, April-June 2019

African brain drain: Is there an alternative? The UNESCO Courier, January-March 2018