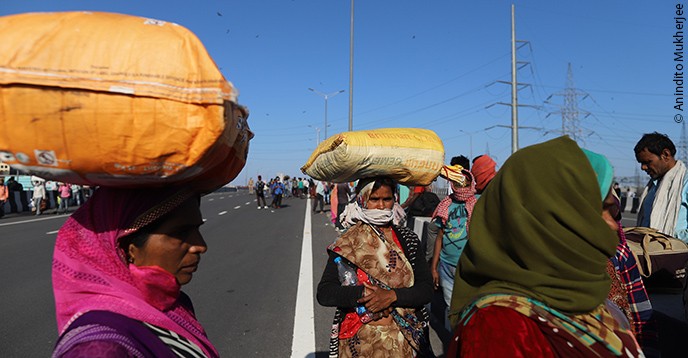 The announcement of a lockdown in India resulted in a mass exodus of migrant workers from the cities to their villages. New Delhi, March 2020.

Social inequalities, gender violence, poor housing, failing health systems – the health crisis has exposed the fractures that divide our societies. To change the world, we will have to address challenges that we have not been able to face up to so far.

Kalpana Sharma
Independent journalist, columnist and author, based in Mumbai. The Silence and the Storm: Narratives of violence against women in India is her most recent book.

When you can spot the speck of a fishing boat on the horizon with your naked eye, you know that something has changed. The usual suffocating brown cloud has lifted. The air is clear. And the sky is a blue that you have forgotten.

The world has changed in 2020. A new coronavirus has literally knocked the air out of the world. Each day brings greater uncertainty, more news of death and infection, and increasing anxiety about jobs and the economy as we battle a disease that has no cure – yet.

Nothing can prepare you for the unexpected. But if there is one lesson to be learned, it is that those countries that invested in affordable and accessible health care are today best equipped to deal with an unexpected health crisis.

Given the nature of this new virus – contagious, deadly and swift – one would have expected nations, and people within nations, to come together to fight it. Instead, tragically, we have watched how COVID-19 has laid bare the existing fault-lines in all our societies.

At a time when a virus is not choosy about who it infects, our societies continue to discriminate against their own people on the basis of age-old entrenched attitudes towards the ‘other’ – be it people from another religion or another race. A pandemic cannot erase hate and prejudice; tragically, it tends to exacerbate them.

Another fault-line exposed is inequality. We can watch what the French economist Thomas Piketty terms “the violence of inequality” playing out in this crisis. Those at the bottom, without a safety net, are also the very people now struggling to stay afloat during this global pandemic.

In India, this “violence of inequality” has played out in a heartbreakingly vivid manner in the spring of 2020, as a nation of 1.3 billion people was locked down to stem the spread of COVID-19. Thousands of men and women – left adrift in cities where they had migrated, looking for work and sustenance – lost their jobs when the economy ground to a halt. With no money or safety net, they were left with no alternative but to set out on foot, walking hundreds of kilometres to reach their homes in the countryside.

They trudged in the heat, with little food and water. Some survived, but many died on the way. The images of this exodus of rural migrants are testimony to how unjust patterns of economic development elevated their suffering in the event of such an emergency.

The third fault-line that runs through every society, but jumps out at times of crisis, is that of gender. Women are “locked down” with their abusers, with few avenues of escape. Yet this phenomenon is not getting the attention it deserves. Could it be because this gross violation of the rights of millions of women across the world occurs even in so-called “normal” times?

In many countries, COVID-19 has struck hardest in urban areas. The disease has spread rapidly among the urban poor, who live in congested, often unhygienic, conditions. The chances of the people living in such conditions surviving this pandemic are slim – given the poor public health facilities, especially in most poorer countries.

These people literally hold up our cities–  the conservancy workers, those in the service industry, in construction, in small-scale industries, domestic help, caregivers, and many more. Most of them are poorly paid and live in dense urban poor settlements, where there is no running water and inadequate to non-existent sanitation.

In such settlements, the spread of COVID-19 cannot be controlled by way of physical distancing – because the urban poor have no space to escape each other. The lack of running water makes hygiene measures such as frequent hand-washing and disinfecting surfaces impossible.

Affordable housing has rarely been a priority in our cities. The consequence is what we are witnessing today. The overwhelming number of new infections have occurred in some of the most densely-packed and poorer parts of cities – whether in Mumbai or in New York.

A whiff of good news

And finally, coming back to clean air in our cities. The Global Energy Review 2020, the flagship report of the International Energy Agency (IEA) released in April, noted a record annual decline in carbon emissions of almost eight per cent this year. This is good news. Except that it is a fortunate fallout of an unfortunate crisis, and not the result of addressing the very real dangers of climate change.

COVID-19 has changed many things, yet changed nothing. But once this crisis passes, there is little to indicate that things will not return to the old, profligate ways of living. We have seen little evidence of any concrete plans to permanently reorder our cities, for instance, so that the poor can live with dignity, or where eco-friendly public transport is prioritized.

There are many challenges ahead, starting with the fundamental overhaul of our health-care systems. Countries, and states and provinces within countries, that have come out well in this crisis are those that have invested in quality public health.

The second is addressing the embedded inequities in our societies. Even the best systems fail in an unequal society. This is a long-term project, for sure, and cannot be addressed overnight. Irrespective of whether we live in countries with strong or weak economies, if there is systemic inequality, it will manifest during crises – by killing those who are already impaired and vulnerable.

“The world has enough resources for everyone's needs, but not for everyone’s greed,” Mahatma Gandhi once said. Yet, it is greed that has fuelled our economies – as borders and boundaries have lost relevance in the global fervour to satiate consumerist appetites. It has also threatened the future of the planet, as natural resources are devoured, never to be replaced.

COVID-19 has compelled us to slow down. But as and when we succeed in overcoming this particular crisis, will we witness a new world order? Will we recognize the precarious existence of millions among us? Will we hear the voices of the women, and the most vulnerable, once the noise of business-as-usual begins?

There are no easy answers. But we can, and must, ask. And, perhaps, hope.

The seeds of hate, The UNESCO Courier, March 1996

Reporting on Violence against Women and Girls: A Handbook for Journalists, UNESCO, 2019