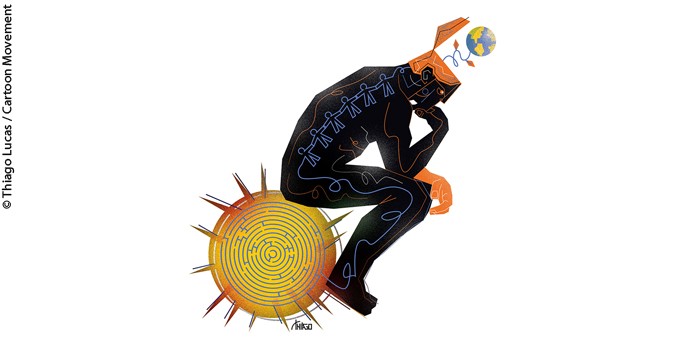 Epidemics and pandemics are not new phenomena. Leprosy, plague, cholera and smallpox have all left their deadly mark on human history. They have also led humans to question themselves, and often result in positive change.

Characterized by their rapid spread and high mortality rates, epidemics – whether they are linked to bacterial diseases, such as bubonic plague and cholera, or to viruses, such as smallpox, influenza and HIV/AIDS – have left their mark on human history since prehistoric times.

These epidemics have been responsible for a massive number of deaths – occasionally resulting in demographic disasters – and have even changed the course of history sometimes. The Great Plague of Athens, which struck the city between 430 and 426 BC, certainly precipitated the fall of the besieged city. The populations of the Inca and Aztec empires were decimated by smallpox, brought in by Spanish conquistadors in the sixteenth century. Many historians believe that the Spanish flu helped to accelerate the end of the First World War.

The lack of knowledge about the diseases that caused these epidemics and their modes of infection, led the authorities, very early on, to take the only possible sanitary measures to limit their spread. Examples include the isolation of the sick, since the eighth century, to stop the spread of leprosy; then confinement in the fourteenth century, to contain the plague, which was rampant at the time. At sea, the corpses of infected people who died on ships were thrown overboard. The first measures of forced sanitary isolation were taken in Ragusa – now Dubrovnik – in the fourteenth century; then in Venice, in the fifteenth century. Both cities had imposed several weeks of quarantine on ships at the time. This measure became widespread in major ports, including Genoa and Naples in Italy, and Marseille in France.

The search for scapegoats

The consequences of such measures proved very unfavourable for trade. Like the Justinian plague which raged through different parts of the world from the sixth to the eighth centuries, the Black Death which struck Europe in the mid-fourteenth century, severely disrupted traditional trade routes. The Mediterranean basin was abandoned in favour of the region of Flanders, which became a major trading centre in Europe. In fact, the desire not to harm trade was a significant factor in the management of epidemics – often dramatically delaying measures to curb their spread. It was not uncommon for traders and politicians to try to cover up their existence.

The history of epidemics is also marked by the emergence of popular movements against certain social groups accused of causing the disease. The massive, simultaneous and sudden loss of human lives generated such a sense of fear and disarray that it led to a quest to find the culprits – most often, the poorest and most marginalized populations, who were then discriminated against.

Pandemics caused widespread suffering, affecting entire families and villages. The Black Death killed an estimated 25 million to 40 million in Europe – a third to half of the population at the time. It took more than two centuries for the continent to regain its previous population. The Spanish flu of 1918 caused the deaths of an estimated 50 million people worldwide. It is difficult to imagine the state of devastation that this pandemic must have caused at the end of the First World War.

Confronted with death and the unexplained, these disasters led humans to reflect on their  condition. The events also drove progress in the search for treatments and preventive measures. Although medicine was still in its infancy at the end of the Middle Ages, certain hygiene measures were beginning to be imposed. As early as in the fourteenth century, the bed linen of patients was being changed. After the cholera epidemic that struck London in the mid-nineteenth  century, the authorities started monitoring the water supply.

The succession of deadly epidemics has led many countries to understand that it is more costly to treat a health crisis than to prevent it. Cholera, a pre-eminently social disease, highlighted the deplorable conditions in which most of the world’s inhabitants lived and worked. The need to implement long-term health policies gradually emerged – to promote hygiene measures, adopt sanitary codes, and conduct research into the cause of diseases and their prevention.

As diseases do not respect borders, international co-operation in public health developed during the second half of the nineteenth century. This resulted in a series of conferences and the drafting of international health conventions.

In an effort to prevent the spread of epidemics – especially cholera and the plague – while limiting trade barriers and the free movement of people as far as possible, twelve European states organized the first International Health Conference in Paris in 1851. This resulted in a draft International Sanitary Convention, accompanied by international regulations concerning the plague, yellow fever and cholera.

Though similar conferences followed, it was not until 1903 that an International Health Convention was adopted, and the second half of the twentieth century that the World Health Organization (WHO)was created, in the aftermath of the Second World War.

Even though epidemics are caused by the circulation of microbes and viruses, this does not fully explain them. Very often, they are also the result of environmental, food, migration, health, economic or political crises. Epidemics act as an aggravating factor in pre-existing crises, often caused by war and famine.

The current pandemic is no exception. It marks a crisis of our way of life. Scientific studies show that it is the systematic degradation of nature that is the root cause of the  COVID-19 pandemic – industrial animal farming and deforestation in particular. Widespread deforestation is exerting unsustainable pressure on habitats, forcing animals out of their natural environments and encouraging pathogens to jump from one species to another – as was the case for the Ebola and Zika viruses.

Epidemics put humanity to the test, with a collective threat, followed by mourning. But history has shown us that they always come to an end – and that emerging from each one, humanity has been able to reinvent itself, and even make some advances. The current pandemic could similarly lead to a world that is more respectful of the environment and of human life.