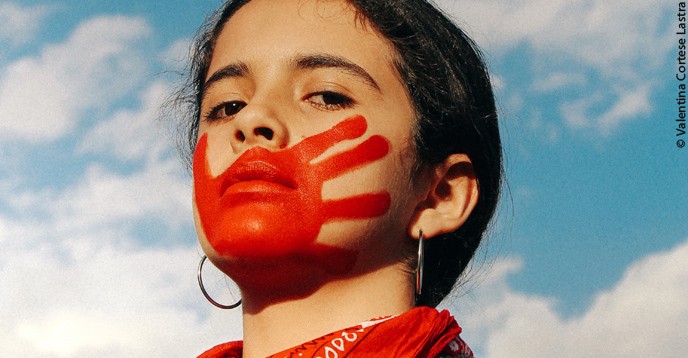 A girl participating in a performance by women of all ages in Chile, in a protest to mark the International Day for the Elimination of Violence against Women, 25 November 2019.

Declining incomes, school drop-outs, the growth of informal work, and steep rises in unemployment – the social consequences of the health crisis for the inhabitants of Latin America and the Caribbean region have been massive. The author calls for the establishment of a fairer and more supportive social system to avoid a deepening of inequalities.

The coronavirus pandemic has had an unprecedented impact on the lives of people in the Latin America and the Caribbean (LAC). The repercussions are particularly severe for low-income households. The health emergency declared in response to COVID-19 has completely disrupted everyday life, like in most countries around the world.

The magnitude of the crisis in the region has reopened debates on the role of the state, politics in general, and public policies in particular. While some predict the end of humanity, others argue that nothing will change. What is certain, though, is that we are in a phase of transition – our societies, in some aspects, will undergo reconfigurations in the short and medium term.

Forecasts by the United Nations Economic Commission for Latin America and the Caribbean (ECLAC) predict a 5.3 per cent fall in regional gross domestic product (GDP) by 2020 – the worst recession in the region in the last 100 years. Unemployment is also projected to rise by 12 million, in an area where fifty-three per cent of jobs are in the informal economy. This is particularly serious, given that few countries in the region offer unemployment benefits. In 2019, only Argentina, Brazil, Chile, Colombia, Ecuador, and Uruguay had unemployment insurance for workers in the formal sector.

The poorest are hardest hit

Given the economic and social inequalities in the region, the consequences of unemployment will disproportionately affect the poor and vulnerable layers of the middle-income population. Women will also be impacted more severely.

The collapse of health systems in many countries also emphasizes the need to move towards the consolidation of a universal health system – that guarantees quality and has the necessary resources to cope in times of crises. It should also take a comprehensive approach to health, accounting for the socio-economic situation of people and their quality of life.

The current economic model has generated inequalities and a high concentration of wealth. And in the absence of a universal welfare state, access to social benefits remains a privilege in the region. This was already a major problem before the pandemic, but it is now a question of survival. It is therefore essential, in the medium term, to rethink economic, social and labour policies, and to promote decent work and the universal fulfilment of social rights.

The current context opens the way for a debate on the need for a minimum basic income in the region. This should be based on the premise that access to essential goods is a necessary condition for the existence of a democratic citizenship, which guarantees the dignity of all. The LAC is the most unequal region in the world, and this health crisis is likely to accentuate these inequalities even further.

Finally, it is important to analyse the impact of the health emergency on gender inequalities. A central dimension of this is in the area of care – of children and the elderly – which can be seen as an expression of the division of labour between the sexes.

While lockdowns have proven to be effective to combat COVID-19, they have disrupted the dynamics of employment, domestic life and the way we care for children and the elderly. Workers in the informal sector, women and children have been especially affected. The containment has had a disproportionate effect on women’s lives, as they are mostly responsible for domestic and care work – tasks that contribute to the sustenance of households and have historically enabled the world to function.

According to figures from the International Labour Organization (ILO), 126 million women work in the informal sector in the LAC. That accounts for about half of the region’s female population. Informal work is synonymous with job insecurity, low incomes, and a lack of  basic protection mechanisms, particularly in a crisis like the current one.

The levels of informal employment are extremely high in many countries in the region. In Bolivia, Guatemala and Peru, eighty-three per cent of women have informal jobs with no  social security cover or protection under labour laws. Nearly forty per cent of working women in the LAC are employed in the retail, catering, hotel and domestic sectors. These are the most affected and the least protected jobs in the context of the current crisis.

As a result, a large proportion of Latin American women are going to lose their incomes in these difficult times, making their situation even more precarious. This could further widen the economic gap between women and men. For every 100 men living in extreme poverty in Latin America today, there are 132 women.

The lockdowns in the region have also resulted in an escalation of gender-based violence. We know that even in “normal” times, financial insecurity and social instability contribute to domestic violence. Social distancing and stay-at-home messaging was promoted under the premise that the home is a safe place for people to shield from the pandemic. But this was not the case  for many women and children.

Faced with these challenges, there is a need to ultimately build a new “social pact” – based on the recognition of solidarity and interdependence as fundamental values for the establishment of a fairer social system in the LAC. This crisis has highlighted the consequences of the commodification of public and common resources on our lives. The pandemic has  clearly demonstrated that states are not dead yet, and that they have a central role to play in the implementation of policies that are capable of effectively transforming everyday lives.

These public policies must address the continually-deferred challenge of building universal systems of protection. They should be focused on people rather than the market, and put life and health care at the centre. To meet this challenge, the state – and especially the social state – has a major role to play, as does the need for greater regional and international collaboration and co-operation.

Discover the efforts being made by member cities of the International Coalition of Inclusive and Sustainable Cities (ICCAR) to mitigate the impact of COVID-19 on vulnerable populations.

Lagos: the survival of the determined, The UNESCO Courier, June 1999

Child labour in the world today, The UNESCO Courier, October 1991