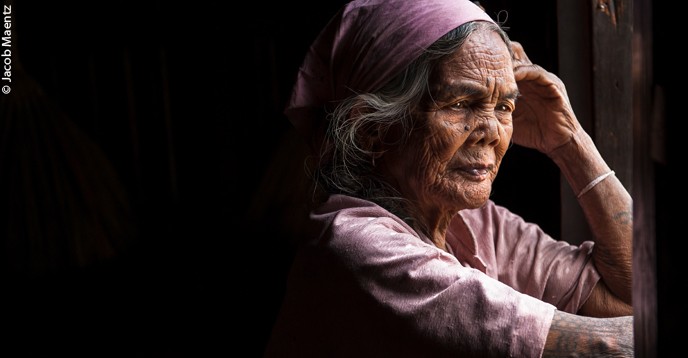 A woman tattooed according to the 1000-year-old Kalinga tradition, looks out of her window in the remote village of Buscalan in the Cordillera.

The global health crisis has highlighted the resilience of some indigenous communities. But above all, it has revealed the fragility of these populations – whose poverty, malnutrition and poor access to health care makes them particularly vulnerable to infectious diseases.

Minnie Degawan
Director of the Traditional and Indigenous Peoples programme at Conservation International in the United States.

Indigenous peoples have always isolated themselves from the rest of the world when circumstances required it. In the Cordillera in the Philippines, for example, such a practice – known as ubaya or tengaw – is regularly observed  at specific points of the agricultural cycle, to allow for the earth and the people to rest.

No one is allowed in or out of the community, including community members who happen to be outside when the lockdown was announced. A knotted clump of leaves is placed at various entrances and exits to signify that the community is on ubaya. It is taken very seriously by community members and neighbours alike – to violate it is to invite disaster for the entire community.

The rituals which accompany the ubaya are an important part of the community response. They are not meant to instil fear or invite evil, but serve to strengthen the sense of community, as the elders call for the protection of all, including nature. Similar rituals – which emphasize the need to achieve a balance between the spiritual and physical world – are performed by elders in different indigenous communities in the Philippines, Indonesia, Malaysia and Thailand to protect their villages. During these lockdowns, community members look out for those in need, and extend help and share food, including dried sweet potatoes that have been stored for a rainy day.

These traditional practices helped indigenous populations to cope with the containment constraints imposed by the COVID-19 epidemic and to organize their survival. “Their good practices of traditional healing and knowledge, such as sealing off communities to prevent the spread of diseases and of voluntary isolation, are being followed throughout the world today,” stated Anne Nuorgam, Chair of the United Nations Permanent Forum on Indigenous Issues (UNPFII).

But the health crisis has also acutely revealed the vulnerability of these communities. Indigenous populations – who suffer from a lack of health-care facilities and insufficient access to basic services, sanitation facilities and key preventive measures, including safe drinking water, soap and disinfectants – are the hardest hit by socio-economic marginalization that puts them at a disproportionate risk during public health emergencies.

Their continued struggle with deforestation, climate change and the loss of traditional livelihoods make them particularly vulnerable to new infectious diseases. Poverty, malnutrition, and a high rate of pre-existing health problems have aggravated the risks of these populations – many of whom dwell in multi-generational homes, in close proximity with their elders.

Testing their way of life

The pandemic has only exacerbated the multiple problems faced by indigenous populations. In northern Thailand, for example, forest fires are raging, adding pressures to food security, and threats to physical well-being. The Naga people in India’s north-east are faced with increased discrimination owing to their physical appearance and misconceptions about the virus. Naga students have been turned away from their lodgings and subjected to violence solely because of their Chinese features. The Dumagats of Southern Luzon in the Philippines dealt with food shortages while trying to stop the government from constructing the Kaliwa and Kanan dams in their territory. A similar story played out in Ecuador, where miners continued to pass through indigenous territories to extract oil, in spite of the lockdown.

But the current crisis is testing their way of life. Many cultural practices and traditions which call for gatherings and processions for events such as harvests or coming-of-age ceremonies, have been shelved in the interest of the safety of elders and the most vulnerable.

The efforts of governments to respond to the particular needs of communities are often sketchy, and do not address the long-term impacts on the livelihoods and survival of indigenous peoples as distinct populations. Some immediate steps must be taken to ensure that indigenous peoples are “informed, protected and prioritized” during the pandemic, Nuorgam stressed in a statement.

A key factor is to make sure that reliable and appropriate information is provided in indigenous languages. “The indigenous elders are a priority for our communities as our keepers of history and traditions and cultures,” the UNPFII chairperson added. “We also ask Member States to ensure that indigenous peoples in voluntary isolation and initial contact exercise their right to self-determination and their decision to be isolated be respected.”

Any intervention or plan must have indigenous communities at the centre, in terms of their agency and rights. They have emphatically demonstrated that where traditional knowledge is still being utilized – and when they are in full control of their resources, and freely exercising their right to self-determination – they are more able to protect themselves, and nature and their environments. This is also true in the face of new challenges.

“When you drink water, think of the source”: Indigenous Languages and Knowledge (IYIL 2019), The UNESCO Courier, January-March 2019

Listen to the voice of the lake, The UNESCO Courier, April-June 2018

My face, my land, The UNESCO Courier, July-September 2017