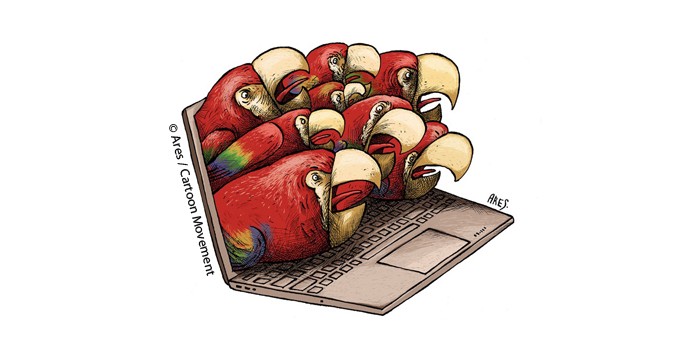 Disinformation and conspiracy theories have proliferated on social media during the pandemic. Black tea, neem leaves and pepper soup have been touted as miracle cures for COVID-19, in Africa and elsewhere. To combat this infodemic, digital platforms must be made more accountable, fake news tracked and called out, and media literacy developed.

Journalist and health researcher at the French-language website of Africa Check, based in Dakar, Senegal. The non-profit is Africa’s first independent fact-checking organization.

COVID-19, an unknown disease till 2020, has caused an unprecedented global health crisis. Many questions about this new virus still remain unanswered by scientists – including  the nature of immunity of those who have been infected, the seasonality of the virus, and its capacity to mutate. Our lack of knowledge about this disease and its evolution have fuelled a thirst for information, in Africa and elsewhere. It has also led to the proliferation of rumours, fake news and disinformation – with social media networks serving as sounding-boards.

The French-language office of Africa Check has been working to combat disinformation since the beginning of the outbreak. Using specialists and researchers to fact-check and verify stories, the Dakar-based website has published around fifty articles relating COVID-19.

In the absence of effective treatments for the disease, articles and messages about purported miracle cures have proliferated. Following research and claims by a French physician infectious diseases specialist, Didier Raoult, on the use of hydroxychloroquine as a cure for COVID-19, information spread through WhatsApp and Twitter in several West African countries that the leaves of the neem tree contained chloroquine. This sparked a mad rush for these leaves. However, the quinine derivative does not come from a plant, but is obtained through chemical synthesis. Similarly, black tea, pepper soup, vitamin C, and garlic have also been put forward on social media as foods that help prevent or cure the disease. The World Health Organization (WHO) has refuted these claims.

At the same time, the epidemic has led to the dissemination of images and videos that have been manipulated or taken out of context. Some of these have alleged, for example, that  vaccination campaigns could be forced, and are actually designed to spread the virus. Others seek to spread discrimination, targeting Chinese nationals in particular. A video showing the burning of a building containing shops in Ibadan, the capital of Oyo State in Nigeria, was wrongly portrayed as a reprisal against its Chinese owner. But a tweet from the Oyo State government clarified that the building was in fact owned by a Nigerian, and eighty per cent of those employed there were Nigerian.

In a spurious attempt to explain the emergence of the pandemic and its spread, stories of a Western conspiracy against Africa have been circulated by internet users across the continent. This was done, in particular, by hijacking the words of United Nations Secretary-General António Guterres, who warned in an interview with Radio France Internationale (RFI) on 27 March 2020 that COVID-19 could kill millions in Africa without immediate action. The theory of a vaccine funded by the Bill and Melinda Gates Foundation to control African populations also spread like wildfire. This information is not only blatantly false, it is deliberately designed to mislead.

The circulation of rumours and their consequences is not specific to the coronavirus crisis. In 2014, fake news provoked resistance to the response strategy to combat the Ebola virus in some of the affected countries.

In an article, “The ‘exceptionality’ of Ebola and popular ‘reticences’ in Guinea-Conakry,” published in 2015 in the journal Anthropologie & Santé, Sylvain Landry Faye explains that the first cases of deaths due to the virus in the same family had been interpreted as a sign of mystical punishment, or a curse brought on by committing a theft or adultery. These rumours fuelled beliefs that the disease was not real – making communities develop attitudes that rejected the response strategy put in place by the state and its partners to stem the epidemic. Other rumours portrayed Ebola Treatment Centres (ETCs) as contamination sites – places of death where bodies and organs were being trafficked.

In the case of coronavirus, social media and apps like Facebook, Messenger, and WhatsApp have given fake news an unprecedented impact. Besides providing global access to information, these platforms also allow their users to add or produce material  and circulate it in record time. Posted on 20 April (2020), the video on the Ibadan fire had been shared over 380,000 times three days later.

Other factors have also encouraged the circulation of rumours and fake news. In Senegal, for example, the traditional media’s focus on the number of people infected by COVID-19 and messages about the best way to prevent the spread of the virus did not fully satisfy the needs of citizens – who were looking for more positive news on possible treatments. So social media networks were employed to fill this void.

Fake news, which usually circulates in groups or circles of like-minded individuals, is easily  consumed and considered to be “well-sourced” information. Voice messages and texts are often attributed to personalities, authorities or hospital service providers – who use their false authority to offer simple solutions, like regularly drinking hot or salty water to disinfect the throat. So-called religious leaders can also play this role.

It is not always easy for the ordinary citizen to distinguish between information from traditional media – which follows the rigours of news collection, processing, and verification – and information available via social media, even when this is clearly inaccurate or misleading. The desire to believe – especially in times of crisis – can outweigh the desire to be informed.

The avalanche of fake news on social media, which the WHO has labelled as an infodemic, has prompted digital platforms to launch an offensive to stem the viral spread of false information. This is done by promoting content from official sources, or banning advertisements touting miracle cures. Journalists specialized in fact-checking, like those at  Africa Check and other fact-checking websites around the world, work hard to correct facts and guarantee reliable sources of information.

However, these efforts to stem the deluge of misinformation are clearly not enough. In May, the UN launched Verified, a global campaign which will create a cadre of “digital first responders” to share compelling, clear and accurate information about the crisis,and raise awareness about the risks of misinformation.

In 2019, Facebook launched a new flagging tool, allowing Instagram users to flag posts that they think contain fake news. It might also be a good idea to involve influential social media bloggers to raise awareness and train their administrators and moderators to combat false news.

Successful initiatives can be replicated. One example is Wa FM, an internet radio station set up in March 2020 to fight fake news on COVID-19 in Côte d’Ivoire. Broadcast primarily on WhatsApp, it relies on a network of around 200 volunteer journalists who walk the streets of Yopougon, a working-class neighbourhood in Abidjan – cross-checking information to correct fake news on social media, and to educate and raise people’s awareness.

To combat fake news, it is necessary to use the same channels that disseminate and feed it. In Africa and elsewhere, it is also necessary to encourage critical thinking in citizens regarding the information they receive. This could be done by encouraging them to question  information sources and the identity of the authors. Without this kind of media education, conspiracy theories and fake news will continue to spread unchecked.

Media and Information Literacy at UNESCO

Verified, a UN global initiative to provide reliable content during the COVID-19 crisis