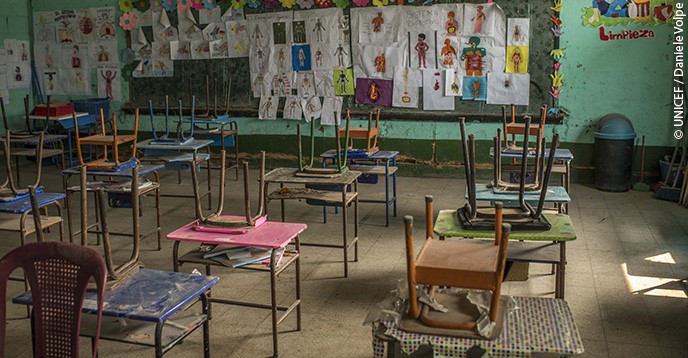 A deserted classroom at the Official Rural Mixed School in the Los Mixcos village of Palencia in Guatemala, April 2020.

The closure of schools and universities around the world to prevent the spread of the COVID-19 pandemic, caused a major education crisis that reached its peak in mid-April 2020. Between 16 and 19 April, schools shut down in more than 190 countries, affecting 1.57 billion children and young people – over ninety per cent of all learners. Throughout the health crisis, UNESCO monitored the situation globally, by publishing a map of school closures on its website.

The choice of digital distance education – to which the vast majority of countries have turned, to ensure educational continuity – has made the problem of the digital divide even more evident. Some 826 million – half the world's pupils and students – do not have computers at home and 706 million (forty-three per cent) are not connected to the internet. The lack of connectivity is of particular concern in sub-Saharan Africa, where the proportion of young people without internet access at home is as high as eighty per cent.

According to a recent UNESCO survey on measures taken by fifty-nine countries to mitigate the impact of school closures, only fifty-eight per cent of low-income countries have e-learning platforms. Sixty-four per cent of teachers in countries that responded to the survey (regardless of income level) do not have sufficient digital skills to deliver online education effectively. This is also the case for eighty per cent of parents and forty-eight per cent of students.

Mapping the World examines some of the initiatives to expand connectivity, taken within the framework of the Global Education Coalition, launched by UNESCO on 26 March 2020. Over 100 institutions from the public and private sectors have pooled their expertise to offer quick, free and appropriate solutions to countries that lack the technology, content, or skills needed for distance learning. 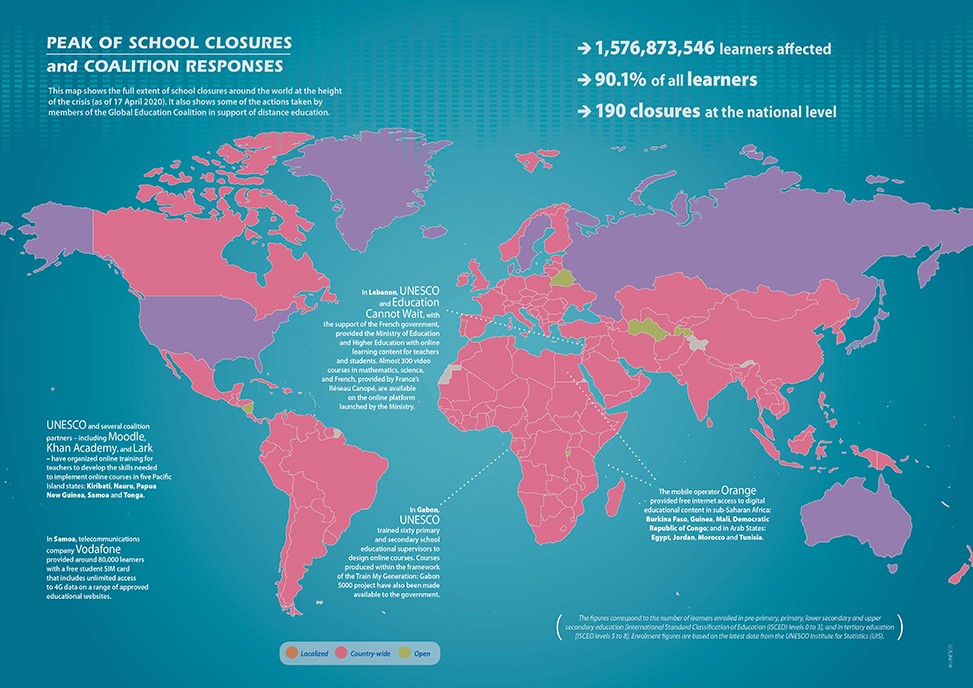 This map shows the full extent of school closures around the world at the height of the crisis (as of 17 April 2020). It also shows some of the actions taken by members of the Global Education Coalition in support of distance education.

● In Gabon, UNESCO trained sixty primary and secondary school educational supervisors to  design online courses. Courses produced within the framework of the Train My Generation: Gabon 5000 project have also been made available to the government.

● In Lebanon, UNESCO and Education Cannot Wait, with the support of the French government, provided the Ministry of Education and Higher Education with online learning content for teachers and students. Almost 300 video courses in mathematics, science, and French, provided by France’s Réseau Canopé, are available on the online platform launched by the Ministry.

● In Samoa, telecommunications company Vodafone provided around 80,000 learners with a free student SIM card that includes unlimited access to 4G data on a range of approved educational websites.