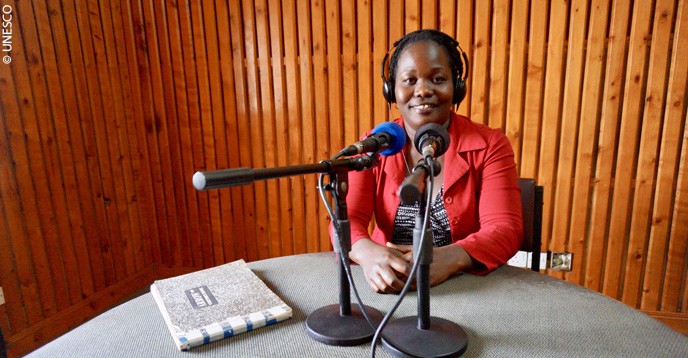 In a sound environment that has long been dominated by men, women have been slow to carve out a place for themselves. Yet, having been assiduous listeners from the start, they have played a central role in  shaping the history and content of radio.

In September 2019, the British Broadcasting Corporation (BBC) reported the story of Sediqa Sherzai on its website.  Based in the city of Kunduz in northern Afghanistan, Sherzai set up Radio Roshani in 2008. Run by women and promoting women’s rights, the station continues broadcasting today, in spite of death threats and other war-related challenges. Its phone-in programmes provide an important space and public platform for women’s voices and concerns. Radio Roshani is a powerful example of the strong relationship between women and radio today.

Since the 1920s, when radio was introduced into people’s homes, the medium has provided a space for women to be heard – literally and figuratively – in a largely male-dominated public soundscape. Radio bridged, connected, and blurred the boundaries between the private and public spheres and by doing so, spoke to women as housewives, workers, consumers and citizens. In many countries, the emergence of radio in the home also coincided with women gaining the vote.

Today, there is a growing body of historical research exploring this subject. Studies examining specific national contexts – from Argentina, Australia, Germany, Sweden, Turkey, the United Kingdom and the United States, for instance – have written women and gender back into broadcasting history. They have uncovered marginalized and often “hidden” histories of women in broadcasting, whose lives and work have been forgotten or ignored. They have recorded key developments in women’s programming, including changing definitions of the contested term, “women’s interest”, and highlighted debates on women’s voices – both on and off the air. Together, these histories point to the role of radio in the lives of women and how this relationship has contributed to processes of democratization and modernization.

Women have played a key role – both as broadcasters and listeners – in shaping radio’s general development and broadcasting practices. Programme formats and genres we now take for granted, such as serials and talk shows, were conceived for a female audience. In the US, in the 1930s, for example, where commercial radio dominated, women played an important role as consumers and became a target group for advertisers and sponsors.

Daytime broadcasts came to be characterized as “feminine” and soon, radio soaps dominated the airwaves because they were so lucrative. Michele Hilmes, Professor of Media and Cultural Studies at the University of Wisconsin-Madison and an expert on US broadcasting, has suggested that the gendered nature of daytime radio serials soon meant they offered a space for women. In her 1997 book, Radio Voices: American Broadcasting, 1922-1952, Hilmes writes that “under cover of daytime”, radio serials addressed and confronted issues and concerns facing American women in the 1930s and 1940s.

A similar trend can be observed in the magazine-style format. Woman’s Hour, introduced on BBC Radio in 1946, was the first dedicated radio programme for women in the UK. Topics such as “keeping house” and “childcare” were soon replaced by difficult issues facing women, such as politics and women’s citizenship. And quite early on, sensitive topics and taboos such as menopause and intimate relationships in marriage, were addressed.

Women have also contributed to the development of new formats, such as the social documentary. The British radio producer and broadcaster Olive Shapley (1910-1999), is an example of this. Her career began at the BBC in 1934, where she produced the Children’s Hour programme for the BBC’s North region, based in Manchester.

The depression in the 1930s had plunged many areas of Britain into poverty – this was particularly visible in and around Manchester. Shapley made good use of mobile recording vans that enabled her to travel across the region to interview people in their homes, on the street, or at work. Her documentaries were pioneering, both in technique and subject matter. Her aim, she said later, was to get “real people talking”.

Not long before the outbreak of the Second World War, Shapley produced a programme called Miners’ Wives, that explored the way of life in two mining villages – one in County Durham in the north-east of England, and another near Béthune, France. The programme was later translated and rebroadcast on the BBC’s French service during the war.

It was also during the Second World War that the first women war correspondents emerged. American radio journalist  Betty Wason (1912-2001) first travelled to Europe for the Transradio Press Service, a wire service that provided the news to radio stations. She was in Prague in 1938 when the Nazis took over the government, and reported on events there.

Wason was then hired by the Columbia Broadcasting System (now CBS) and was soon reporting on the Nazi invasion in Norway. She was later based in Greece. However, the pioneering reporter was told to get a man to read her reports on air. At the time, it was thought that women’s voices were not suitable for serious reporting. “They said women weren’t authoritative enough or sufficiently knowledgeable to handle serious subjects,” she later recalled.

Another radio pioneer was Audrey Russell (1906-1989). The BBC’s first woman war correspondent, she contributed war reports and interviews between 1941 and 1945. Russell focused on the experiences of civilians during the war, such as the impact of German long-range shelling over Dover and Folkestone, and the destruction of a V-2 rocket. However,  being a woman prevented her from reporting from the battlefront – that was reserved for her male counterparts. In spite of the obstacles they faced, Wason and Russell were both significant voices that challenged a space dominated by males.

During the Second World War, women’s radio programming played an important role in mobilizing morale on the home front, but was also used as a vehicle for propaganda abroad. For instance, US radio propaganda programmes were devised to target listeners in Latin America – whose resources, such as rubber and petroleum, were crucial to the US war effort –  to maintain good relations with the people and combat Nazi propaganda there. Research shows that Latin American women listeners were particularly targeted because they were perceived as being central to family values.

The idea that radio could bring women together across national boundaries gained currency after the war. Women were the driving force behind the creation of the International Association of Women in Radio in 1951 (a T for Television was added in 1957). The IAWRT, which still exists, was founded to promote peace by bringing women broadcasters together to share ideas and information. It was initiated by the Dutch feminist, economic historian and radio broadcaster Willemijn (Lilian) Hendrika Posthumus-van der Goot (1897-1989). Today the organization is a global network with members from fifty-four countries – focusing on gender equality, and working to enhance the role of women in media and communications.

The evolution of women’s radio programming has often been closely associated with the feminist movement. In the late 1940s and 1950s, for example, Woman’s Hour was connected with several women’s groups in Britain. In its early days, the IAWRT was also strongly linked to the international women’s movement through the International Council of Women (ICW).

These early examples may not have identified themselves as “feminist”, although in many ways they clearly were. World Radio Day in 2014 celebrated women in radio and women’s empowerment, but also noted that gender equality remained a challenge in the media industry.

There are several examples, though, of women’s activism on radio, with a clear feminist agenda. Norway’s radiOrakel, which claims it is the first feminist radio station in the world, was set up in October 1982 in Oslo – it is available today via FM and internet streaming. Its mission is to train women in areas including radio journalism and sound engineering. The station actively supports women as both interviewers and interviewees. It also stipulates that  at least half the music aired must be composed or performed by women.

Community radio stations also provide an important space for the empowerment of women. Often described as a “third” model of radio, since it offers an alternative to public and commercial broadcasting, community radio is generally not for profit. It is operated by volunteers and serves specific local communities that are often neglected by the mainstream media. As Caroline Mitchell, Associate Professor, Radio and Participation, at the University of Sunderland in the UK and co-founder of Fem FM, the UK’s first radio station for women, established in 1992, has observed, community radio offers “a space for women’s representation, participation and resistance.”

This reinterpretation of the role played by women broadcasters and listeners sheds new light on the history of radio. Leaving aside the obvious differences between Radio Roshani in Afghanistan in 2019, series broadcasts in the US in the 1930s, or radiOrakel in Norway  today, these examples are a clear indication that the medium has, from early on, been a powerful platform for women’s voices.

Senior Lecturer in Media History at Bournemouth University in the United Kingdom, Kristin Skoog is a co-founder of the Women’s Radio in Europe Network (WREN). Her research is centred on radio and media history, and the history of women’s radio and women broadcasters.