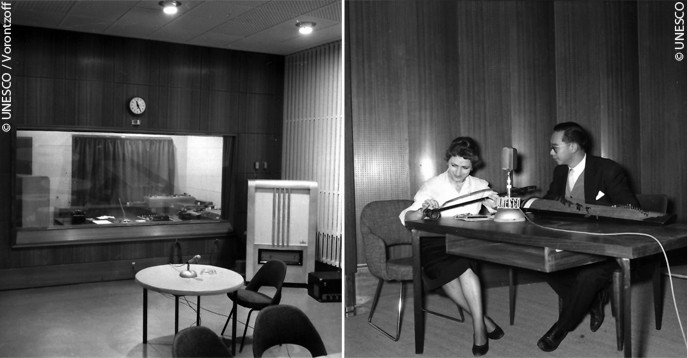 UNESCO Radio studios in the 1950s. Tran Van Khê, a specialist in traditional Vietnamese music, being interviewed in 1958 (right).

“I am at peace with what I wanted to do.” The voice is gravelly, partly muffled by the surrounding brouhaha. It is the voice of an elderly man, who speaks French with a Spanish accent – the voice of Pablo Picasso. Interviewed from Vallauris, in the south of France, the Spanish painter talks about the The Fall of Icarus, the monumental fresco he has just completed – and which will soon adorn UNESCO’s Paris Headquarters.

The recording dates back to 1958. It was produced by UNESCO Radio. This unique service   existed almost since the Organization's inception. In 1947, a recording studio was set up at its international Headquarters, which at the time, were located at the Majestic Hotel in Paris.

In the post-war context, radio emerged as a mass medium – capable of  transcending borders between countries, but also of removing certain barriers that stood between individuals, whether social, economic or cultural. The role of radio was also to promote a better understanding of the Organization's objectives and to help countries develop their own infrastructure.

Originally part of the Mass Communications Projects Division, UNESCO Radio did not broadcast its own programming, but produced shows – round-tables, interviews, documentaries, reports, and music – for broadcast by radio stations around the world.

The Masters Meet was one of these radio series. Personalities of different nationalities presented the work of writers, artists or scholars from other countries. The Hopes for Tomorrow series explored the possibilities offered by science, technology and certain cultural or educational programmes to provide solutions for humanity – from the exploitation of new sources of energy to the treatment of mental illness or the development of synthetic foods.

These programmes were recorded in a number of languages that would vary over the years. In September 1949, UNESCO Radio made recordings in seventeen different languages and distributed 3,000 programmes in fifty-two countries and territories. “UNESCO's voice is heard by listeners on all five continents,” the UNESCO Courier proudly proclaimed in its September 1949 issue.

At the time of its closure in 1997, UNESCO Radio was still producing some twenty programmes in English, French, Spanish and Russian. The thousands of sound documents that were produced over the years are being digitized, giving a second life to these recordings. Some 1,639 audio documents are now available online on the Digitizing Our Shared UNESCO History website.