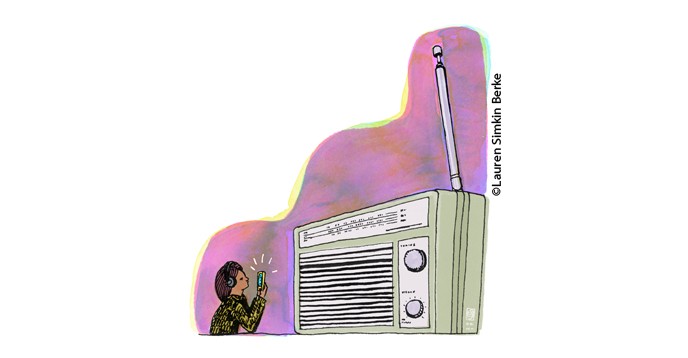 Social media networks now make it possible for radio audiences to comment on, and even influence, radio programming. But this citizen participation and seemingly innocuous interaction comes at a price – it allows large technology companies to collect lucrative data on our behaviours.

“The crucial failure of radio has been to perpetuate the fundamental separation between radio producers and their audiences, a separation that is at odds with its technological basis [...] audiences must be transformed into witnesses in interviews and conversations and must have the opportunity to be heard”.

Walter Benjamin, the German philosopher and literary critic wrote these words in 1930, conceiving radio as a tool to bridge the distance between the radio host and the listener. More than seventy years later, his words could perfectly describe what has happened to radio with the advent of social media.

Today, a radio station's audience must be understood as the sum of its listeners and those who follow it on social networks. While the first kind of audience still receives radio in a traditional way, members of the second set are connected to each other and to the host within a network. The  intersection of radio and social media heavily modifies both the vertical relationship between the host and the audience, and the horizontal relationship between individual listeners.

The network of friends/fans of a radio programme on Facebook, for example, constitutes its specific social capital. While the FM or digital radio audience, measured through traditional audience rating systems, constitutes the economic capital of the station, the social media audience represents its true social capital – one that is very ‘tangible’ and visible.

A wide social network is of great importance for the future of radio stations. Even if the fans’ network does not generate a tangible economic value like radio audiences do, it generates a significant amount of reputational capital. The crisis in traditional mass advertising will lead to a future increase and refining of tools for the capitalization of the wealth of these networked audiences.

While social media has helped to extend the reach of radio, it has also made it possible to give listeners a voice outside broadcast times. At major political and social events, listeners can now  transform into citizen reporters – using their smartphones to make audio and video recordings, and sending them to radio stations, or sharing them via Twitter or YouTube.

In fact, listeners have become full-fledged contributors to their radio stations. In Italy, the public service station Rai Radio 3 has built a large audience of followers on Twitter, who comment actively and passionately on its programmes. During the station’s classic press review each morning, a listener volunteers to live-tweet all the news he or she hears, so that those who are not listening in have continuous access to all the news of the day.

In France, Emilie Mazoyer, who used to be a host on the youth-oriented public radio station, Mouv' (she now works for Europe 1), co-created a music playlist, Tweet-Liste, together with her listeners and followers on Twitter, in 2011.

Listeners can now send audio messages recorded on WhatsApp, the free messaging service, to stations. Radio hosts then filter, select, curate and edit these contents before including them into the flow of their programmes. One Italian public service radio show even gathered life stories from their listeners through social media and turned them into a docu-fiction series. From 2015 to 2019, Rai Radio 2 aired Pascal, a programme which asked listeners to contribute true stories, based on their own lives. The stories were peer-reviewed, curated, and turned into brief docu-fiction episodes.

Listeners are more articulate today and “noisier” than in the past, producing more content than ever in the form of audio, video and text messages. But increased audience and citizen participation in radio production comes at a price.

This combination of radio and social media has also led to greater audience datafication. This is essentially an intensification of the process of collecting information on radio listeners who connect via social networks. All the content that is collected is measured and analysed, and then turned into a valuable dataset for the predictive analysis of user behaviour.

While in the past, it was the attention of listeners that was commodified and sold to advertisers, today it is the user data and content that have become commodities. This data represents a valuable asset for social network owners, especially since it is acquired at no cost – listeners are not compensated for the value they produce for the tech companies that own these platforms. And radio stations have no access to this data either.

Today more and more of us listen to the radio on smartphones, streaming devices and computers – and all our interactions take place through a keyboard or touch screen. Listening to radio content is no longer just an aural or visual activity. It is increasingly haptic – we touch the screen multiple times to open an app, access schedules, and to tune in to a station to listen to our favourite radio shows, live or on demand.

Each of these tactile activities generates a new mass of data that is extremely lucrative for social media platforms. The boundaries between the benefits of the emotional involvement that radio continues to offer and the exploitation of this connection by social media, are getting increasingly blurred. While we create new bonds with other listeners of the same radio programme on social networks, we are also commodified, and our passion for radio is converted into a goldmine for others.

The affective data – comments, emotional states, emoticons, likes – that we produce on social media are all indicators of our future behaviours.  It is also for this reason that today, more than ever in the past, public service radio and community stations are once again important, allowing a public involvement that is still authentic and outside the circuits of commodification.

A lecturer in Media Studies at the Department of Social, Political and Cognitive Sciences at the University of Siena, Italy, Tiziano Bonini’s current research interests are the intersection between radio, the internet and social media.