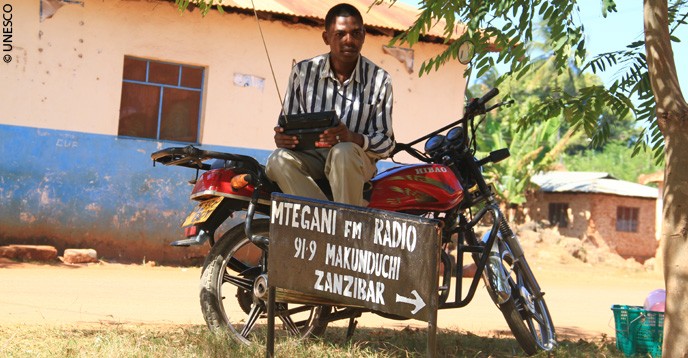 Mtegani FM, a community radio station, broadcasts from Unguja island in Tanzania. Supported by UNESCO, it takes part in social and economic activities and has 100,000 listeners.

The role of radio was already being discussed at UNESCO as early as in 1946, at its first General Conference. Julian Huxley, the first Director-General, described radio as “an agency which may jump across national barriers in a way impossible to any material medium.” This makes it an ideal vehicle for promoting peace and mutual understanding among people.

Lightweight, mobile and able to operate without electricity, radio also plays a key role in the aftermath of armed conflicts and natural disasters. Indeed, for over seventy years, UNESCO has been promoting this local medium par excellence – with its capacity to create links, speak to the greatest number, reach vulnerable populations and  cover remote areas, while promoting freedom of expression and information.

The Organization has a long history of supporting community radio stations, and endeavours to strengthen local radio through the use of information and communication technologies (ICTs). With funding from Sweden, UNESCO supported fifty-nine local radio stations in ten African countries (Burundi, Democratic Republic of the Congo, Kenya, Lesotho, Namibia, Rwanda, South Africa, Tanzania, Uganda and Zambia) between 2012 and 2018. The objectives of this long-term project included improving the quality of programming, strengthening the skills of journalists and technicians, providing training in the use of ITCs, and helping to improve geographical coverage through a network of local correspondents.

In Afghanistan, UNESCO helped to renovate the equipment of the Educational Radio and Television (ERTV) network, and to produce programmes, starting in 2007. More recently, UNESCO’s Beirut Office provided training in editing and broadcasting to young Syrian refugees in Lebanon, as part of its “Promoting an Enabling Environment for Freedom of Expression: Global Action with Special Focus on the Arab Region” programme, funded by Finland and Sweden.